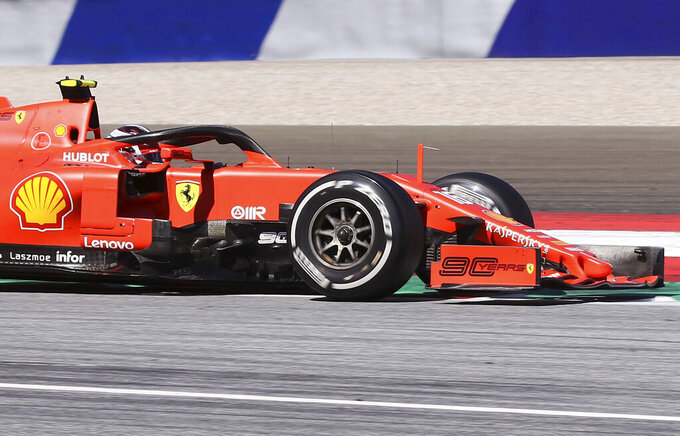 Chasing the leading trio, the Red Bull driver used all of his overtaking skills to get past Sebastian Vettel and Valtteri Bottas in the closing stages of the race before passing leader Charles Leclerc in a Ferrari with just two of the 71 laps to go.

However, Verstappen had to wait more than three hours after the race to get his win confirmed. Race stewards investigated the Dutchman's pass of Leclerc as the wheels of both cars touched in a duel full of excitement which was often lacking in recent F1 races.

Leclerc held off an attempt by Verstappen in lap 68, but failed to do it again the next lap. The cars came out of Turn 3 side-by-side when their wheels bumped, with Verstappen on the inside pushing Leclerc off the track.

FIA considered it "a racing incident" and "in the totality of the circumstances, we did not consider that either driver was wholly or predominantly to blame for the incident."

When still unaware of the verdict, Verstappen had denied any wrongdoing.

"The second time I braked a little bit deeper in the corner. From my side this is racing, it is just hard racing," Verstappen said.

Leclerc, however, claimed "the second overtaking was not done correctly. There was contact and I had to go wide."

The much-debated finish to the race came after Verstappen had to work his way up to the front of the pack after dropping down to eighth due to a difficult start.

"The start was disappointing but we never gave up and to come back like this is amazing," Verstappen said.

"This is very important, also for the future and for Honda as well," he added, referring to Red Bull's engine supplier getting its first victory in the hybrid era, which started in 2014.

"I am happy that it happened today. Maybe a few doubts go away. At the moment it is an amazing feeling," said Verstappen, who earned his sixth career victory.

Mercedes driver Valtteri Bottas completed the podium, ahead of Ferrari's Sebastian Vettel and championship leader Lewis Hamilton, who started fourth and lost time to replace the front wing of his Mercedes after 31 laps and finished fifth.

Hamilton posted the second-fastest time in Saturday's qualifying but was given a three-place grid penalty for impeding Alfa Romeo's Kimi Raikkonen. He started fourth as fifth-ranked Kevin Magnussen also lost five places for changing the gearbox in his Haas.

Starting from pole position for the second time in his career, Leclerc almost led the race from start to finish but ended up just missing his first career win.

He also looked set for victory leading in Bahrain in March, but he was hit by engine problems 10 laps from the finish and finished third.

Leclerc and Verstappen started the race 1-2 and, at an average age of 21 years, 265 days, they made for the youngest front row ever in a F1 race.

Verstappen seemed to lose hope of a repeat of last year's triumph when his Red Bull barely moved as the lights at the start switched to green. He immediately lost six places and complained over the team radio about "clipping," hinting at a lack of power likely due to a hydraulic issue.

Verstappen needed until the 10th lap to get back to fifth, behind both Mercedes cars and the Ferraris.

Battling for victory with Leclerc at the end, Verstappen had the advantage of fresher and thus quicker tires.

In what was widely regarded as a risky strategy, Ferrari started on the soft tires while Red Bull and Mercedes opted for the medium compound.

While the tires helped Leclerc hold on to his lead at the start, they were affected more by the heat than the medium ones on the Red Bull cars.

While Leclerc switched to the hard tires in lap 22, Verstappen pitted 11 laps later and the newer tires gave him an edge in the final laps.

"We stayed out (on the mediums) quite long. Once we came out again we had great pace," Verstappen said. "One-by-one we were overtaking the cars ahead. The car really came to life."

With track temperatures reaching 51 degrees Celsius (123 F), tire management was always going to be a key factor in the race.

Hamilton (six) and Bottas (two) had combined to win all eight previous races this season. Dating back to October last year, when Verstappen won the Mexican GP, Mercedes' winning streak consisted of 10 races, leaving the team one short of the all-time best mark set by McLaren more than three decades ago.

Ayrton Senna and Alain Prost won the first 11 races of 1988, the season that Senna won the first of his three F1 titles. Their winning streak was ended by Ferrari's Gerhard Berger.

The first Austrian GP since Niki Lauda passed away last month paid tribute to the three-time F1 champion from Austria.

Two of Lauda's championship winning cars, the 1975 Ferrari and the 1984 McLaren, were on display in the paddock and fan zone, respectively. Also, Turn 1 of the track was renamed "Niki Lauda corner."

In the stands, more than 50,000 of Lauda's trademark red caps were distributed.