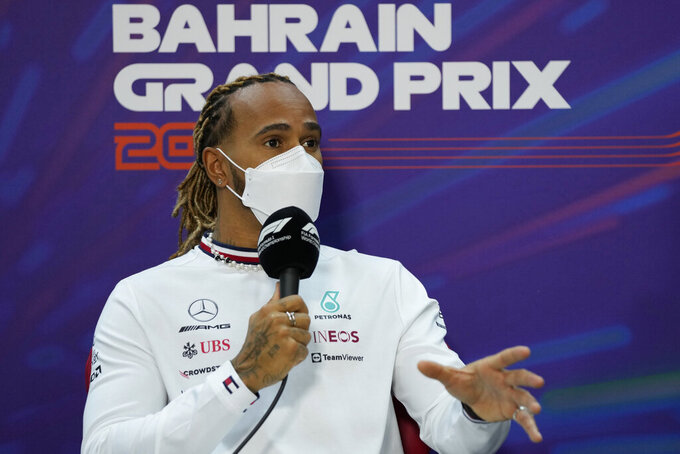 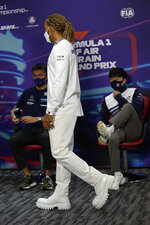 MANAMA, Bahrain (AP) — The son of a man on death row in Bahrain has again sent a drawing to seven-time Formula One champion Lewis Hamilton, still hopeful that the British driver can help save his father's life.

Ahead of Sunday’s season-opening F1 race in Bahrain, Ahmed proudly held up the drawing of Hamilton’s famed No. 44 Mercedes car along with his own words of hope: “ Sir Lewis, another F1 where my innocent father is on death row. Please help free him.”

The 12-year-old is the son of Mohammed Ramadhan, a former member of Bahrain’s security forces facing the death penalty.

The drawing was shown to The Associated Press by Ahmed, who was accompanied by his mother Zainab Ebrahim when they spoke during an interview on Thursday in Bahrain. Ahmed spoke softly as he talked about why he drew it.

“I did this drawing to encourage Lewis,” he said. Composing himself with a deep breath, he added: “There are lot of stories that Lewis can influence and can help change.”

Hamilton said he hadn't seen the drawing yet, which was also sent to his team.

“But each year I receive letters from those that are suffering and all I can is try my hardest to empathize with those who face these challenges and have these tragic stories to tell,” Hamilton said Friday at the Bahrain Grand Prix. “I think the weight of change really needs to be put on the governments and those that are in power. That's why we've got to continue to utilize the platforms we have when we arrive in these countries as well, make sure they are holding serious conversations about what's happening there."

Hamilton previously said F1 is “duty bound” to raise awareness on human rights where it goes racing. But he says drivers should also push for lasting change.

“We have platforms to try to raise awareness. There are amazing organizations out there on the ground that are fighting for human rights and I support those," Hamilton said. "But there's a lot of work to do, the world's a mess. We saw more displacement of refugees than ever before, not only in Ukraine, but in Syria and Yemen.”

Ahmed has previously drawn Hamilton's car and sent it to the star British driver, in the hope he can have an outcome on his father's future.

His father was one of three alleged torture victims who personally wrote to Hamilton in November 2020.

Mohammed Ramadhan detailed how he was arrested after supporting Bahrain’s pro-democracy uprising, and then allegedly framed in a murder case and beaten with iron bars in order to extract his confession.

After reading those letters Hamilton vowed not to ignore pleas to improve human rights in Bahrain and other countries where F1 races.

“Lewis is the best," Ahmed said, smiling timidly when asked what he thinks of Hamilton's ongoing efforts. “I was very happy to hear Lewis when he said that he is willing to help those in need.”

Ahmed's mother hopes Hamilton's voice screams even louder to those needing to hear it most.

“Lewis has an influence and he can talk to his friends, and he can influence the Bahraini government to reinvestigate and to talk about victims," she said as she sat next to her son. “Maybe find justice for their cases.”

For Zainab Ebrahim and her three children, visits to prison are rare and, as she explains wearily, so restrictive that they are barely able to touch even a finger on their father's hand to feel even the smallest connection with him.

“It’s very difficult without their father being here. When their father was arrested, Ahmed was four years old and the twins were two," she said. “That affected their psychology a lot. They’ve been crying a lot, feeling upset. They always ask about their father."

“Bahrain has a zero-tolerance policy towards mistreatment of any kind and has put in place a robust system to investigate complaints,” the NCC said by email. “Bahrain welcomes and actively supports the role Formula One can play in shedding light on human rights issues in all countries it operates in, now and in the future.”

Hamilton has inspired other alleged torture survivors like Najah Yusuf and Ali AlHajee, the other two who wrote to Hamilton in November 2020.

AlHajee is in Jau prison, 11 kilometers (7 miles) from the track where Hamilton races on Sunday.

Hamilton has been trending in the prison.

“Inmates began to write or draw ‘Sir 44’ or ‘Lewis 44’ on their clothes, which we would wear in support while watching the race,” AlHajee recently wrote to Hamilton. “The prisoners view you not only as a world sports champion, but as someone who is defending their human rights.”

Hamilton was moved when he read about it.

“I never in a million years thought I would be able to have this sort of impact on people, particularly in those positions, some of them with incredible stories fighting against a difficult system,” Hamilton said. “I really try to hold serious conversations in the background, to try and improve that system for those that are currently in prison. It's not an easy line to walk, it's risky, it's challenging, it's difficult relationships. But for me what's important is seeing a better future.”