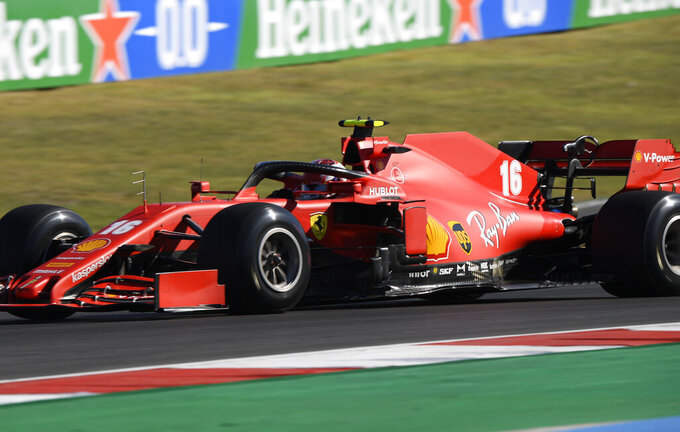 Bottas was .6 seconds quicker than Red Bull's Max Verstappen and .8 ahead of McLaren's Lando Norris. Ferrari's Charles Leclerc was fourth best, and championship leader Lewis Hamilton struggled for tire grip and was only eighth fastest, a considerable 1.37 seconds behind his teammate Bottas.

“The elevation changes on this track are incredible. There’s a lot of places where you just can’t see where you are going, so that’s very challenging,” Hamilton said. “The wind picked up, and I don’t know if it changed direction, but it made it tricky out there.”

Gasly parked his car on the side of the track when it suddenly caught fire. He scampered out unharmed and rode back to the AlphaTauri team garage on the back of a scooter as track marshals quickly put out the billowing flames. The session was suspended for about 15 minutes while a crane removed the car.

Soon after it restarted, the red flag came back out again following a crash between Verstappen and Lance Stroll's Racing Point car.

The drivers do not get on, and Verstappen was unhappy when Stroll would not let him pass on a straight, even though they are not racing each other in practice and so Stroll theoretically should have given way.

Because he did not, Verstappen then dived into the corner to gain position on him, but Stroll moved slightly right at the same time and Verstappen ended up crashing into the side of his car.

Stroll's car flew off into the gravel and was removed by crane, while Verstappen was able to continue. Both drivers were unharmed and summoned before the race stewards.

There was a near miss right at the beginning of second practice, too, when Kevin Magnussen nearly hit the McLaren of Carlos Sainz Jr.

Hamilton, meanwhile, struggled for grip during a tricky session on a new circuit. He comfortably leads the championship and his victory two weeks ago at the Eifel GP in Germany tied Michael Schumacher’s F1 record of 91 wins.

There were mask-wearing fans scattered around the 4.6-kilometer (3-mile) circuit in Portimao, which is undulating with frequent elevation changes. Overtaking is difficult.

It was used for preseason testing in 2008 but never before held an F1 race. It is the second new one on the coronavirus-hit calendar after the Tuscan GP in Mugello last month.

“It was quite slippery out on track, it reminded me a lot of when we went to Sochi or Austin for the first time, and we drove on the new tarmac there,” Bottas said. “This type of tarmac is tricky in terms of getting grip. Once you lose the grip you can drop the car quite quickly, and I think that’s the reason why we have seen so many spins today.”

In the first practice earlier Friday, Bottas was .34 seconds faster than Hamilton and .78 ahead of Verstappen.

Both he and Leclerc had problems with grip, with Leclerc going off track and into some gravel. The car was undamaged and he finished with the fourth best time.

Portugal last hosted a race in 1996, when three F1 champions made the podium after Jacques Villeneuve won ahead of Damon Hill and Schumacher.