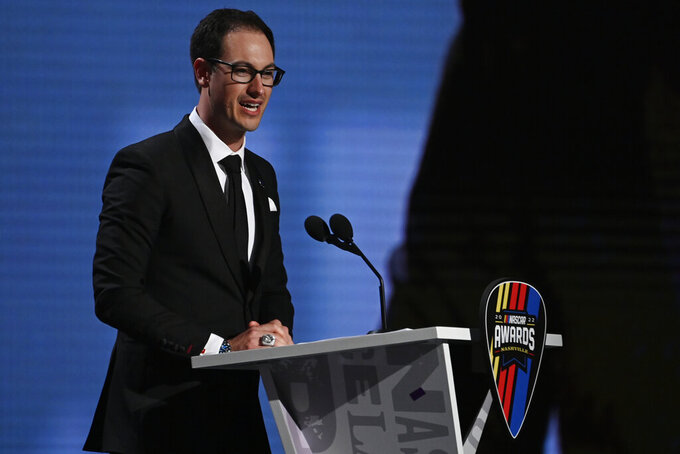 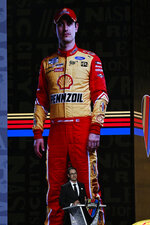 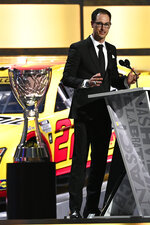 NASHVILLE, Tenn. (AP) — Joey Logano has a simple target for the future even as he celebrates his 2022 NASCAR Cup championship.

Logano this season joined Kyle Busch as the only active NASCAR drivers with multiple Cup series titles, adding to the first Cup championship he won in 2018. Being the only active driver with three Cup titles would be even sweeter.

“That’s where my head is at right is, ‘Let’s go get another one,’” Logano said Thursday before he was feted at NASCAR's annual awards ceremony.

Logano, at 32, was already the oldest of the four drivers in the championship finale. Credit— or blame — the new Next Gen car for evening out competition to where the Cup Series had 19 different winners, with five first-timers and two drivers making their first appearance in the championship race.

Logano won his second NASCAR championship by finishing first in a winner-take-all finale at Phoenix Raceway, giving Team Penske both the Cup and IndyCar titles in the same season for the first time in 31 tries.

Roger Penske, owner of Logano's No. 22 Ford, knows how hungry Logano is to win a third title. He's part of a roster that includes Ryan Blaney and Austin Cindric, who both made the playoffs with Team Penske, and Harrison Burton in an affiliate Wood Brothers Racing car.

“We’ve got the same team, so we should,” Penske said. "We should be able to compete now. A lot of great talent out there today. New talent, young talent. Teams and the cars brought us closer together. But I think we’re someone you’re going to have to beat in '23.”

The immediate celebration of his second Cup championship was a bit muted for Logano with the death of Joe Gibbs Racing vice chairman Coy Gibbs hours before that season finale. Logano started his career at JGR, where he spent four Cup seasons.

Coming to the NASCAR awards in Nashville allowed Logano time and space to really enjoy his latest championship.

He posed with the trophy on a bridge over the Cumberland River and suggested a visit to the NFL's Tennessee Titans, where Logano visited with two-time rushing champ Derrick Henry and swapped his helmet for a No. 22 Henry jersey. He also got to spend time on the team's practice field.

Logano said he loves picking up tips and ideas on how other people at the top of their sports work to stay there because he's learned that nobody, even in the same sport, sees or approaches things the same way.

“So it’s good to learn all that for sure,” Logano said.

Logano also knows he's among one of NASCAR's older current drivers and wants to embrace being more of a leader and help grow the sport. He's still young enough to relate to all the young drivers coming into NASCAR, yet old enough to remember what it was like over a decade ago.

“I feel like that’s a huge responsibility for all of us as an industry to care about the next generation of our sport," Logano said.

Kevin Harvick, the 2014 Cup champion, said Logano doesn't give himself enough credit for being a leader in the sport already.

“He has a voice that he uses and participates in a lot of the activities and things that it takes to help us progress forward,” said Harvick, the 2014 champion who once feuded with Logano. “It's been an interesting year to understand where everything is at, and I'm guilty of it as well and not participating in doing the things that we need to do.”

As Logano prepares to chase his third championship, Busch wore his two big championship rings because the NASCAR awards offer a perfect opportunity to flaunt what he's earned. Busch pointed out he can't wear them when he's getting into a race car.

“I might as well wear (them) when we come to the functions in which you can show people what they’re going after anyway,” Busch said.

Busch already has cleared out his gear from Joe Gibbs Racing after 15 years as he switches to Richard Childress Racing for the upcoming season. He admitted showing off the spoils of victory might offer motivation that works against him in the future.

“You know we’d love to get more,” Busch said.