Kevin Harvick will know if 2023 is final season by Daytona 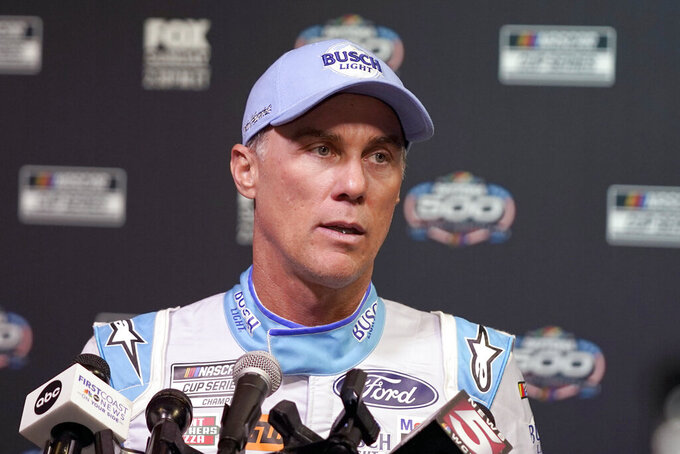 FILE - Kevin Harvick speaks during NASCAR Daytona 500 auto racing media day at Daytona International Speedway, Wednesday, Feb. 16, 2022, in Daytona Beach, Fla. Harvick will know if 2023 will be his final NASCAR season before he goes too Daytona in February. “I don't really have a clear answer on that right now,” the 2014 Cup champ said about his future Thursday, Dec. 1, before the NASCAR Awards. (AP Photo/John Raoux, File)

NASHVILLE, Tenn. (AP) — Kevin Harvick will know if 2023 will be his last as a fulltime NASCAR driver before the season-opening Daytona 500 in February.

“I don't really have a clear answer on that right now,” the 2014 Cup champ said Thursday about his future. “I think as we get to Daytona, I know 100% that we will have a direction because I'm not going to start the season without knowing that direction just because of the fact that there's just a lot of layers to unfold and really go through and evaluate. And so, we'll see. I think it could go either way at this particular point.”

Gene Haas said in October that Harvick had indicated he didn't plan to drive after his contract expires at the end of the 2023 season. Haas said Stewart-Haas Racing wants Harvick to sign an extension to return to the team co-owned by Tony Stewart.

Harvick won his lone Cup title in his first season with the team. He spent the first 13 years of his Cup career with Richard Childress Racing, and next season will be his 10th with SHR.

Harvick, who turns 47 next week, has 60 career Cup wins that include the Daytona 500, Coca-Cola 600, Brickyard 400 and Southern 500. Harvick snapped a 65-race winless streak at Michigan earlier this year, the second-longest drought of his career.

He's expanded his interests over the last decade to build a successful management company, and Harvick is thoroughly invested in the budding career of his 10-year-old son, Keelan.

Harvick has two championships at NASCAR's second level, in 2001 and 2006. He was only going to race for the Xfinity title in 2001 but the death of Dale Earnhardt in a crash in the season-opening Daytona 500 forced RCR to move Harvick into Earnhardt's ride.

Harvick competed in both series' that chaotic rookie season, winning twice in Cup and five times in Xfinity to win that championship. He has 47 career Xfinity Series wins and 14 victories in the Truck Series.