Hamilton sees a 'sign of weakness' when rivals doubt him 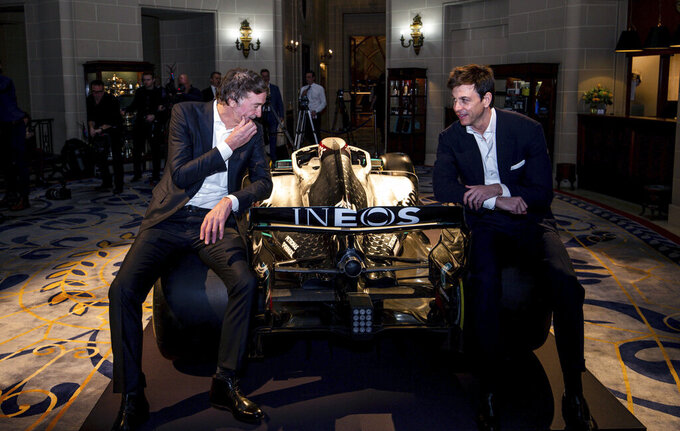 Toto Wolff, Team Principal & CEO of The Mercedes AMG-PETRONAS F1 Team, right, and INEOS Founder and Chairman Jim Ratcliffe pose for a photo with a Mercedes F1 car and its 2020 livery during a media briefing in London, Monday, Feb. 10, 2020. The Mercedes Formula One team is still waiting to secure a long-term commitment from world champion Lewis Hamilton. Wolff says he hasn't spoken to Hamilton since the Christmas party after agreeing to “leave each other in peace” in the offseason. Mercedes has longer certainty from its new sponsor INEOS, the chemicals giant owned by Jim Ratcliffe. (Steven Paston/PA via AP)

Formula One champion Lewis Hamilton sees “a sign of weakness” when his rivals start doubting his ability to handle pressure.

The Mercedes driver is aiming for a seventh F1 title this season to equal Michael Schumacher's record, and is seven race wins away from equaling the F1 great's other record of 91. Last season, Hamilton won a third straight title by 87 points over teammate Valtteri Bottas, who led early before fading.

Red Bull driver Max Verstappen finished third in another impressive campaign. The 22-year-old Dutchman won three races and had some close duels with Hamilton in Monaco and Hungary. Verstappen said last week he could beat Hamilton with the right car.

Hamilton was asked on Friday at Silverstone — where Mercedes was testing its new W11 car — what he made of recent comments about him.

“I find it funny seeing that. I have just always known to do my talking on the track,” Hamilton said in a video from the team's garage. “I tend to see that (kind of talking) as a sign of weakness.”

Two-time F1 champion Fernando Alonso previously said rivals were not exploiting Hamilton's weaknesses, but did not say what those were.

Mercedes has had the quickest and most reliable car since winning the first of six straight drivers' and constructors' titles in 2014. Ferrari was quicker at times last year — but on straight-line speed only. And it was the Honda engine-powered Red Bull making the biggest leap forward.

Verstappen is increasingly confident about what he could do in a car good enough to push Hamilton over a season, rather than a random race.

“Lewis is very good. He is definitely one of the best out there but he is not God,” Verstappen said last week. “When you can put the pressure on, of course it is a lot harder for the guy in the lead ... If you never really have pressure, you can drive at 97-98% and you never make mistakes, or maybe one weekend out of 21-22.”

He responded with a “Yes” when asked if he could beat Hamilton, but added that being able to do so “is very car-dependent.”

Hamilton has not faced sustained, season-long pressure since a tension-filled 2016 when then-Mercedes teammate Nico Rosberg clinched the title at the last race, then abruptly retired from F1.

The 35-year-old Hamilton has stepped up his off-season training to be in even better shape, telling fans online this week that he feels “physically and mentally on another level.” The first of two F1 preseason testing sessions starts next week.

“Last year I arrived into testing with a lot of water weight and around 78kg (kilograms),” Hamilton wrote on his Twitter account. “This year, I'm at a better weight of 73kg. Still have more fat to burn off and more muscle to add, but on the way."

The season begins with the Australian GP in Melbourne on March 15.