Hamilton has 2 championships but just 1 win in Mexico City 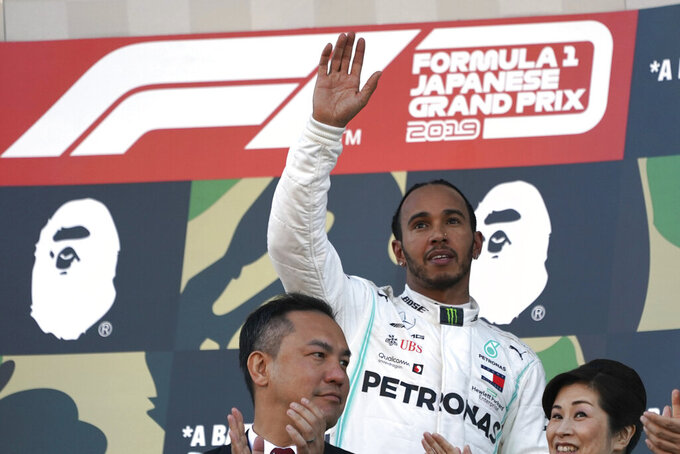 MEXICO CITY (AP) — For a place that has twice crowned him Formula One champion, Mexico City has not been particularly kind to Lewis Hamilton.

The massive crowds adore him and he's spun his Mercedes through the twisting curves on the stadium course to earn a place among F1's greatest drivers.

He just struggles to win here.

Hamilton has just one victory in four years at the Mexican Grand Prix and the last two races were among his worst outings in two title-winning seasons for Mercedes. He finished ninth in 2017 and fourth in 2018 as Red Bull's Max Verstappen raced away with victories.

Both of those results were good enough for Hamilton to limp across the finish line as the season champion. He got to parade with the Union Jack flag and pop champagne, but the celebrations missed the extra spice and thrill of a race victory.

It could happen again.

Hamilton will start Sunday in firm command of the season championship with a 64-point lead on teammate Valtteri Bottas and just four races left. It would take a stunning collapse over the back end of the season for Hamilton not to win a historic sixth career championship and fifth in six years. That would put the British driver in sole possession of second place in F1 history and one shy of the record seven held by Germany's Michael Schumacher.

But those past struggles leave Hamilton downplaying his chances of closing out the championship in Mexico City.

"I don't anticipate it will be Mexico," Hamilton said, adding his poor outings the last two years here have been "pretty shocking."

"Mexico is generally our worst race of the year because of the way our car is set up and it's going to be a tough one for us," he said.

Mexico City's thin air at 7,400 feet (2,255 meters) and the long straight out of the starting grid at the Autodromo Hermanos Rodriguez have favored Red Bull and Ferrari the last two years. And given Ferrari's power surge and three victories since the summer break, Hamilton points to the Italian team as the favorite Sunday.

Hamilton has just one win since the summer in last five races, a considerable drought for him.

"I'm hoping for a better weekend but I think it's going to be very hard to beat the Ferraris with those long straights," Hamilton said.

Ferrari will take the favorite's role and run with it.

"We arrive in Mexico determined to win," Ferrari Team Principal Mattia Binotto said. "We will be aiming for our sixth consecutive pole, before looking to convert that into a victory."

Hamilton's lone win here came in 2016 when he was in a desperate hunt to catch teammate Nico Rosberg in the championship. He rallied to push the title chase to the final race in Abu Dhabi, where Hamilton won and Rosberg won the championship.

Mercedes once again has the only two drivers who can win the championship, but none of the garage tension and turmoil between Hamilton and Rosberg that split the team in 2015 and 2016.

Bottas has three victories, including two weeks ago in Japan. He won two of the first four races of the season, before a midseason slump raised questions whether he would even be retained by Mercedes in 2020. Those ended when the Finnish driver finally got a contract extension in August.

There are multiple results combinations that could clinch Hamilton's championship Sunday if he finishes on the podium and 14 points ahead of Bottas. But any result with Hamilton fourth or lower automatically pushes the championship to next week's U.S. Grand Prix in Texas. Hamilton clinched the title there in 2015.

"Everything's possible," Bottas said. "Although I'm realistic as well that I will need to be very lucky, that's a fact, to win all the rest of the races."

Always a festive atmosphere with some of the biggest crowds of the F1 season, the Mexican Grand Prix will race with a sense of relief. The race had been in danger of ending this year at the end of its original five-year contract.

The federal government is ending its large financial subsidies. New investment from Mexico City business leaders and the local government will keep it on the F1 calendar through 2022. The race will be the Mexico City Grand Prix starting next year.