Graham Rahal turns to body contouring in battle of the bulge 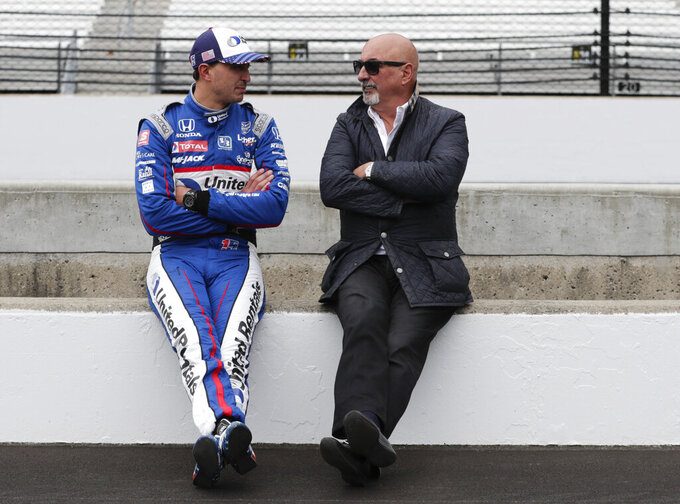 FILE - In this April 24, 2019, file photo, Graham Rahal talks with his father and car owner, Bobby Rahal, before testing at Indianapolis Motor Speedway in Indianapolis. Rahal is grateful for most of the genes he inherited from his father. The one he gene he could have gone without? His large frame. Rahal is the largest driver in IndyCar and revealed this week he's undergoing body contouring treatments in his battle with the bulge. He's had one treatment of "Sculpsure” and is committed to the process described as non-invasive, light-based technology that targets fat cells. (AP Photo/Michael Conroy, File)

MONTEREY, Calif. (AP) — Graham Rahal is grateful for most of the genes he inherited from his father, champion race car driver Bobby Rahal.

The one gene he could have gone without? His large frame.

Rahal is the largest driver in IndyCar and revealed this week he's undergoing body contouring treatments in his battle with the bulge. He's had one treatment of "Sculpsure" and is committed to the process described as non-invasive, light-based technology that targets fat cells.

"It is no secret, I'm not shy about this, that I've struggled with my weight," Rahal said Thursday. "I can guarantee you that from a strength perspective and a stamina perspective, there's very few guys out here that can keep up with me. I'm just not a super skinny build. It's never been my thing. I blame my dad. I do. It's a genetic thing. I got good genes in some ways.

"Very excited for someday when my career ends just to have a 'Dad Bod' and be able to let go for a minute, see how things turn out, because this is getting a little bit exhausting."

IndyCar, during each race weekend, requires drivers to weigh-in at technical inspection so the amount of ballast that must be added to create a common weight can be determined. Rahal, who is 6-foot-2, topped the scale in the most recent weigh-in at 201 pounds. The lightest driver in the field is rookie Santino Ferrucci at 121.

The weight differential matters because team engineers prefer to decide where in the car to add the ballast, but Rahal's size limits his team's options.

"I am the biggest guy here," he acknowledged. "Is it ever going to be equal for me? No matter what these guys talk about with driver ballast, it's a whole different thing, where my center of gravity is."

Rahal in January conceded his seat at the Rolex 24 at Daytona for Team Penske because he was not a comfortable fit in the car. He noted that regular Penske drivers Ricky Taylor and Helio Castroneves are roughly 60 pounds lighter than him, and "that's a big swing, a lot of weight to be carrying around."

The seat then went to Alexander Rossi, and Rahal recognized that Rossi could overtake him in Honda's rotation of drivers it uses in events outside of IndyCar.

He got a reprieve earlier this year when the steering column in the sports cars were moved and Rahal is now a more comfortable fit. He'll be back with Team Penske in the Acura at Petite Le Mans in Georgia in October. It was that race a year ago when Rahal realized he needed to give up the seat.

"Every time I'd turn the wheel any direction, my hands would hit my knees," he said. "While my pace in the race was very good there, and I had no problems being competitive, I was not comfortable. It's just that easy. If the car snapped loose, I could not catch it. It was not physically possible for me because I couldn't move my hands.

The relocation of the steering column has Rahal back in the Honda rotation for sports cars, but he said he's been focused this entire year on weight loss with no results. Rahal said he gave up alcohol for roughly four months and followed a strict diet and exercise program to no avail.

"I was working out every day, twice a day on most occasions," he said. "Went to a nutritionist, doing everything. I literally was not losing an ounce. It was the most frustrating period of time for me."

That led him to explore alternative methods, which brought led him to Sculpsure for his first treatment earlier this week.

"We're going to stay committed through the winter," he said. "I try my hardest every year, but I never tried harder this year to be thin. I weigh about the same as last year, but it took so much effort to get there. We have to try anything we can. If you're going to be serious, try to find the performance advantage and the edge, you've got to look outside of the box."