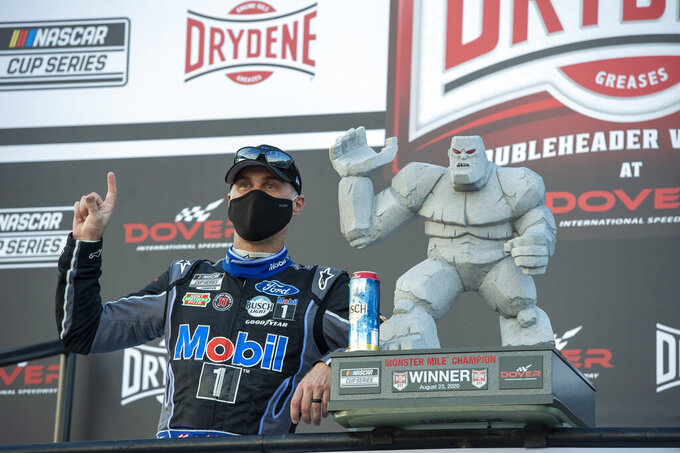 It brings the series full circle back to Darlington Raceway, where NASCAR resumed its season in May after a 10-week pause for the pandemic. The stock car series was one of the first major sports to return, with COVID-19 protocols and a relentless pace that got NASCAR back on schedule.

Kevin Harvick won that first race back at Darlington and three nights later it was Denny Hamlin in victory lane. The duo has not let off the gas since and returns to Darlington prepping for a head-to-head challenge for the championship.

Harvick won the regular-season title with seven victories, all after NASCAR resumed racing. Hamlin opened the year with his third Daytona 500 victory then won five more times. The rivals have combined for 13 wins in 26 races and should easily slide into the Nov. 8 winner-take-all finale.

“Everybody else is racing for two spots and not four," said Greg Zipadelli, the competition director at Stewart-Haas Racing, Harvick's team. "I think those two guys are going to go and run head-to-head and win races and move on. The curious thing is which team driver will step up in the next 10 weeks and match what they’ve done?”

There are 14 other drivers in the playoff field and not one has come close to the consistency shown by Harvick and Hamlin. Brad Keselowski won three times for Team Penske after racing resumed, and the organization has two wins from Joey Logano and one from Ryan Blaney.

Hendrick Motorsports has four wins: Two from Chase Elliott and one each from Alex Bowman and William Byron, who raced his way into the playoffs with his first career victory last Saturday at Daytona.

The rest of the field is all over the map.

Cole Custer is the only rookie in the playoffs and earned his first career berth with a surprise win at Kentucky. Matt DiBenedetto is also making his first career playoff appearance by pointing his way in at Daytona.

DiBenedetto gave Ford eight cars in the playoff field, well ahead of Chevrolet (five) and Toyota (three). The full four-car slates from SHR and Penske — DiBenedetto drives for Wood Brothers Racing, a Penske affiliate — all advanced as the Blue Oval brand took half the 16 slots.

“This is a big one making the playoffs for the Wood Brothers,” DiBenedetto said. “This is very big, really special and I’m glad we’ll be able to get to work and do the best we can the rest of the season.”

Does he have a shot? Probably not.

But DiBenedetto is one of four drivers in the playoffs without a firm contract for 2021 and a strong performance could earn him an extension.

Clint Bowyer, Aric Almirola and Byron are the only three free agents in the field, but Zipadelli said Monday the team is working on retaining the same four-car lineup next year (Harvick, Custer, Almirola and Bowyer). Byron's win at Daytona likely earned him a Hendrick extension, which could be announced as early as this week.

None are considered true threats to advance through the championship round.

So who could challenge Harvick and Hamlin? Well, reigning series champion Kyle Busch has made it to the final four the last five consecutive years. But he's shockingly winless through 26 races and hasn't caught much of a break. He was wrecked while racing for the win at Daytona last week.

The dark horse could be 2017 champion Martin Truex Jr., who has made it to the finale three consecutive years. Truex won seven races last year, has just one victory this season and has been outrun by teammate Hamlin.

But he's right there on the rear bumper of Harvick and Hamlin, and Truex hasn't finished lower than fourth in two months. If someone is a clear candidate to play spoiler to the favorites, it would be Truex and he's aware of his capability.

“I think everybody has forgotten about us and that’s a cool spot to be in for us. We look forward to that," Truex said.