AUTO RACING: NASCAR playoff race down to the nitty gritty 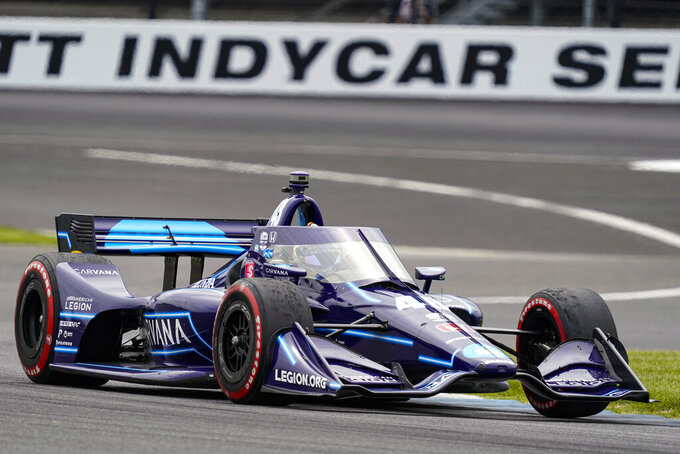 FILE - In this May 15, 2021, file photo, Jimmie Johnson drives through a turn during the IndyCar auto race at Indianapolis Motor Speedway in Indianapolis. Johnson is hopeful of testing in August at Homestead-Miami Speedway as part of a path toward running in the Indianapolis 500 in 2022. The seven-time NASCAR champion jumped this season to IndyCar and has competed in seven races for team owner Chip Ganassi.(AP Photo/Michael Conroy, File)

Go Bowling at The Glen

Last race: Aric Almirola won at New Hamphire, jumping from 27th in the point standings to a berth in the playoffs with his third career victory.

Fast facts: With four races left before the 16-driver playoff field is set, Denny Hamlin tops the standings, leading Kyle Larson by 13 points and William Byron by 125. Kyle Busch is fourth, 134 behind, and Joey Logano is 141 back. ... There are three automatic berths (by victory) left in the postseason field and the frontrunners are Hamlin, Kevin Harvick and Tyler Reddick. ... Harvick (9) and Hamlin (7) combined for 16 wins last season but have none this season. ... Austin Dillon is five points behind Reddick for the last playoff spot.

Fast facts: Bell won both stages as well as the race and has won three straight races in New Hampshire. His victory was the sixth in a row for Joe Gibbs Racing there. ... There are seven races remaining before the 12-driver field for the playoffs is set. ... Defending series champion Austin Cindric leads A.J. Allmendinger by 82 points through 19 races. Daniel Hemric is third, 113 points back. ... Seven series regulars have won this season.

Last race: Austin Hill earned his first victory of the season in the series’ debut on the half-mile dirt track in Knoxville, Iowa.

Fast facts: This is the final race before the 10-driver playoff field is set. ... John Hunter Nemechek leads Ben Rhodes by 85 points and Hill by 95. ... Only five regular series competitors have won races through the first 14 on the schedule and Nemechek's five victories match the total of the other four winners combined.

Last year: Did not race in Nashville.

Fast facts: Through 10 of 16 scheduled races, Alex Palou leads Pato O'Ward by 39 points in the driver standings. They are the only two-time winners so far. ... Six-time champion Scott Dixon is third, 56 points back. ... There have been seven different winners, but winless Simon Pagenaud is sixth in points, ahead of one-time winners Colton Herta and Rinus VeeKay.