'The noose was real' - NASCAR releases photo from Talladega 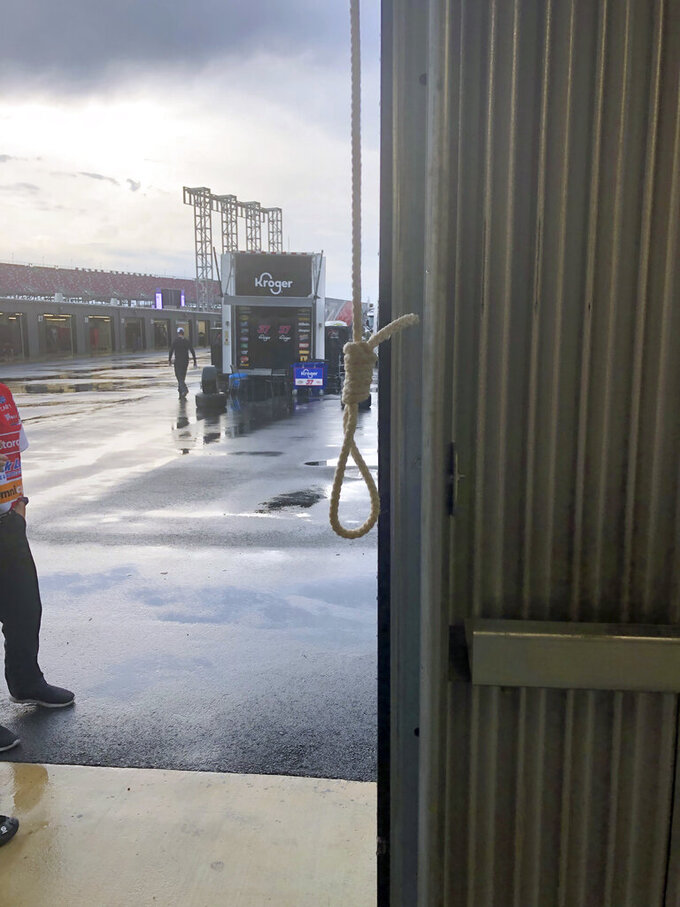 Declaring “the noose was real,” NASCAR officials on Thursday released a photo of the rope found in the speedway garage stall of Black driver Bubba Wallace that prompted a federal investigation into whether he had been the target of a hate crime.

The incident has put racism front and center for the stock car series that two weeks ago banned the Confederate flag from its venues and races at Wallace’s urging. It also prompted criticism from some fans that NASCAR had somehow overreacted — criticism NASCAR has bristled at and cited in releasing the photo from Talladega Superspeedway in Alabama. The image was taken by NASCAR security.

“As you can see from the photo, the noose was real, as was our concern for Bubba,” NASCAR President Steve Phelps said. “Based on the evidence we had, we thought our drivers — that one of our drivers had been threatened, a driver who had been extremely courageous in recent words and actions. It’s our responsibility to react and investigate, and that’s exactly what we did.”

NASCAR has been rocked by racial tension since it banned the Confederate flag. Angered fans flew the flag last weekend outside Talladega and flags that once flew openly around the infield were still for sale across the street. A small plane flew over the track pulling a banner of the Confederate flag that said “Defund NASCAR.”

NASCAR asked officials at every track to check their garages this week. Out of 1,684 garage stalls at 29 tracks, only 11 had a garage door pull-down rope tied in a knot, Phelps said, and the only one fashioned in a noose was the one discovered Sunday by a crew member in Wallace’s No. 43 stall.

NASCAR moved quickly and by Monday, FBI agents were at the track. On Tuesday, authorities said the rope had been hanging there since the Cup Series race last October and thus was not a hate crime targeting the 26-year-old Wallace.

U.S. Attorney Jay Town and FBI Special Agent in Charge Johnnie Sharp Jr. said “nobody could have known Mr. Wallace would be assigned” to that same stall.

Wallace never saw the rope. He said Phelps came to see him Sunday night at the track with “tears running down his face.” He also told CNN: “ It was a noose. Whether it was tied in 2019 ... it is a noose. ”

Phelps said NASCAR had determined the noose was not in place when the October 2019 race weekend began but was created at some point during that weekend.

“Given that timing and the garage access policies and procedures at the time, we were unfortunately unable to determine with any certainty who tied this rope in this manner or why it was done," he said.

The Wood Brothers Racing team was in the same stall during the October race and it cooperated with the investigation. An employee recalled “seeing a tied handle in the garage pull down rope from last fall.”

“We could not determine whether it was someone on their team or someone else,” Phelps said. “We have no idea what the intent was at all, whether there was any malice in it or whether it was just fashioned as a noose for a pulley. We don’t know that.”

NASCAR’s investigation is over, Phelps said, and cameras will be added to garages moving forward. NASCAR will also require members of the industry to complete sensitivity and unconscious bias training.

NASCAR heads this weekend to Pocono Raceway in Pennsylvania and will increase security around Wallace, who has received death threats and been accused of perpetrating a hoax.