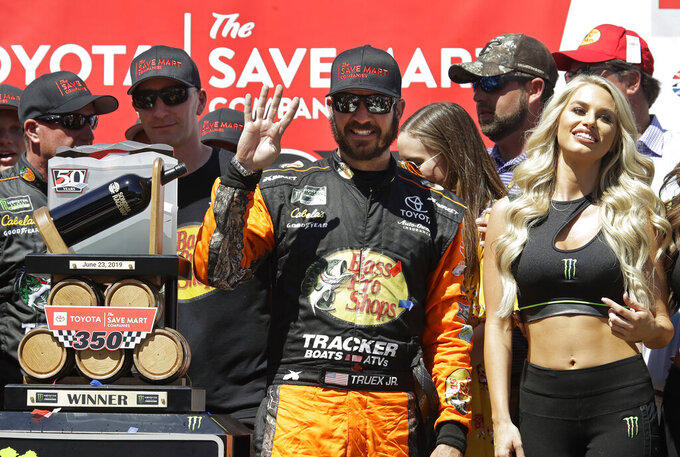 SONOMA, Calif. (AP) — Martin Truex Jr. and Kyle Busch have managed to keep their long-standing rivalry quite friendly during their first season as teammates at Joe Gibbs Racing.

It's a bit easier for Truex to be a gracious winner — and for Busch to be somewhat content with second place — when their two Toyotas are blowing away the rest of the NASCAR Cup Series field by a full 31 seconds, as they did on a dominant Sunday in wine country.

Truex won on the hilly road course at Sonoma Raceway for the second straight year and the third time in his career, comfortably holding off Busch for JGR's 10th victory of the season.

Truex won for the fourth time in the last eight points-paying races, earning his 23rd career victory overall. Busch also has four wins this season, putting the two veteran drivers in position for a long summer of friendly competition.

"We race as hard as we can possibly race on the race track, and we respect each other off it," Truex said. "That works out pretty good."

Although Busch is a vicious competitor, he had perspective on this result after failing to find a way to make a late push past Truex. Their careers have intersected regularly since 2004, when Truex held off Busch to win the Busch Series championship.

"It (stinks) to finish second to a teammate, but it is good for the company," said Busch, who has four top-five finishes in the last five years at Sonoma. "Overall, Martin is really good here. I'm just pumped that I actually ran good."

Truex and Busch finished 1-2 for the seventh time in their careers, and they were the class of the final stage in a caution-free race. While JGR isn't overwhelming its foes in the points standings, it hopes to build on its strong Northern California performance into the summer.

"What a season we've turned this into," said Truex, who has won with three different team owners at Sonoma. "This group, man, they're unbelievable. Hopefully we can keep it going."

After Hamlin won the second stage, Truex got the lead early in the third stage, and Busch didn't follow Truex into the pits for the final stop. When Busch finally pitted four laps later, Truex reclaimed the lead with 23 laps to go. Truex opened an 8-second advantage and held off a strong push by Busch to win by 1.861 seconds.

More things to know about Sonoma:

DiBenedetto gave an impressive performance after starting in 19th, patiently picking his way up the field with an impressively fast Toyota. The Northern California native had family and friends in the stands to watch his feat.

Series points leader Joey Logano had battery problems and had to pit with 15 laps to go. He finished 23rd. Chase Elliott started fourth and ran near the front for much of the day before his engine apparently blew early in the final stage.

The drivers had little trouble navigating "The Carousel," the extra turns inserted into the NASCAR layout for the first time since 1997. The layout is expected to be a permanent part of the NASCAR race now.

Busch isn't typically an apologetic driver, but he gave his regrets to Blaney for bumping him from the back during the final stage. "Sorry, homie," Busch said to Blaney after the race, explaining that he had been mentally picturing the pre-Carousel layout after the third turn and had been too aggressive. Blaney accepted the apology.

Nearly every driver spared a post-race moment to bid farewell to Darrell Waltrip, the Hall of Fame driver who had just called his final race in the Fox broadcast booth. Waltrip has been continually involved in the sport for longer than any current driver has been alive, and everyone from Truex to DiBenedetto credited the personable Waltrip for helping and encouraging their careers.

Truex got to raise the winner's goblet full of red wine for the third time in his career, but the New Jersey native still hasn't warmed up to Northern California's signature beverage. "I just don't like wine," he said. "I'm sorry. It's the best damn wine I've ever had. I just don't like it."

At Chicagoland Raceway on Sunday, June 30.