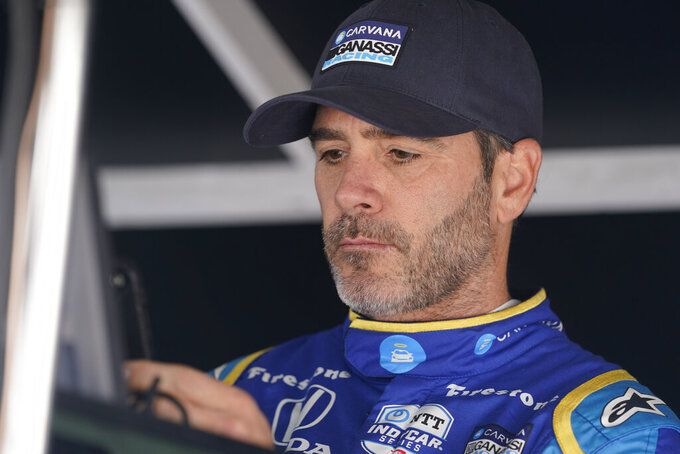 Jimmie Johnson sits in his pit box before the final practice for the Indianapolis 500 auto race at Indianapolis Motor Speedway, Friday, May 27, 2022, in Indianapolis. (AP Photo/Darron Cummings) 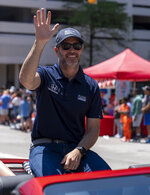 CHARLOTTE, N.C. (AP) — From Italy to Iowa to the simulator and finally the Finger Lakes, there’s been no rest for Jimmie Johnson. He heads this weekend to Watkins Glen for one of this final two scheduled appearances in the IMSA sports car.

Then he’ll turn his attention to planning his 2023 schedule, which Johnson hopes includes a spot in the 24 Hours of Le Mans.

NASCAR, Hendrick Motorsports and Chevrolet plan to take a stock car to Le Mans next June in a special Garage 56 class designed to showcase the innovation of NASCAR's new Next Gen model. The prestigious endurance race is scheduled for June 10-11, or two weeks after the Indianapolis 500.

Johnson wants to be part of the lineup but his participation, he said, is dependent on the 2023 IndyCar schedule — an indicator the seven-time NASCAR champion still very much plans a third season of open-wheel racing.

Johnson copped this week to “behind-the-scenes” pushing of IndyCar president Jay Frye to ensure the series is off during Le Mans.

“I want to go to Le Mans. But I think so much hinges on the schedule being released to understand if I can," Johnson said. "I know that there’s interest. I certainly have a ton of interest to do it. We’re just waiting for that first domino to fall.”

Johnson, who drove for Rick Hendrick for nearly two decades, believes he's on the list of Le Mans candidates.

“I feel like the interest is really high on both sides," he added. "We haven’t been able to talk anything more formal because the schedule is not out.”

With everything in limbo, Johnson has turned to the dog days of his current racing schedule. IndyCar raced five consecutive weeks before a two-week break, which allowed Johnson to take his wife and two daughters to Italy for a quick vacation.

But the 46-year-old had to head back for a Monday test at Iowa Speedway, a rare oval that Johnson has never before raced. He was bleary-eyed and chugging coffee during a media session this week explaining how his next stop was the simulator to prepare for this weekend's Six Hours of the Glen, the third of four IMSA endurance races Johnson built into his schedule in an alliance between Hendrick, Action Express Racing and sponsor Ally.

Johnson missed the Twelve Hours of Sebring in March because it conflicted with IndyCar's stop at Texas Motor Speedway, his open-wheel debut on an oval, so his return to the No. 48 Cadillac this weekend is a reunion with teammates Mike Rockenfeller and Kamui Kobayashi.

He had a short stint in the seat at Watkins Glen a year ago and isn't sure how much Chad Knaus, his former NASCAR crew chief and head of the No. 48's IMSA program, will use him Sunday.

“A six-hour race with three drivers, there’s not a lot of drive time, period,” said Johnson. "I think the time I spend in the car ultimately depends on my pace.”

Johnson doesn't know what his 2023 schedule will look like but hopes it includes another full IndyCar season and, at minimum, IMSA endurance races.

His return to IndyCar depends largely on funding. Johnson found Carvana on his own to back his transition from NASCAR champion to IndyCar rookie, and ran only the road and street courses last year. He added ovals this season, and made his Indy 500 debut last month.

Although he was considered a threat to win his first 500, he wrecked late and finished 28th. He's continued to struggle on road and street courses, which led to a Johnson-debunked report that he will only run ovals next year.

“I’m not sure where that has come from. It has not been in any discussions I’ve had or thought processes I’ve had,” said Johnson. “What I’ve been doing has been so much fun and enjoyable. Continue to get better. Certainly hope to do something similar again next year.”

Anything he does in 2023 will come down to sponsorship, scheduling and 2023 rules changes planned for sports car racing. The prototype DPi class will be replaced with a new LMDh class that will make IMSA's top category eligible to race at Le Mans.

But with the change comes concern there won't be enough initial chassis and parts for partial- schedule teams.

“We’re still in this phase with IndyCar, sports car or any other ideas I have to go racing. Everything right now is people are just starting to talk about options," Johnson said. "It’s usually end of summer, beginning of fall when paper starts moving around and people are looking to ink stuff and get it done. We’re just early in the cycle, and I’m certainly trying to keep my options open.”