How The Chicks dropped the word 'Dixie' from their name 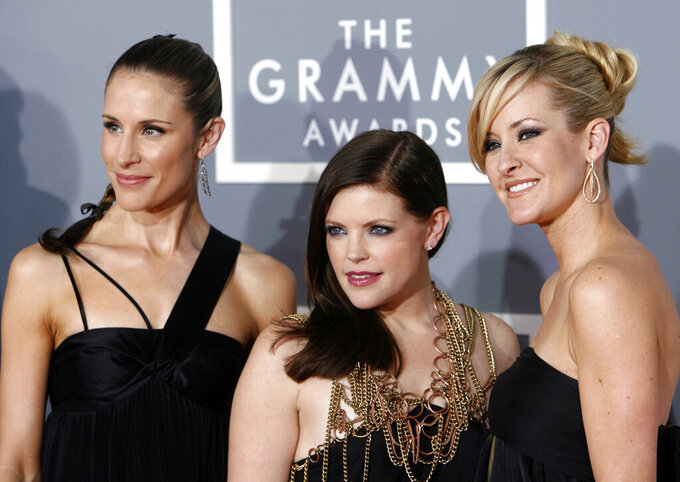 NASHVILLE, Tenn. (AP) — When The Chicks decided to drop the word “Dixie” from the band's name, it was the culmination of years of internal discussions and attempts to distance itself from negative connotations with the word.

The 13-time Grammy-winning trio made the switch last month, just weeks before the release of their first new music in 14 years.

The band was formed in Dallas, Texas, in the late 1980s by sisters Martie Maguire and Emily Strayer with Laura Lynch and Robin Lynn Macy as a bluegrass band.

“We were totally working the kitschy cowgirl clothes and everything at that stage in our career, big hair, you know,” said Strayer. “And so we had like cowboy hats on playing down on street corners.”

But they started getting requests for bookings and they needed a name. “That Little Feat song, ‘ Dixie Chicken,’ came on the radio. And so we were the Dixie Chickens for like maybe six months,” Strayer said.

Maguire, though, hated being called a chicken, Strayer said. So it got shortened to just chicks.

They released three independent albums before Natalie Maines became the lead singer. The band signed a seven-record deal with Sony and again, they questioned whether to continue as The Dixie Chicks. Strayer even wondered if the word “chicks” was too derogatory to women, but ultimately felt it was empowering.

“When we signed to Sony, we thought about it again and (the label was) like, ‘No, it’s alliterative, it’s catchy, it’s you. There’s history here,’" said Strayer.

As the years progressed, the more they tried to distance themselves from the word. They started calling themselves The Chicks on merchandise and on their last tours they referred to themselves as DCX.

“It means different things for different people,” said Strayer. “But if it does make a statement that is derogatory to certain people, us included, we were just like, ‘This doesn’t feel right anymore.’"

But in 2020, the band saw how the death of George Floyd was leading many to re-evaluate associations with racist symbols, like the Confederate flag, sometimes called the rebel flag or the Dixie flag.

“I think the sort of now moment for me was when NASCAR banned the Dixie flag,” said Maines. “It just struck me as, ‘OK, we’re doing this now. No more overthinking. No more hesitation. Now is the time.'”

But it's not as easy as just changing a name, as evidenced by the legal conflict that came out of country group Lady A's decision to drop the word “Antebellum" only to find out that a Black woman had been performing as Lady A for years. The Chicks did some research and found a female duo in New Zealand had been using the name The Chicks for decades.

The two parties now have a co-existence agreement for both of them to continue using the same name.

“They’re being very gracious,” said Strayer. “They’re the national treasure of New Zealand, so we hear. And so we wanted to be very respectful of that.”

Now they have new merchandise with their new name for sale, although some first pressings of their upcoming record “Gaslighter” on vinyl still have the old name.

For the band, they feel like a weight has been lifted with the new name.

"I think one of the words we kept using was relieved," said Maguire.