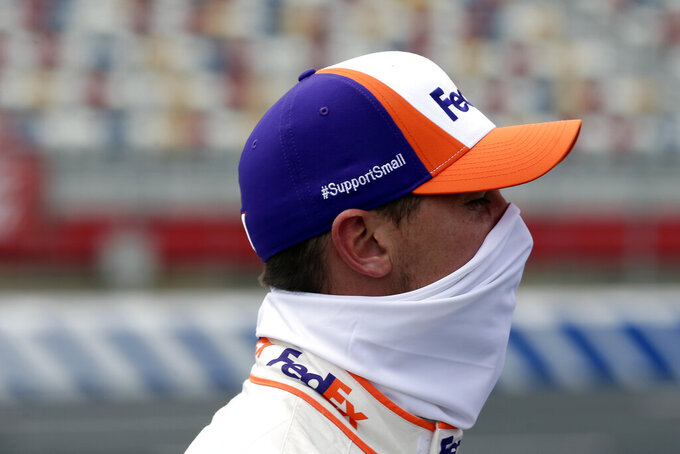 CHARLOTTE, N.C. (AP) — NASCAR on Monday suspended three critical crew members for Denny Hamlin's team because a piece of tungsten fell off his car on the pace lap before the Coca-Cola 600.

The tungsten is required to meet minimum weight requirements on the car and the NASCAR rule book states if it is separated at any point it is an automatic four-race suspension for the crew chief, car chief and engineer.

Joe Gibbs Racing said it would not appeal the penalty and already had roster replacements for Wednesday night's race at Charlotte Motor Speedway. Sam McAulay will be the crew chief, while Eric Phillips will be car chief and Scott Eldridge the engineer.

NASCAR's next four races are at Charlotte, Bristol, Atlanta and Martinsville between Wednesday night and June 10, when the suspension ends. NASCAR is trying to squeeze in eight postponed Cup events from a 10-week suspension for the conavirus pandemic.

The piece of ballast added to the car weighs 35 pounds and costs $1,877 from the supplier. It fell off the Joe Gibbs Racing Toyota before the start of Sunday's race and Hamlin went to pit road for additional weight to be added back to the car. He didn't join the race until eight laps had been completed.

He rallied to a 29th-place finish in the 40-car field.

Hamlin won not only the season-opening Daytona 500 but also won last Wednesday night at Darlington Raceway.