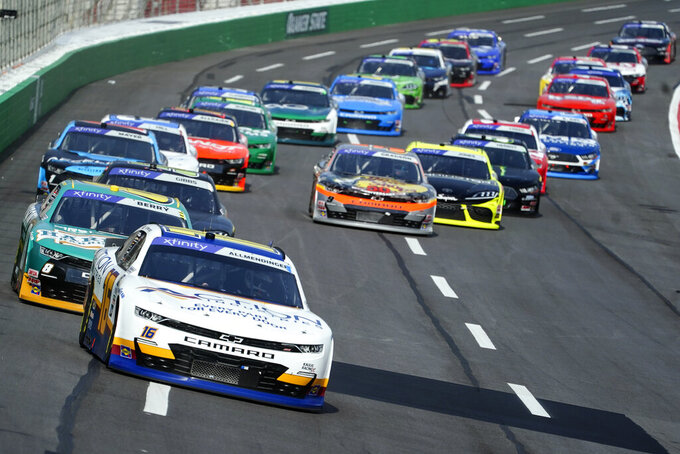 HAMPTON, Ga. (AP) — Georgia native Austin Hill claimed his second NASCAR Xfinity win of the season, leading an eight-car train across the line at Atlanta Motor Speedway to set off a raucous celebration in front of the home folks Saturday.

The 28-year-old Xfinity rookie is from Winston, a small town about an hour's drive from the high-banked track that he considers home.

After a pair of runner-up Truck Series finishes at Atlanta in 2020 and ‘21, and another second-place showing behind Ty Gibbs in the track’s spring Xfinity race, Hill finally crossed the line first at the 1.54-mile trioval.

Morning storms wiped out qualifying and practice, but Hill saw plenty of blue skies when he climbed out his No. 21 Chevy in front of the main grandstand.

“I just won in Atlanta,” said Hill, who also won the season-opening Xfinity race at Daytona. "That's so special. I've been trying to win here for a long time. I've finished second here three times in a row.”

Hill overcame a radio problem that prevented him from communicating with his crew. He changed out helmets just before the green flag, to no avail, so he had to get by with hand signals when he wanted to make adjustments

Hill was trailed by a pack of seven cars — all within a second of the lead — on a frenzied final run. But he never gave up the top spot, pulling away just a bit on the final lap as challengers jockeyed for position behind him.

“It was a rocket ship all day,” Hill said of his car. “I just needed to stay out front and control the runs.”

After Berry won the opening 40-lap stage, Hill signaled his strength by crossing the first at the 80-lap mark — the first stage win of his Xfinity career.

Gibbs came in with a series-high four victories on the season. He started from the pole and was running strong, only to have his day end after 93 laps when a push from Riley Herbst sent him slamming into the outside wall.

The No. 54 Toyota wobbled to the pits with suspension damage, leaving Gibbs with a 35th-place finish that matched his worst of the season.

It was just the second time in 17 races that he's placed outside the top 20.

"It was hard racing and just came home on the wrong side of it,” said Gibbs, toning down the aggressive, outspoken approach that put him at odds with several drivers early in the season.

Nineteen-year-old Sam Mayer, the highest-ranked driver without an Xfinity win, cost himself a shot at victory lane when he foolishly clipped Jeffrey Earnhardt trying to squeeze into a line of cars in the outside lane.

It was the sort of youthful blunder that plagued Mayer a year ago.

“I thought it was going to be good,” he said. “It wasn't. That's my mistake. I've got to calm down and get my act together.”