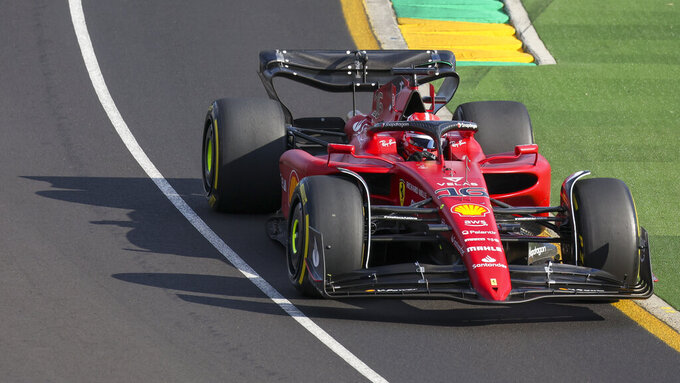 MELBOURNE, Australia (AP) — Riding high after a decisive victory for Ferrari in the Australian Grand Prix on Sunday, Charles Leclerc’s belief in the team's prospects are growing by the race.

A grand prix billed as a showdown between Leclerc’s Ferrari and the Red Bulls of Max Verstappen and Sergio Perez finished with the Monaco driver as a one-sided winner.

The 24-year-old Leclerc extended his lead in the drivers’ championship to 34 points while claiming his second win of the season after victory in the season-opening race in Bahrain.

A crowd of 128,294 in Melbourne were treated to an emphatic triumph by Leclerc, who was able to hold off Verstappen during the opening laps and defended well mid-race under safety car conditions to pull away for a decisive 20.524-second victory.

Engine failure forced Verstappen from the race on lap 38 at the Albert Park circuit, with Perez overcoming a slow start to take second ahead of the Mercedes duo of George Russell and Lewis Hamilton in third and fourth, respectively.

McLaren drivers Lando Norris and Daniel Ricciardo finished fifth and sixth in an Australian GP that drew a record attendance of 419,114 over three days.

The drivers’ championship leader, who pitted on Lap 22, posted a fastest lap of 1 minute, 20.260 seconds with a final-lap flourish and was clearly the quickest car all weekend, which he described as a pleasing surprise.

“Honestly, what a car today. Of course, I did a good job all weekend, but it was not possible without the car,” he said.

His teammate, Carlos Sainz, finished on the podium in Bahrain and Saudi Arabia but endured several setbacks in a testing weekend.

After an issue in qualifying resulted in him starting from ninth, he dropped back further in the field with a slow start and then lost control on the second lap, ending his race.

Nevertheless, Leclerc is bullish on Ferrari's prospects in the manufacturers’ championship this year.

“Obviously, we are only in the third race, so it is difficult to think about the championship,” he said.

“But to be honest, we have a very strong car, a very reliable car too, and for now we have always been there. I hope it continues like this and if it does, we probably have chances for the championship.”

Despite winning in Saudi Arabia a fortnight ago, the Dutchman was clearly disappointed by the performance in Melbourne and said the Red Bull was “already miles behind” Ferrari.

“I don’t even want to think about the championship at the moment,” he said. “I think it is more important just to finish races, because today was, in general, just a bad day again. It is pretty frustrating and unacceptable.

“I knew there was a problem and it was always going to be a question mark for finishing the race, but these kind of things, if you want to fight for the title, cannot happen.”

The Mercedes team has also dealt with issues to start the season and is off the pace behind both Ferrari and Red Bull.

Russell was able to claim his first podium finish of the year when Verstappen was forced from the race and can only hope the team is capable of closing the gap later in the year.

“We got a little bit lucky today … but we will take it. To be standing on the podium is special,” Russell said.

“We are never going to give up. We are going to keep on fighting. We have to keep this up while we are on the back foot, I’m sure we will get there after a few more races.”

Despite disqualification from qualifying for a fuel irregularity, Williams driver Alex Albon finished 10th to secure the team's first point of the season.