Was it worth it? F1 race in Saudi Arabia raises questions 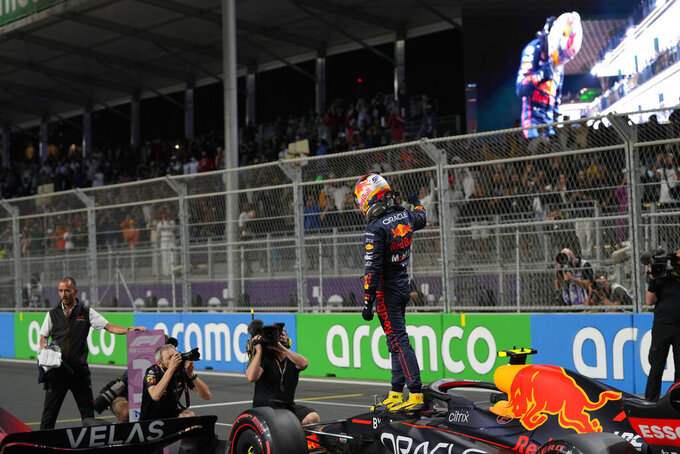 JIDDAH, Saudi Arabia (AP) — When a missile flew into an oil depot close to the track hosting the Saudi Arabian Grand Prix, discussions among Formula One teams and drivers switched from human rights to personal safety.

The big question: Was it safe to remain in Jiddah and compete in the second race of the F1 season after Friday's attack about 11 kilometers (seven miles) away?

Emergency meetings were held long into the night before the decision to race was confirmed at noon on Saturday. World champion Max Verstappen won Sunday's race but he says answers are still needed.

“About the race here, well, we had a lot of guarantees that of course we would be safe,” the Red Bull driver said. “But I think after this weekend all the drivers (will) sit together (and) will speak to F1, and of course team bosses, to see what's happening for the future.”

The attack came two weeks after 81 people were put to death in Saudi Arabia in the kingdom's biggest mass execution. Even when F1 ran its inaugural event at the circuit last December, drivers expressed concerns about human rights.

Questions were asked this weekend whether lucrative deals signed with Bahrain, Qatar and Saudi Arabia — which reportedly pays $55 million per year to host the race — are worth it given everything else that can come with a race; and whether commercial interests take priority in making the final decision to host races.

And it seems like there's a long queue to join F1, which is holding a record 23-race season. The sport's popularity has risen with the Netflix series “Drive to Survive” and was boosted by last year's thrilling duel for the drivers championship between Lewis Hamilton and Verstappen.

“The good news is that Formula One is in a great moment, where a lot of countries would like to host,” F1 chief executive Stefano Domenicali said.

Bahrain, Qatar and Saudi Arabia have been accused of “sports-washing” their human rights records by using high-profile sporting events to project a favorable image of the countries.

A 10-year F1 deal signed with Qatar starts as from 2023 — after the inaugural race last year — and Bahrain's contract was extended until 2036.

Qatar is set to host the soccer World Cup and is under scrutiny over working conditions for migrant workers preparing the Gulf nation for kickoff on Nov. 21.

A familiar refrain is that the presence of high-profile sports events can be a force for change.

“We believe what we’re doing will have a very positive impact in the political situation,” Domenicali said.

F1 terminated its contract with Russia after Russia invaded Ukraine. Four-time F1 champion Sebastian Vettel said he wouldn't have raced there anyway. Other drivers agreed and, during pre-season testing, they wore “No War” messages as they gathered behind a flag of Ukraine.

Saudi Arabia is leading a coalition against the Iran-backed Houthis, who seized Yemen’s capital of Sanaa in September 2014. The kingdom entered the war in Yemen in 2015 and has been internationally criticized for its airstrikes killing civilians.

Overnight airstrikes on Sanaa and Hodeida — both held by the Houthis — followed the attack by rebels on the oil depot in Jiddah.

If F1 should not be going to places that are at war, like Russia, then why go to Saudi Arabia?

“It’s different if one country invades another country, or if something is going on with terrorists," Williams team principal Jost Capito said.

Team principals were asked on the weekend how financial factors influence decisions to stay.

“We shouldn’t shy back or shut ourselves off from these countries because of the criticism that we’re getting," McLaren team principal Andreas Seidl said. "I see the unique chance we have in sport to share this passion for Formula One, to drive this positive change.

“Not just on the economics, for the country here, but also in terms of positive change on the society.”

There has been backlash involving other events in the past, for instance Saudi Arabia came under scrutiny after buying Premier League soccer club Newcastle.

And in 2019, singer Nicki Minaj pulled out of a concert in Saudi Arabia to show support for women’s rights, gay rights and freedom of expression.

High-profile people within F1 are aware of the ongoing questions.

“Does Saudi Arabia and some of the other Middle Eastern countries share the same values, the same culture as we do in Europe? They don’t. Are they where we want them to be? No," Mercedes head of motorsport Toto Wolff said Saturday. “I’d rather come here and make the spotlight shine on the region so it needs to be in a better place, rather than say ‘I’m not going there, I don’t want to hear anything of it.’”

He was asked if it was appropriate racing just miles from an attack.

“For us, is it acceptable to race (near) where there is a drone rocket that is going in a petrol tank? Certainly not,” Wolff said. “But for here, within their culture, these things happen. I don't want to say ‘Well I’m not racing,' because I'm generally someone who wants to give people the chance to better themselves.”