On the road again: Romain Grosjean thriving in IndyCar 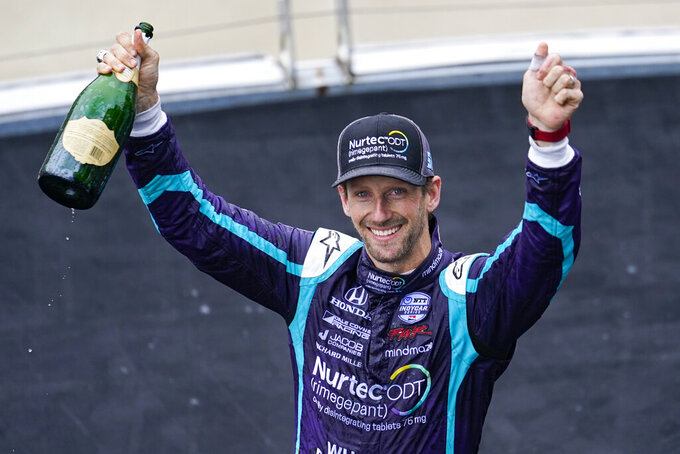 File-This May 15, 2021, file photo shows Romain Grosjean, of Switzerland, celebrating after finishing second in an IndyCar auto race at Indianapolis Motor Speedway in Indianapolis. Grosjean turned in his key to Indianapolis Motor Speedway — yes, he had his own key to the place — packed up his motorhome and headed out Tuesday toward Detroit for his next United States adventure. The man who walked through fire and lived to tell about has fully embraced his move from Formula One to IndyCar, where he won the pole in his third career start then led 44 laps on the road course at Indianapolis before finishing second. (AP Photo/Michael Conroy, File)

Romain Grosjean turned in his key to Indianapolis Motor Speedway — yes, he had his own key to the place — packed up his motorhome and left for Detroit, the next step in his next American adventure.

First, he rode his bike 10 laps around the historic speedway. He had the whole place to himself, after all.

The man who walked through fire and lived to tell about it has fully embraced his move from Formula One to IndyCar, where he won the pole in his third career start with Dale Coyne Racing, then led 44 laps on the road course at Indianapolis before finishing second.

The roar of appreciation from the limited crowd of spectators last month was like nothing the Frenchman had heard before, not even after nine seasons and 10 podiums in F1.

“One of the most beautiful moments that I've ever experienced was I finished second and I did the interview for the crowd and everyone stood up and cheered for me,” Grosjean told The Associated Press on Tuesday as he drove his motorhome to Belle Isle for this weekend's doubleheader.

“I've been on the podium in Formula One but I had never seen so much energy and love coming from the grandstands," he said. "Even my wife, she cried watching at home. She said, ‘Everything you have been doing the last six months, people I guess realize and love that.’ It's a hell of a journey and it's a beautiful journey."

Grosjean was nearly killed in a November F1 race in Bahrain when his car slammed into a barrier, split apart and burst into flames. He was trapped for almost 30 seconds, his family watching on television didn't see him emerge from the ball of fire for nearly three minutes, his hands badly burned, but alive when so many feared the worst.

He's since updated his social media bio to proclaim himself both “fire resistant” and “The Phoenix."

The crash marked the end of his F1 career — he was already losing his seat with Haas — and he's now the latest driver to leave Europe for a move to IndyCar. Like fellow IndyCar rookie Jimmie Johnson, the seven-time NASCAR champion, Grosjean committed only to the road and street course races.

Then he watched the Indianapolis 500 on television in Switzerland with his family and, just like Johnson, has had a change of heart. Grosjean told AP he will race the oval at World Wide Technology Raceway outside St. Louis in August and then make a decision on next year's Indy 500 with his family.

“It is strange to be home watching it and not being part, knowing your friends are doing it,” Grosjean said. “So we'll see what the situation is and then family-wise what do we think of doing. Initially, I said I did not want to do ovals, now I would like to try one and then see if I want to do more.”

Conor Daly took Grosjean to dinner Sunday night in Indianapolis and gave him the phone number for Doug Boles, president of IMS and Daly's stepfather, presumably so Grosjean could return the track key. The two talked about the 500.

“He hates watching,” said Daly. “He’s like, ‘I can’t wait to get back in it.’ He’s embracing it as much as possible, which is really, really cool ... That’s the first time I’ve heard a driver being given the key to the racetrack to just live there."

Grosjean so far has been living in a motorhome that he's taken to his first three IndyCar races and parked in the IMS infield, which gave him access to all of its amenities, including a clear track for his Tuesday morning bike ride.

“It's great, you have all the room you want, there's no traffic so you don't have to worry about people hitting you and I also just wanted to do it for the experience," Grosjean said.

He will drive the motorhome from Detroit to Road America in Wisconsin and then Mid-Ohio, and his wife and three children will at last join him in the U.S. on July 4 for a monthlong tour of America in the bus. Then his kids will see their dad race in his first IndyCar event in August at Nashville.

Grosjean saved every hat he was given for the podium photographs to bring home to his children from the Indianapolis runner-up finish for them to pick.

“They were very happy with that, and they were genuinely happy to see Daddy on the podium,” Grosjean said. “Even though my two sons were born when I was on my last podium, one was 2 years old and one was three months, and they have no memory of it and they call me every day and can't wait to come.”

Grosjean has said that 2013 was the last time he enjoyed going to the race track as much as he does now. Part of that is because he wasn't in competitive cars in F1 and knew he never had a chance to win races.

But his crash in Bahrain has given him a new perspective on life and his passion for racing has returned in a new country with a new series. He needs another skin graft on his left hand that he anticipates will happen in October and thinks he would be healed in time to compete in January in the Rolex 24 at Daytona because Grosjean now wants to add IMSA's three endurance sports car races to his schedule.

He was stopped 10 times in downtown Chicago by fans asking for selfies, he said, and he could not be more pleased with his decision to move to IndyCar.

“When you are passionate about something and it is like a fire, and maybe that fire has been shaken down through the last few years, but when you get a pole and you are leading a race again, it's like, ‘Hell yeah,’” he said. “It's hard to do, but when you do it you want to do it again.”