Pressure is on Bottas to impress Mercedes at Hungarian GP 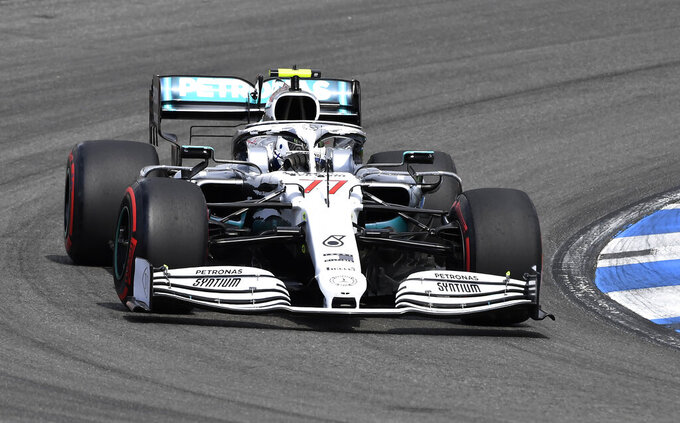 FILE - In this file photo dated Saturday, July 27, 2019, Mercedes driver Valtteri Bottas of Finland steers his car during the qualifying Formula One session at the Hockenheimring racetrack in Hockenheim, Germany. Mercedes has a point to prove at upcoming weekend’s Hungarian Grand Prix, especially Valtteri Bottas after his crash at the German GP. (AP Photo/Jens Meyer, FILE)

His future at Mercedes will be settled during Formula One's summer break, which follows Sunday's race. Last weekend's crash at the German GP has only increased the spotlight on the Finnish driver heading into the race.

"For sure it was not ideal," Bottas said Thursday, reflecting on his Hockenheim crash. "Every race is important but when you know the team is making decision for the future ... it can be very important."

Bottas has been on one-year rolling contracts since joining Mercedes in 2017 as a sudden replacement for retired world champion Nico Rosberg. Last year he got the nod for 2019 only in July. This time the decision is being made even later, amid speculation he could be replaced by Red Bull's Max Verstappen.

While he is mindful of the situation, he said the uncertainty will not affect his driving at the Hungaroring.

"It's not the first time ... so it's business as usual," Bottas said. "I feel I deserve to be here. I still have lots to give, lots to get. I still haven't achieved my goals."

His stated goal at the start of this season was to challenge — and topple — reigning world champion Lewis Hamilton, his Mercedes teammate.

Bottas backed that up by winning two of the first four races and even leading the F1 championship ahead of Hamilton. But he has not won any of the past seven, while Hamilton has won five.

It was a golden chance missed for Bottas last weekend, given that Hamilton collected only two points after finishing ninth.

At the time of his crash, which came two laps after Hamilton had spun his car in the same place, Bottas was pushing for a podium finish, which would have at least dented Hamilton's championship lead. Instead, Bottas sits 41 points behind the five-time F1 champion.

"I still believe in myself as hard as I did. I know I'm still in the championship fight. Maybe some people don't," Bottas said at the Mercedes motorhome. "I can't say that anything has changed in my driving. I am driving as well as I can. The first few races I had the wind on my side, then Lewis got it."

Bottas and Hamilton lead F1 drivers with four pole positions each this season, proof Bottas has the single-lap speed. But Bottas concedes that he still lacks a certain level of consistency.

"It all comes down to me being at my best level every week. That's the tricky part," he said. "To get the maximum out of yourself in every single session."

Hamilton and Verstappen, who turns 22 next month, seem to have that in abundance.

Verstappen won last weekend's chaotic and rain-soaked race, showing great composure on a treacherously wet track. It was his second win in three races and the seventh of his career.

"He's done a great job and clearly they (Red Bull) have done a great job in quite a few races now," Hamilton said of Verstappen and his Red Bull team. "It's great to see them progressing. We'll be ready for the fight."

Hamilton is 63 points ahead of Verstappen, who is third in the title race with 10 races remaining. A title shot seems too far off for Verstappen this season, given Hamilton is unlikely to have too many blips like Hockenheim, if any at all.

But an inter-team title fight at Mercedes, if Verstappen does replace Bottas next year, would be a mouthwatering one that F1 is desperate to see.

"Personally I would have no problem with it," Hamilton said. "I don't know how that dynamic would work for the team. I'm not saying it would or it would not."

A rivalry with Verstappen would — hypothetically — also give Hamilton a chance to prove he's the quicker driver rather than being in a faster and more reliable car.

"In some ways it works well for me ... because people write stories (saying) we've got different cars (and) that's the only way I'm quicker," Hamilton said. "So this gives me the opportunity to show that's not the case."