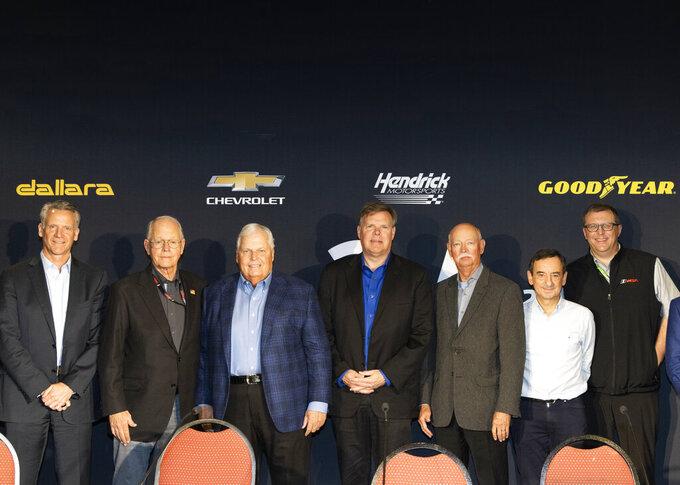 SEBRING, Fla. (AP) — NASCAR and Hendrick Motorsports have partnered on an effort to enter the 24 Hours of Le Mans next year with a modified version of its new Next Gen car.

The collaborative effort announced Thursday at Sebring International Raceway seeks the “Garage 56” entry, which was created in 2012 as a special single-entry class reserved for innovative cars. The Garage 56 entry allows for the testing of new technologies, creativity and innovation without claiming a spot on the traditional starting grid.

“We’re not taking this lightly. This is a full bore, full blown effort to run 24 hours and to run competitive times,” said Rick Hendrick, the winningest team owner in NASCAR history. “We’re not going over there to ride around. We’re going to put the best effort out there and run very competitively and finish the race. That’s a tall order. I feel strongly that we can do it.”

NASCAR still needs an invitation from l’Automobile Club de l’Ouest, the organizer of the 24 Hours of Le Mans, but it seemed a formality based on the magnitude of the announcement Thursday. Pierre Fillon, president of ACO, participated in the event alongside Jim France, chairman of both NASCAR and IMSA.

“Garage 56 is a car dedicated to innovation. We need something innovative. When Jim told me there will be a new generation of cars in NASCAR, with using a hybrid system, he had this crazy idea to enter this car as a Garage 56 in 2023, I was immediately enthusiastic,” Fillon said. "I think this new generation of NASCAR with the hybrid system is innovative. This is the future of NASCAR. This car will bring some wonderful memories to the fans.

“We have to convince the Selection Committee in 2023, but I’m sure with a high-level team behind this project, you will take on this challenge. I’m very confident.”

NASCAR last participated at Le Mans, the most prestigious sports car race in the world, in 1976 when series founder Bill France cut a deal to bring two cars to the endurance race in the newly-created Grand International class. Hershel McGriff both owned and drove the Dodge Charger that entered the race, while Junie Donlavey sent a Ford Torino driven by Richard Brooks and Dick Hutcherson.

The 2023 entry will be a modified version of the Next Gen Chevrolet Camaro ZL1 race car. NASCAR, Hendrick Motorsports, Chevrolet, IMSA, and Goodyear all worked on the project, with technical elements of the car and the team’s driver lineup expected at a later date. The Next Gen debuted this season as NASCAR’s newest Cup car.

The panel assembled for Thursday's announcement couldn't discuss possible driver lineups — a team is required to have at least three drivers and no more than four — or if current NASCAR drivers will be able to compete. France turned to NASCAR president Steve Phelps, who oversees the creation of the annual schedule, to inquire about an open week on the Cup schedule that would free some drivers to travel to France for the event.

“I think it would be nice to have a mix. We’ve talked about it a lot, if the calendar works out, we’ll just wait and see what’s available,” said Hendrick. “But we’ve got from the IMSA drivers a lot of drivers that have Le Mans experience. Especially with Chevrolet’s involvement, we’ll be covered with drivers. But we would like to see a Cup driver in the system if we could.”

Hendrick then joked he'd like to use four-time NASCAR champion Jeff Gordon, who is retired now and the vice chairman of Hendrick Motorsports. Gordon turns 51 in August. He also said he'd be willing to use seven-time NASCAR champion Jimmie Johnson, who put together the IMSA endurance team Hendrick has run since last season.

“We’re going to put Gordon on a diet and get him in there,” Hendrick said. “I haven’t talked to Jimmie yet. I’m sure he would do it if he doesn't have a conflict.”

France, who succeeded his father, brother and finally nephew before taking on NASCAR's top job, said bringing the Next Gen to Le Mans was a tribute to his late father and older brother, who like him were huge fans of sports car racing.

“I think the best way to describe this is I’m doing it probably as my father was and my brother — as a racer,” said France. "It’s a tremendous opportunity for the sport that my dad started to further its reach with other fans, new fans. I’m also very much into the sports car racing and road racing, as dad was.

“There’s no way that I can honor my dad. He was so much farther ahead than what I am. But to try and carry on some of his legacy and continue what he and my mom started, it’s our family business, and we’re looking forward to continuing to grow it.”

France in 2020 was part of an announcement between IMSA and the ACO on new technical regulations for the top prototype category that makes IMSA's top class eligible to compete at Le Mans in 2023.