Leclerc not feeling the pressure ahead of Ferrari move 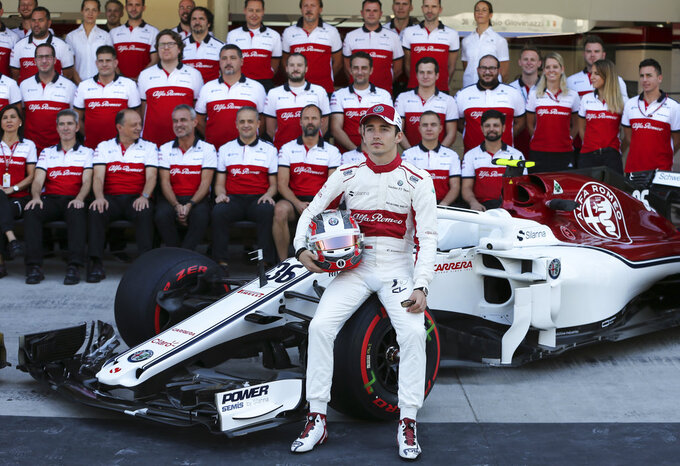 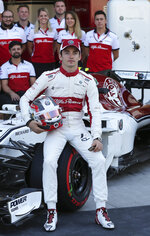 ABU DHABI, United Arab Emirates (AP) — Pressure does not seem to affect Charles Leclerc, which is just as well given where his career is taking him.

The 21-year-old driver from Monaco has earned a prestigious move to Ferrari following strong performances for unheralded Sauber in his debut Formula One season.

Leclerc will race alongside four-time world champion Sebastian Vettel in 2019 at Ferrari. Vettel has 52 wins and 111 podiums, but Leclerc is expected to be free to compete evenly against the German driver.

Along with Red Bull's Max Verstappen — who is the same age — Leclerc is tipped to follow Lewis Hamilton and Vettel as F1's next stars.

Leclerc won last year's F2 championship at the first attempt, fast-tracking him into F1 and casting him into the spotlight. But by his own admission, he made errors as he forced the car too much on track, finishing 13th, 12th and 19th in his first three races.

"I remember when I made mistakes three weekends in a row it seemed like an eternity," Leclerc told The Associated Press on the Sauber motorhome rooftop at the Abu Dhabi Grand Prix. "From the outside it didn't go unnoticed either and people were asking questions of me."

Asked if he is affected by any questioning of him, Leclerc replied firmly.

A veneer of confidence can be quickly exposed in the hard-nosed world of elite competition. But Leclerc speaks without a hint of arrogance and in precise sentences woven around an immense inner belief. One of Leclerc's strengths, and a key reason why Ferrari rates him highly, is a capacity for self-appraisal. Leclerc did not hide from his errors but embraced them and worked through them.

"I don't have many regrets because, even in the weekends things went badly, that's when I learnt the most," he told the AP. "They helped me become the driver I am now. I learned the mistakes you shouldn't make in Formula One."

Leclerc has already experienced a lot of emotional turmoil — losing his father and his close friend Jules Bianchi — and those setbacks forged a remarkably strong mental strength.

Last year in F2, Leclerc took pole position and won in Baku, Azerbaijan, shortly after the death of his father. That was only two years after losing his childhood friend Bianchi, the highly rated French driver who died in July 2015 at the age of 25 from head injuries sustained in a collision during the 2014 Japanese GP.

"It's obvious I wasn't in a comfortable position because people were expecting big things from me straight away in my first races," he said. "I knew in my head this wasn't realistic because Formula 1 really is very different from Formula 2. After that things clicked."

Leclerc bounced back with an impressive sixth place at the next race in Baku and then secured top-10 finishes in four of the next five.

He underlined his consistency in one of the weaker cars on the grid — Sauber finished eighth out of 10 teams in the constructors' championship — by finishing in the points in 10 of 21 races.

Leclerc was voted driver of the race after finishing seventh at the Russian GP, and qualified in in eighth place at the French GP and the Brazilian GP.

"There were key moments in the year, because we hadn't expected to be so competitive," said Leclerc, who finished seventh in his final race for Sauber on Sunday and 13th overall in the championship. Veteran Kimi Raikkonen is leaving Ferrari to replace Leclerc at Sauber.

Leclerc first tested his driving skills at age 3 ½ on a karting track owned by Bianchi's father, a friend of Leclerc's father. Early promise quickly materialized when Leclerc won the 2009 French championship and then he later took on Verstappen, Pierre Gasly and Esteban Ocon in karting.

All are now promising F1 drivers and could again become Leclerc's rivals in coming years.

Before that, Leclerc begins testing with Ferrari next week.