Hamlin vows to get even with Chastain after Gateway wreck 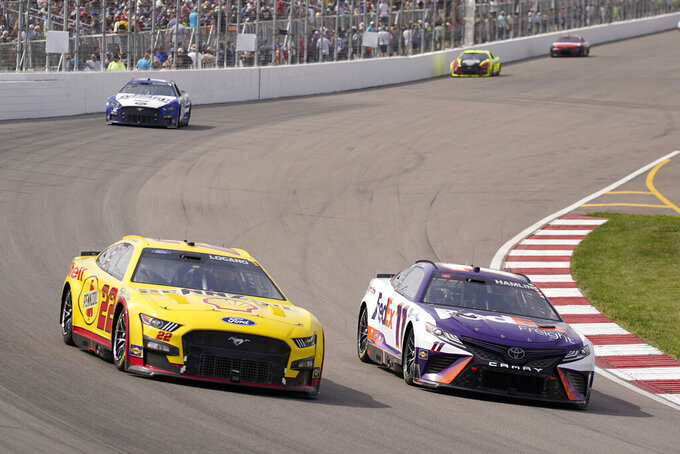 MADISON, Ill. (AP) — Denny Hamlin posted a clip on Twitter late Sunday that essentially mashed up his beef with Ross Chastain from earlier in the day with a scene from “Days of Thunder,” when Tom Cruise's character tells his team to change his tires after a race had ended so that he could head back out and wreck his foil.

Chastain eventually ran too hard into the tight first turn, made contact with the No. 11 and sent him into the wall.

Hamlin spent the rest of the afternoon trying to exact some revenge. At one point, he nearly drove Chastain into the grass along the backstretch while they were running side by side. At another, Hamlin slowed to a crawl with the No. 1 car behind him, nearly preventing both of them from making the minimum speed to remain on the track.

“It's completely unacceptable that I did that,” Chastain said of the wreck afterward, offering a mea culpa that fell on a lot of deaf ears in the garage area.

“I was just way off on my driving. Running into people is not acceptable at his level. I cannot believe, standing here right now, that I just made so many mistakes, back to back.”

Chastain also briefly touched bumpers with Joey Logano, who went on to outduel Kyle Busch in overtime for the win, and Chase Elliott, who was just about as forgiving as Hamlin when the two saw each other again.

Elliott nearly nudged Chastain into the wall before Hamlin, right behind them, took another swipe at the No. 1.

“He wasn't shy after our contact,” Hamlin said. “It seemed like there's no sense of consciousness there that says, ‘Maybe I’m going a bit aggressive.' That's his decision to make. He can make any decision he wants to. He's his own guy.

“He's been very successful doing what he's doing,” Hamlin continued, "but ultimately the sport is self-policing. When you least expect it and when it means the most is when it comes around.”

That could mean this weekend at Sonoma, where the road course offers plenty of turns and ample opportunities to ruin a day. Or if Hamlin wants to send a message “when it means the most,” it could come during the playoffs — Chastain's in with two wins this season, and Hamlin clinched his spot by winning the Coca-Cola 600 at Charlotte.

On-track policing has always been a part of NASCAR, from its door-banging early days racing on a beach in Daytona, Florida, through the 1980s and ’90s, when just about everyone could count on Dale Earnhardt to keep everyone in line.

“It’s good he takes responsibility," Hamlin said of Chastain, "but ultimately it ruined our day.”

Ruined his night, too. Hamlin spent hours afterward in a Twitter back-and-forth with Trackhouse Racing's Justin Marks, the owner of Chastain's car, who replied to Hamlin's comment about fencing his driver with: “Can't wait.”

“You're not helping JM,” Hamlin tweeted in reply, before adding: “I mean you can keep stoking if you'd like.”

Sounds like the start of a feud between two of the sport's progressive young owners — Hamlin drives for Joe Gibbs Racing but also owns 23XI Racing along with Michael Jordan, and fields cars for Kurt Busch and Bubba Wallace.

Incidentally, it was Hamlin-the-owner who did some more enforcing Sunday on Ricky Stenhouse Jr., who got into the rear of Wallace and sent him for a ride.

“We all have learned the hard way," Hamlin said. "We’ve all had it come back around on us.”

As for Chastain, his relentless approach on the track is in some ways a byproduct of his upbringing in the sport, fighting for every opportunity along the way. He once drove a team's motorhome to the track to earn a little extra cash, and he's seen a multitude of opportunities go by the wayside because of factors far outside his own control.

“Ross has spent a number of years in his career fighting every lap of every race because tomorrow wasn’t given, because next week was not guaranteed,” Marks said recently. “I’ve seen and continue to see so much talent in him that my goal was to put him in a position where he didn’t have to do that, where he had some job security.”

In other words, Marks will always be quick to defend his driver, whether it be on social media or in the garage, but he also wouldn't mind if Chastain calmed down a bit once he puts the window net up.

That's something Chastain vowed to do once more after a wreck-filled race outside of St. Louis.

“I owe half of the field an apology," he said. "Words aren’t going to fix it, so I’ll have to pay for it on the track. I almost did today and I deserve everything they do. I can’t believe I continued to make those same mistakes; overdrive the corners and drive into guys. I had time under caution to get reset and we’d go green and I would drive into somebody. Terrible.”