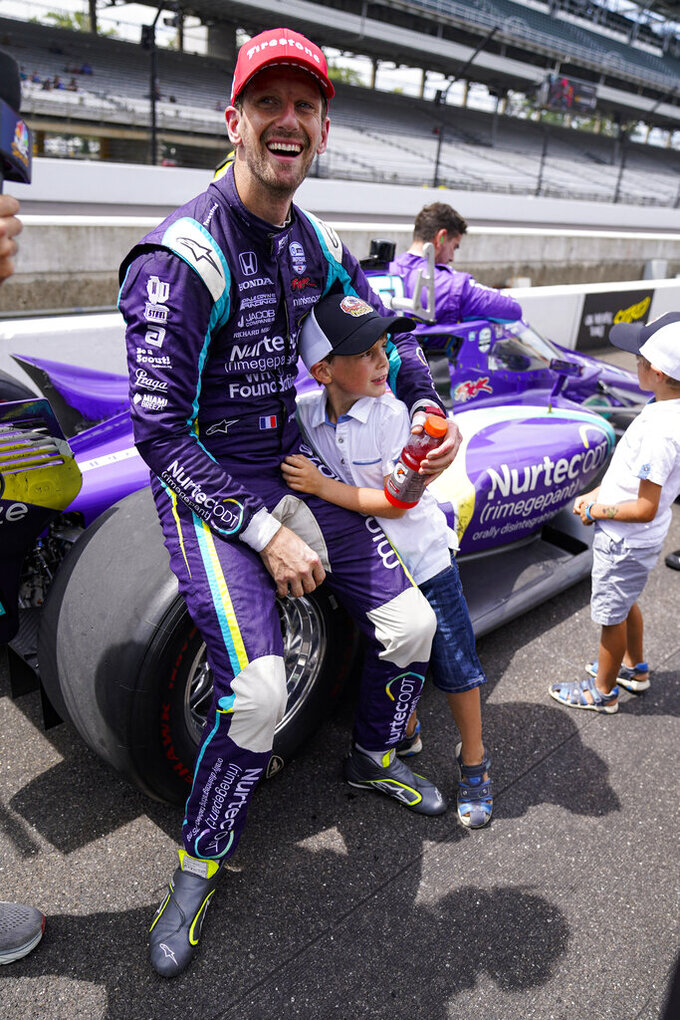 Romain Grosjean had modest goals for his first career race on an oval — finish all the laps, find a feel for this new style of racing and have a good time in his latest new adventure.

When he pumped his fist in the air as he brought his car back to his crew following qualifying at World Wide Technology Raceway, it was clear Grosjean was quickly getting the hang of all the left turns.

The former Formula One driver who moved to IndyCar this season with no intention of racing on any ovals successfully completed his first attempt with a clean 14th-place finish Saturday night outside St. Louis. The Frenchman hardly appeared to be a novice as he wheeled around the short track, picking off five cars over eight laps to drive his way up to ninth about a third of the way into the race.

Grosjean worked for more than two laps to get past former Indianapolis 500 winner Tony Kanaan, the most experienced driver at Gateway in Saturday night's field, grabbing the position after a drag race down the backstretch. His confidence was clearly high a lap later as he dove inside Dalton Kellett and completed the pass, even as Kellett squeezed Grosjean to the bottom in what appeared to be brief wheel-to-wheel contact.

He next shrugged off a big block by Conor Daly and passed Daly on the outside, then used an inside pass of Jack Harvey to crack the top-10, followed by a surge past fellow rookie of the year contender Scott McLaughlin.

The only downer of the entire day was his final finishing position because strategy and a slight struggle put him a lap down and unable to grab anything higher than 14th, the same spot he started.

“Obviously a bit disappointed with 14th at the end, especially as we had pace and got some good moves out there,” Grosjean said after the race.

But he was credited with the fourth-fastest lap of the race, learned some of the nuances of driving around in circles and figured out he really could do something completely new to him at 35 years old.

“Car went well, I learned a lot about it, and obviously, it’s all about the confidence,” Grosjean said. "But at the end, I wish we would have finished a little bit better.”

If Grosjean had not admitted to his difficulties on cold tires, it would have been hard to tell he had any problems Saturday, which consisted of a practice, qualifying session and finally the race. He'd come to IndyCar after walking out of a fireball in an F1 crash last November in Bahrain, a traumatizing experience that made sticking to road and street courses the smart and sensible play.

But when Grosjean returned to Switzerland after his podium finish on the Indianapolis road course in May and watched the Indy 500 on television, he found himself wishing he was out on the track. He told Dale Coyne Racing he'd like to test on an oval to see if he liked it, and a smooth session last month at Gateway made his decision official.

“The racing is all about thinking ahead, which I do quite like,” he said of running on an oval. “I’m still at that point where I go into a corner, and I don’t know if I’m going to come out of it or not, so you can tell I’m still in my early days.”

He wasn't ready to commit to another oval after Saturday night's race — “woah, wait a minute, wait a minute butterfly. Give me a night," he said — but it's more than likely Grosjean will be back in IndyCar next season running the full schedule. This year has been magical for Grosjean personally and professionally in that he's enjoying his job for the first time in nearly a decade while creating memories with his wife and three children.

Grosjean never brought his children to the track when he raced in F1 and his oldest wasn't even born when he won his last race. So Grosjean took advantage of IndyCar's monthlong break through July when wife, Marion, brought Sacha (8), Simon (6) and Camille (3) to the United States for a tour of the country in the motorhome he calls “Raul.”

“We were very lucky and very grateful we got to do that together,” he said. “Some days, I wanted to kill my kids, living in a bus the five of us. It wasn’t always great, but generally, as a life experience for all of us, it was one of the best things."

And his kids got to see Daddy race for the first time. They went to the street course in Nashville and then back to Indy's road course, where Grosjean finished second for his second podium of the season. Unlike his first runner-up finish in May, his kids were at the stage to see the celebratory champagne spray.

“The two boys, they’re very interested in racing and learning about it, and my engineers, they’re the best babysitters you can have. They’ve loved explaining it all to the boys," Grosjean said.

The races made such an impact on the boys that when Grosjean took them to New York City for a final few days before they returned to Switzerland, Grosjean found himself answering so many questions the trip no longer felt like a vacation.