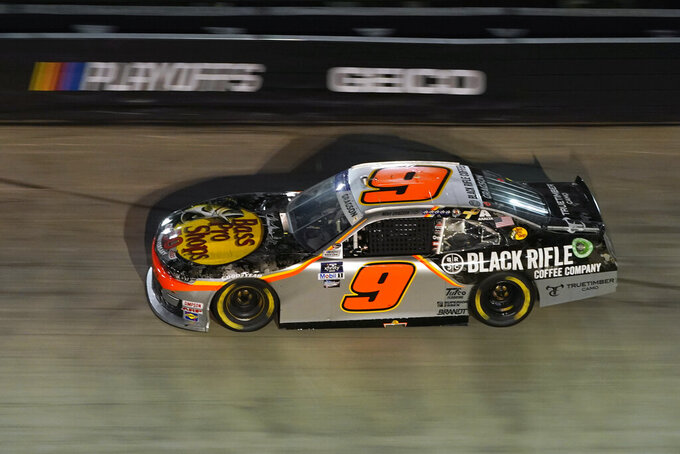 Gragson won his series-high sixth race of the season driving a Chevrolet for JR Motorsports. He was aided when teammate Justin Allgaier was flagged for speeding during the final pit stops under caution; Gragson did not pit and restarted the race in the lead.

Gragson and his JRM crew climbed the Bristol fence in celebration, then a breathless Gragson sat on the wall to collect himself.

“Man, three in a row. I appreciate Brandon Jones racing us clean,” Gragson said, noting he won at Bristol in 2020 during the pandemic in front of a limited crowd.

“What a great opportunity to race here in front of fans. I had a blast.”

The Xfinity Series playoffs begin next week at Texas Motor Speedway and Gragson is the top seed.

Jones, who is replacing Gragson next year in the No. 9 when Gragson moves to a Cup ride, had several good looks at passing Gragson for the win. Jones never tried to move him and settled for second in his Toyota for Joe Gibbs Racing.

Austin Hill was third in a Chevrolet for Richard Childress Racing and was followed by Sam Mayer and then Riley Herbst in fifth as the highest-finishing Ford driver.

Ryan Sieg claimed the last spot in the Xfinity Series playoff field when Landon Cassill had mechanical issues that sent Cassill behind the wall for more than 100 laps.

Cassill got back on track but finished 35th. Sieg was 10th to edge Cassill for the final playoff berth by five points.

Gragson earlier in the race took out a pair of contenders when he hit the back of Ty Gibbs as Gibbs was racing side-by-side with leader Sheldon Creed. The contact turned Gibbs hard into Creed and both cars crashed.

It eliminated Creed from the playoff field and cost Gibbs the regular-season championship.

“It's been my year all year, I'm right in the middle of everyone's mess,” Creed said. “I don't know where Noah was going to go, you know?”