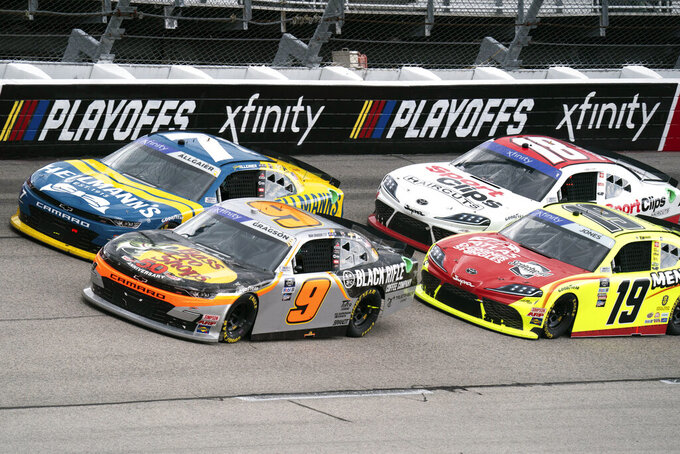 Gragson, tracking leader Creed, looked like his chance at victory might've slipped away when NASCAR Cup Series champion Kyle Larson took over second. But as Larson and Creed fought side-by-side, touching several times in the final laps, Gragson moved low around both of them as Creed's car had a flat tire and gave off sparks against the wall.

Gragson and his team climbed the fence in celebration of his fourth win this season — and the fourth straight Darlington Xfinity win for owner JR Motorsports.

“We won this race here last year and we put on one hell of a show for the fans,” Gragson said.

Gragson, known for getting sick in his car, did it again after his burnout as he was overwhelmed by the fumes.

When Larson got past Gragson with three to go, Gragson thought things would unfold as they did with Creed and Larson bumping-and-grinding enough to give him a chance.

“He watched them race it out and it led to some good fortune,” said Gragson's owner, Dale Earnhardt Jr.

The race was red-flagged for 2 hours, 37 minutes after rain hit the track. It ended under the lights.

Larson warmed up for this year's playoff opener Sunday by running the Xfinity event. Larson got up to third near the end of the opening, 45-lap stage. After hitting wall earlier, Larson apparently ran over debris to flatten his tire and drop a lap down to 35th.

Still, he moved in contention at the end, but just couldn't clear Creed.

“It was just a lot of fun from all of our seats,” said Larson, who starts defense of his Cup Series title in Sunday's Southern 500 here. “It was crazy to be part of a finish like that.”

Creed was racing for his first Xfinity win that would put in the playoffs with only two regular-season races remaining.

Creed hoped Larson and Gragson would get caught up racing each other and give him some breathing room.

“Gosh, I was just trying to hold on,” said Creed, a former truck series champion. “I had a really fast car, but was a little too free there to run their speed at the end."

How difficult is Darlington?

Ty Gibbs and Justin Allgaier bumped each other on a pace lap while heating up their tires for the start.

Then after stage one, Anthony Alfredo and John Hunter Nemechek wrecked in the caution period. Alfredo had significant damage and lost several laps as his crew tried to get him back out. During the lengthy rain delay, Alfredo said he got sick in the car and apologized to Nemechek.

Denny Hamlin, second all-time at Darlington with five Xfinity wins, was scheduled to race here. But chose to rest with lingering soreness from the wreck he was in at Daytona last week. Another playoff team of Hamlin's, Christopher Bell, took the Xfinity seat and finished seventh.