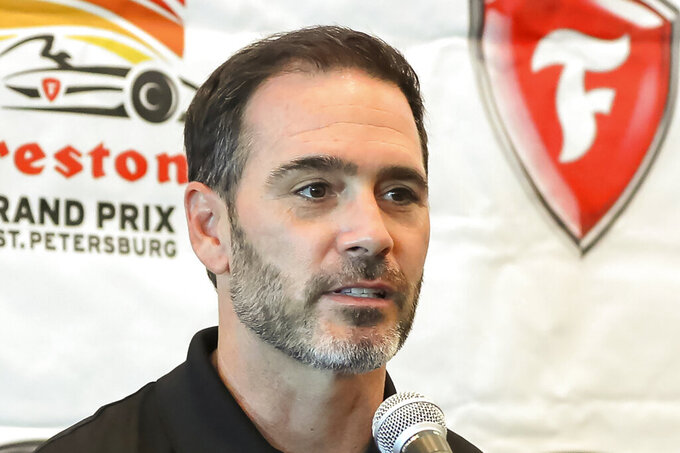 FILE - Jimmie Johnson speaks about joining the team of Chip Ganassi for the IndyCar series at a press conference during the IndyCar race weekend in St. Petersburg, Fla., in this Saturday, Oct. 24, 2020, file photo. The Seven-time NASCAR champion is retiring from full-time racing and will turn his focus toward spending time with family. He figures his future schedule will include no more than 10 bucket list events and has his sights set on the 24 Hours of Le Mans. (AP Photo/Mike Carlson, File)

CHARLOTTE, N.C. (AP) — There is a scene in Jimmie Johnson's coffee table book “One More Lap” in which the seven-time NASCAR champion and future Hall of Famer gives a dramatic reading of an excerpt from a biography of the late journalist Hunter S. Thompson.

The author, Robert Sullivan, notes that Johnson finishes reading aloud the wild exploits of Thompson “half freaked out and half amazed by the strange but committed (Thompson) discipline. Nothing commands Johnson's respect like dedication and discipline.”

Indeed, there was no stopping Johnson on his long climb from El Cajon, California, to the top of NASCAR.

He grew up a diehard Rick Mears fan and dreamed of racing in the Indianapolis 500, but Johnson's path in the mid-1990s took him from off-road racing across the country to North Carolina and the NASCAR explosion in mainstream popularity. He couch-surfed, made connections and put together whatever deals he could. In 2001, he drummed up the confidence to approach Jeff Gordon in a driver meeting and ask for some career advice.

It was a life-changing move for Johnson, who became Gordon's choice to fill the seat in the new No. 48 Chevrolet that was being created in a Hendrick Motorsports expansion. Johnson went on to dethrone his mentor: Johnson's seven Cup Series titles are tied with Hall of Famers Richard Petty and the late Dale Earnhardt, his 83 career victories are sixth-most all time and his five consecutive titles from 2006 to 2010 is a record that will likely never be challenged. He the only NASCAR driver in history to be voted The Associated Press Male Athlete of the Year.

Johnson left his NASCAR career after two decades at the end of the 2020 season and spent the last two years racing IndyCar and IMSA sports cars. He made his Indianapolis 500 debut this May as a 46-year-old rookie and checked item after item off his bucket list.

Johnson finally said he has had enough. The time he wants to devote to his wife and two daughters has been selfishly hogged by his long racing career, and Johnson said he will step back from full-time racing and run no more than 10 “bucket list” events in 2023.

In an interview with The Associated Press during last week's Presidents Cup golf event, Johnson was amazed at his inside-the-ropes access at Quail Hollow. He came from a blue-collar home where his dad, Gary, drove a truck for B.F. Goodrich, his mom, Cathy, drove a school bus and the family weekend activity was taking their bikes into the desert to race.

“I think about where I came from all the time, and I think now that I'm in a much more reflective place in life with age and where I am in my career, I can't believe it all happened,” Johnson told AP. "It's just so crazy. I obviously have a great appreciation now of how hard it is to win races, and making the change to IndyCar later in my career was eye-opening.

“But I look back and, you know, there were times where we were just expected to win races, championships, whatever it was. My team was expected to win. It's crazy to think that I live that life. It just seems so surreal.”

Johnson was the most dominant NASCAR driver of his generation, piling up the trophies as critics incorrectly concluded he was bland, even boring after the likes of Earnhardt and Petty.

Not only is Johnson a thrill-seeker, he loves a good party. In 2006, he fell off the top of a golf cart while celebrating his first Cup title and broke his left wrist; he wasn't forthcoming with Hendrick Motorsports about that, but was eventually found out.

From that moment forward, Johnson has been the consummate professional and a role model worth anyone's admiration.His 14th annual Jimmie Johnson Foundation Golf Tournament last October pushed his foundation to more than $9 million that Jimmie and Chani Johnson have donated to schools in California, North Carolina and Oklahoma.

Johnson has also previously partnered with Habitat for Humanity, the Make-A-Wish Foundation and created the Jimmie Johnson Foundation Fit Fest, a community event designed to encourage outdoor activities for children.

Fitness became Johnson's obsession and it would surprise no one if, even at 47, he suddenly takes up competitive mountain bike racing or trains for an Iron Man triathlon. He's not sure what motorsports events he will enter in 2023, but has no regrets about two seasons in IndyCar in which he excelled on ovals but struggled mightily on road and street courses.

There was heated debate when Johnson beat 20-year-old David Malukas for Indy 500 top rookie honors; Malukas had finished higher than Johnson, who crashed late, but Johnson did tireless promotional work for the race and dazzled with 240 mph-plus laps in qualifying. Johnson was also criticized publicly several times by two-time champion Josef Newgarden for being in the way.

Johnson said was he was “without a doubt” at peace with his IndyCar adventure.

“I came into this for the experience. And my goal was to try to race in the mid-pack on the road and street courses, and to be in the top-five on ovals, and I was able to accomplish that,” Johnson told AP. “So from a balls and strikes category, I hit my objective. But from an experience, it far exceeded what I hoped it would be. The car, the people, the Indy 500, sure it all came with challenges, but that's life, as we all know.”

And now comes the next phase, which could include a move abroad for his family as Johnson tries to find the events that will fill his competitive drive. Next up is the IMSA season-finale Petit Le Mans at Road Atlanta, which will be Johnson's final sports car race in the program he put together with Hendrick Motorsports.

But first he'll squeeze in some of the glitz and glamour that comes with being “7-Time” while also married to a woman who has established herself in the art world. Chani Johnson is a curator and art gallery owner, and the celebrity friends they've attracted over the years spans multiple genres of pop culture.

On Wednesday night in New York, Johnson will celebrate that new, 272-page book at a party at the Ralph Lauren Flagship store hosted by actor Nacho Figueras and his wife, Delfina Blaquier. The book includes 175 photographs the Johnsons commissioned from various high-profile photographers over his racing career and curated by Ivan Shaw, the former photography director of Vogue and now with Conde Nast.

The forward is written by Michael Jordan, who knows a thing or two about elite athletes.

“Jimmie caught my attention with his drive, leadership and mental toughness,” Jordan wrote. “But to become a seven-time champion in your sport AND to win five titles in a row requires something extra — an intense passion for winning, and Jimmie's got it. He and I have talked on several occasions about what it takes to not only be a champion in your sport, but to be a repeat champion. Obviously, it's not something that comes easy, but it sure feels good.”