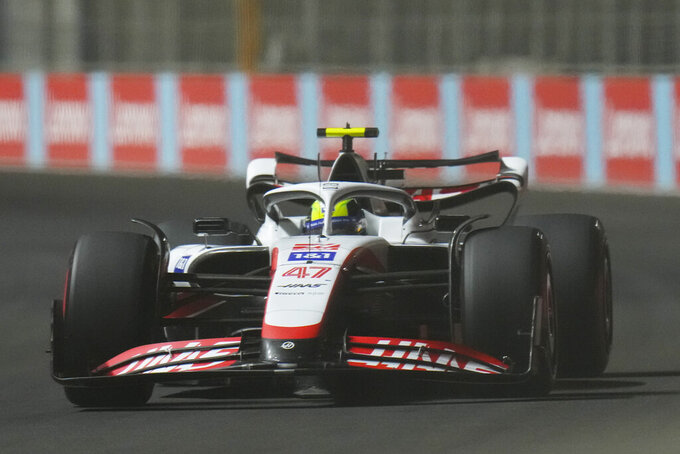 JIDDAH, Saudi Arabia (AP) — Mick Schumacher will not compete in the Saudi Arabian Grand Prix following his hard crash in Formula One qualifying.

Schumacher crashed Saturday and was airlifted to a hospital for further examination before returning to his hotel. Haas F1 ruled Schumacher out of the race Sunday and the American team said it would field just one car.

Schumacher, who turned 23 earlier this week, posted on social media that he was “OK.”

Schumacher is the son of seven-time F1 champion Michael Schumacher, and the Haas team said the young driver was able to phone his mother following the crash. It took safety workers several minutes to get Schumacher from his mangled car and into an ambulance for a first cursory check at the track.

F1 has been heavily scrutinized for continuing its race weekend following an attack by rebels on a nearby oil depot. The attack during the first practice Friday could be heard at the track and smoke could be seen billowing in the background of the circuit.

Drivers met several times on Friday for more than four hours discussing safety concerns and whether or not they should compete. F1 and the FIA, the ruling body for the series, assured the competitors that safety measures were in place.

So the action went on as scheduled Saturday until Schumacher's crash in the second segment of qualifying. It created a lengthy stoppage for cleanup and pole-sitter Sergio Perez of Red Bull said after the Saudi Arabian circuit is “definitely the most dangerous place in the calendar. That’s no secret about it.”

Sunday will mark the second time in three F1 races that Haas has been down to just one car. Nikita Mazepin missed the season finale last year when he tested positive for COVID-19 the morning of the race. Mazepin has been replaced this year by Kevin Magnussen, who will start 10th on Sunday.

Haas reserve driver Pietro Fittipaldi is in Saudi Arabia but, just as was the case in Abu Dhabi last December when Mazepin was ruled out, he was not eligible to get in the car so late in the race weekend.