NASCAR will be watched closely when it returns to racing 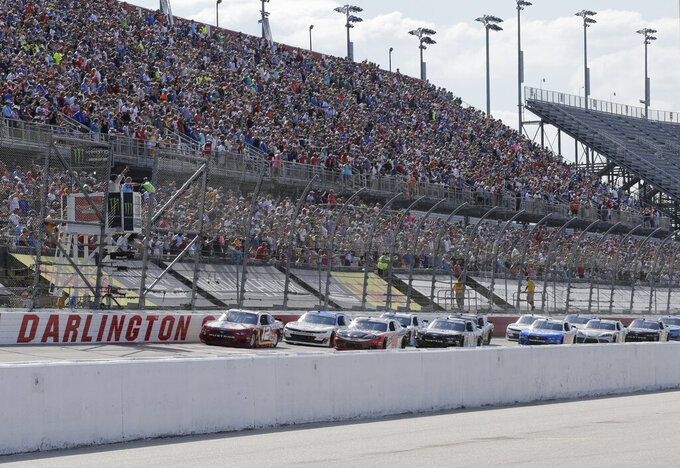 FILE - In this Aug. 31, 2019, file photo, Ryan Blaney leads the field to the start the NASCAR Xfinity Series auto race at Darlington Raceway in Darlington, S.C. NASCAR will resume its season without fans starting May 17 at Darlington Raceway in South Carolina. As NASCAR speeds back to the race track during the coronavirus pandemic the series has a heavy responsibility to set a safety standard that doesn't slow the return of other sports. (AP Photo/Terry Renna, File)

CHARLOTTE, N.C. (AP) — NASCAR is preparing to be the first major U.S. sport to restart its season during the coronavirus pandemic — a welcomed return to racing and one that will be closely watched by the public and other professional leagues for missteps.

More than 700 people — no fans — are expected to be at the track when the stock cars return in front of a national television audience on May 17 in Darlington, South Carolina.

It is NASCAR's moment to shine. A mistake could be a setback for other sports eager to get going and start earning revenue that has been on hold for the past month.

“We realize up front it’s a huge responsibility for us as a sport,” said Steve O'Donnell, NASCAR executive vice president. “We’re certainly going to learn as we go, but the process we put in place, I think gives the industry the confidence that we can be first.”

Darlington Raceway will host the first of seven races over 11 days, using both Darlington and Charlotte Motor Speedway in Concord, North Carolina. NASCAR worked with health professionals on a plan to meet federal guidelines and presented it to public health officials in the Carolinas. Suggestions were returned to NASCAR.

For at least the first seven races, O'Donnell said, NASCAR wants to use venues located within driving distance of teams based in the Charlotte area to eliminate air travel and hotel use.

Team rosters are limited to 16 participants, which includes the driver, the spotter and the owner. NASCAR has recommended those who travel to the tracks do not also go back to work in the race shops, a potential challenge for low-budget teams that might not even have 16 full-time employees.

NASCAR's Cup Series runs 40-car fields, which would mean at least 640 participants entering the track for race day. That does not include officials and inspectors and members of the media, including the broadacst team.

For now, the days of working shoulder-to-shoulder in the 70-year-old Darlington garage with fans crowded outside the stalls are over. Spectators won't be permitted for now at NASCAR races, which are scheduled only through May.

Indiana Gov. Eric Holcomb on Friday raised the possibility of allowing fans for the July 4-5 weekend at Indianapolis Motor Speedway, when it hosts both NASCAR and IndyCar races. Social distancing guidelines would be in place.

“We can do it. We're prepared for fans and we're prepared for without fans,” Mark Miles, who oversees both IndyCar and the Indianapolis Motor Speedway, told The Associated Press. “Just based on the size of our facility we can do it. And we've got time to figure it out. Things change on a daily basis and where we are today may be different July Fourth weekend. We've got time to get this right.”

For now, all eyes will be on Darlington. Drivers have been told they must self-isolate in their motorhomes, which will be spread all over the facility. Social distancing for teams will likely mean using both Cup and Xfinity series garages.

When Jimmie Johnson, Kyle Busch and the stars head to their cars, they will be required to wear face masks. The champagne spray for the winner in victory lane? Well, it's not entirely clear what sort of celebration will be appropriate in these strange times of sports.

But it will be different.

“We’re going to have one-way walkways for people, our rules strictly enforced,” he added. "If people aren’t complying with our rules for masks and social distancing, they will be removed from the premises.”

It will be strange times for a sport that became popular in part because fans can watch teams work, walk next to a driver in a pack of autograph seekers and even stand behind a pit stall as cars speed by on the track.

Other sports have soldiered on without fans, including bull riding and horse racing, and UFC has events planned beginning May 9 in Florida. But NASCAR, with its sprawling 36-race schedule from coast to coast and TV exposure, is drawing far more attention as it sets plans.

If NASCAR has any sort of setback, the ripple effect could harm IndyCar as it attempts to start its season June 6 at Texas Motor Speedway. Miles said the onus isn't only on NASCAR to get it right but every aspect of the reopening must be safe.

“On any front, it's a setback to everything if things don't go well, and for us, we think (NASCAR returning) is a great learning opportunity,” Miles said. “Anything we learn, they are going to know. Anything they learn, we are going to learn. It's a great opportunity for all of us to be smarter.”

Bigger questions loom nearly every weekend for motorsports. For IndyCar, the Indianapolis 500 won’t be run on Memorial Day weekend for the first time since since 1945 and no one knows if the usual 300,000-thousand plus spectators will be allowed in August.

Roger Penske now owns IndyCar and is also owner of a prominent three-car NASCAR team. The 83-year-old Penske will have seen NASCAR run at least four elite Cup Series races before IndyCar is scheduled at Texas.

“Mr. Penske obviously is now kind of in charge of what’s happening,” said Indianapolis 500 winner Alexander Rossi. “I think he’ll implement the good things and kind of learn from the things that don’t work, come up with a plan that is suitable for us.”