Max power: Verstappen gets podium for Red Bull and Honda 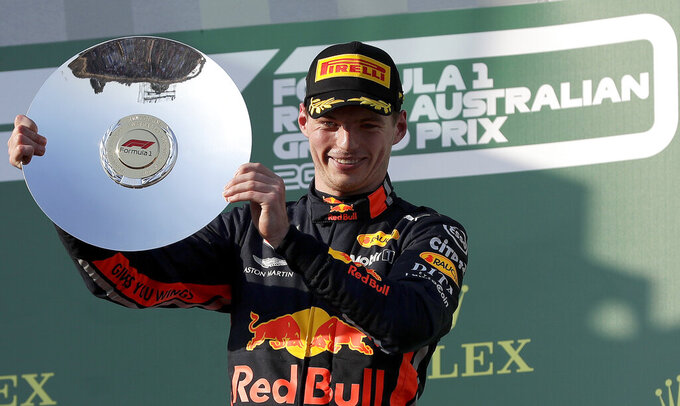 MELBOURNE, Australia (AP) — With one overtaking maneuver and consistent speed, Red Bull driver Max Verstappen showed that the 2019 Formula One season is unlikely to descend into another two-team race.

Verstappen overtook two-time defending Australian Grand Prix champion Sebastian Vettel on the outside just after halfway through the season-opening race on Sunday and kept powering away from the Ferrari ace to finish third. It was his sixth consecutive F1 podium finish, and delivered automaker Honda its first since 2008.

Most of the talk after winter testing was about the pace of the Ferrari cars, and if that would be enough to end the domination Mercedes has had on the F1 championships in recent years.

Valtteri Bottas led five-time world champion Lewis Hamilton in a 1-2 finish but then Verstappen split the two teams most expected to compete for the title, finishing behind both Mercedes and in front of both Ferraris.

"To be able to challenge Lewis at the end of the race and overtake Seb on-track, which around here is very difficult, is very positive," Verstappen said. "Since we started working together (with Honda) it has been amazing and I am really enjoying the partnership, so this is a well-deserved third place for all of us.

"The car was working really well and we also look strong on the straights, which is hopefully a good sign for the rest of the season."

"A fantastic start to the season with a podium finish at our first Grand Prix with our new power unit partner Honda, who haven't finished in the top three since 2008," Horner said. "Max put in a remarkable performance today and (made) a great pass on Sebastian.

"He went on to put Lewis under pressure for the rest of the race. It looked like we had a quicker car than Lewis in the second half of the race, and to do that here is very encouraging for us."

Pierre Gasly started from 17th in his first GP for Red Bull, as Daniel Ricciardo's replacement this season, but managed to work his way back to 11th.

"He drove the wheels off the car and it's a shame that it wasn't rewarded with a point." Horner said. "He raced hard and I'm sure his time will come. After a promising season opener, we now look ahead to Bahrain."

Gasly is looking forward to returning to Bahrain, where he placed fourth in the Toro Rosso last year.

And Verstappen is determined to improve on his result there, too, after failing to finish that race in 2018. He went on to post two GP victories — in Austria and Mexico — and finish off the season with five straight podium finishes, and seven in the last nine races to place fourth in the drivers' standings.

"In terms of speed we had throughout the race, it was a very good step forward from last year," said Verstappen, whose best previous result in Australia was a fifth-place finish in 2017. "Top speeds compared with the other two top teams.

"The engine has been performing really well without any issues, which is important. Time will tell if we can challenge for top spot."