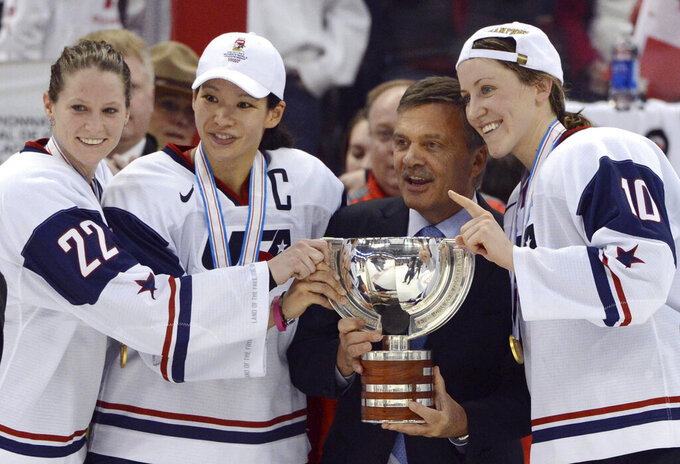 FILE - In this April 9, 2013, file photo, United States' Kacey Bellamy, Julie Chu and Meghan Duggan, from left, stand with IIHF president Rene Fasel as they are presented with the trophy after the U.S. team defeated Canada 3-2 in the gold medal game at the women's ice hockey world championships in Ottawa, Ontario. The women’s world hockey championships in Canada have been canceled because of the new coronavirus. International Ice Hockey Federation President René Fasel tells The Associated Press the decision was made by conference call Saturday, March 7, 2020. (Sean Kilpatrick/The Canadian Press via AP, File)

The Latest on the effect of the coronavirus outbreak on sports around the world:

Only hours after the Australian government called for its citizens to cancel all non-essential travel, the Australian rules Australian Football League (AFL) announced it was postponing its seasons until May 31.

Australia's various football leagues were among the few remaining professional sports playing on across the globe in its attempts to halt the spread of the virus.

The government's recommendation against non-essential interstate travel, and some states closing borders, prompted the AFL's suspension. The first round started last Thursday and was being played out across the weekend. The AFL women's competition was canceled.

Australia's main football leagues will attempt to continue their seasons despite a government recommendation against all "non-essential" travel.

In an address to the nation Sunday prime minister Scott Morrison called on Australians to forego all interstate or long-distance travel except for work, essential services or compassionate reasons.

While the five-nation Super Rugby tournament, involving four Australian teams, has been suspended the NRL, AFL and A-League are continuing to play in closed stadiums. Any outright ban on interstate travel would force those leagues also to suspend play.

Sanz had been in intensive care since the beginning of the week while being treated for the virus.

Sanz presided over Madrid from 1995 until 2000, leading the club to two European titles, a Spanish league title and a Spanish Super Cup title.

Under Sanz, Madrid ended a 32-year drought in Europe by winning its seventh European trophy in 1998.

The leader of track’s international federation says there’s no need to hold the Tokyo Olympics at any cost and a decision about the future of the games “may become very obvious very quickly in the coming days and weeks.”

Seb Coe, the president of World Athletics, said the Olympic world is managing the coronavirus day by day and “increasingly hour by hour.”

With qualifying events being disrupted at a high rate, Coe says the level playing field is in jeopardy and if that’s lost, then so is the integrity of the competition.

He says more meetings are set for next week to determine next steps.

The Olympics are scheduled to run from July 24 to August 9.

Milan says that the 51-year-old Maldini, who is the Italian club’s technical director, “became aware of contact with a person who subsequently tested positive for coronavirus and began to display symptoms of the virus himself.”

Milan adds that Maldini was “administered with a swab test” on Friday and the result came back positive.

Paolo Maldini retired from playing in 2009 after helping Milan to five European Cup and Champions League titles and seven Serie A championships.

The club says that Maldini’s 18-year-old son, Daniel, who recently made his Serie A debut for Milan, also tested positive.

Milan says that Paolo and Daniel Maldini “are both well and have already completed two weeks at home without contact with others. They will now remain in quarantine until clinically recovered, as per the medical protocols outlined by the health authorities.”

More than a dozen Serie A players have tested positive.

Paulo Dybala is the third Juventus player to test positive for COVID-19.

Juventus says that the Argentina soccer playmaker is in “voluntary home isolation (in Italy) and he is asymptomatic and fine.”

Dybala tweets that both he and his girlfriend Oriana Sabatini both tested positive but that “luckily we are in perfect conditions.”

A second Ottawa Senators player has tested positive for COVID-19.

The player was part of the recent road trip that included NHL games in San Jose, Anaheim and Los Angeles.

The total number of people on the trip was 52, including players, staff, media, guests and flight crew. Of those on the trip, 44 have shown no symptoms, eight have been tested, and two positive results were received. The team is awaiting more results from tests given over the past three days.

Everyone on the California trip was instructed to self-quarantine on March 13. The team says it is actively monitoring the situation and following all appropriate and professional guidelines.

Gulfstream Park has dropped purses for its seven stakes races on Florida Derby day by 20.5%, saying the changes were necessitated by the loss of on-track handle and revenue from the track’s casino.

In all, Gulfstream’s stakes purses that day will be $1.55 million, down from $1.95 million as originally planned.

Gulfstream was dark Friday while updating its safety protocols in response to the coronavirus pandemic. The track in Hallandale Beach, Florida resumed live racing on Saturday even while several top jockeys were choosing not to race because of health concerns.

Gulfstream has closed live racing to all fans since March 13. It closed its casino on March 16.

The president of Mexico's Liga MX soccer league has tested positive for coronavirus.

League President Enrique Bonilla said in a statement Friday that he doesn’t have serious symptoms but will remain in isolation and keep up with the situation of Mexican first-division soccer. League matches were suspended this week until further notice to help prevent the spread of the coronavirus pandemic.

Mexico has yet to declare legal bans on public gatherings but has encouraged citizens to maintain a healthy distance in crowded places.

A member of the Canadian Football League's B.C. Lions operations department has tested positive for COVID-19.

The Lions issued a statement Friday night announcing they were made aware of an employee who has the coronavirus. The person, who has not been named, is currently at home in isolation.

The team says the employee was last at club headquarters on March 13. The team remains in constant communication with doctors to determine the best course of action for ensuring the safety of other employees who have been in contact with the infected person.

The IIHF Council has confirmed that the 2020 Ice Hockey World Championship scheduled to take place in Zurich and Lausanne has been cancelled because of the ongoing coronavirus outbreak.

The decision to cancel the tournament didn't come as a surprise after IIHF President René Fasel acknowledged the likelihood of that happening following an IIHF executive committee conference call Tuesday.

Fasel cited numerous challenges facing officials, ranging from health directives in place limiting attendance to travel bans making it difficult for nations to send their teams. Another issue was players lacking practice time, with most of world’s hockey leagues having either indefinitely suspended or canceled their seasons.

On Monday, the NHL announced it will wait 45 days before it can provide guidance on when teams can potential reopen practice.

“It’s really scary,” said Fasel, who lives in Switzerland. “Europe is just collapsed. It’s really a strange feeling. Our neighbors yesterday, the federal counsel decided to close all the restaurants and everything. It’s like war.”

The owners of the Boston Bruins say they have established a $1.5 million fund for employees of the team and TD Garden who have lost work because of the suspension of the NHL season.

The Bruins were the last team in the league to commit to taking care of part-time and game-day employees.

According to a statement from the team, the Jacobs family would help workers “who will be financially burdened if the six remaining regular season Bruins games are not played.”

The NHL suspended its season on March 12 in response to the coronavirus pandemic.

Even though his side could potentially reach the Champions League quarterfinals, Lyon President Jean-Michel Aulas wants the French league to take priority.

Matches in both competitions are currently suspended because of the coronavirus outbreak.

“If we want to save the (French) league we must absolutely finish before June 30,” Aulas told RTL radio. “You have to make choices, be brave. Drop the Champions League, the (domestic) cup finals and international matches. Concentrate only on the (French) league.”

Aulas added: “I want the league to finish. Even in empty stadiums.”

Lyon leads Italian champion Juventus 1-0 from the first leg of their last-16 match in the Champions League on Feb. 26. The return leg in Turin has not been played because of the outbreak.

Marseille President Frank McCourt wrote to reassure the French soccer club's employees after they were put on temporary, technical layoffs.

“I am taking a few minutes to make sure you and your families are well,” McCourt said. “We are going through this difficult time together and we're seeing governments getting better and better organized.”

Marseille and other top-tier clubs have started putting players on temporary, technical layoffs, which translates to a cut in pay of 16 percent with the state picking up a portion of that to a monthly maximum of 5,400 euros ($5,810).

Therefore its impact is greater on those on the highest salaries, in terms of lost revenue.

The U.S. track federation added its name to a growing chorus of calls to postpone the Tokyo Games because of the coronavirus.

In a letter to the CEO of the U.S. Olympic and Paralympic Committee, USA Track and Field CEO Max Siegel urged the federation to advocate for the postponement of the Games, which are to start July 24.

USATF joins USA Swimming, which sent a similar letter to the USOPC on Thursday.

The USOPC leadership has been in agreement with the IOC, that it’s too soon to make any decisions regarding postponing the games.

Brazil’s Olympic Committee has called for the Tokyo Olympic Games to be postponed until 2021.

The Brazilian body said in a statement published on Saturday that the decision is a necessity due to the seriousness of the pandemic and “the consequent difficulty for athletes to keep their best competitive level.”

It also said that it continues to "trust in the International Olympic Committee.” Brazil organized the 2016 Games in Rio de Janeiro, the first in South America.

Formula One champion Lewis Hamilton says he has been self-isolating for more than a week after meeting people who later tested positive for the new coronavirus.

Hamilton was at a charity event in London on March 4 also attended by actor Idris Elba and Sophie Grégoire Trudeau, the wife of the Canadian prime minister. Both were later found to have the virus.

In a message on social media, Hamilton says he’s shown “zero symptoms” but has been isolating himself from other people ever since March 13, when the Australian Grand Prix was called off.

Hamilton said that “I did speak to my doctor and double checked if I needed to take a test but, the truth is there is a limited amount of tests available and there are people who need it more than I do.”