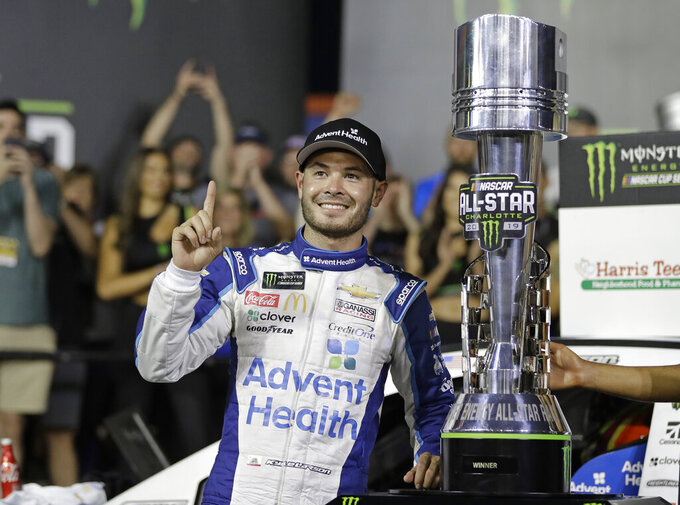 CONCORD, N.C. (AP) — Kyle Larson was among NASCAR's rising young stars in 2017 with four victories and his second straight playoff appearance. Then came a 20-month winless drought that left him and his Chip Ganassi Racing team searching for answers.

Larson believes he found several during a breakthrough weekend at Charlotte Motor Speedway.

He became just the second driver to win the Monster Energy Open to get into the All-Star race before outlasting Kevin Harvick and Kyle Busch to win the main event and $1 million first prize Saturday night.

The 26-year-old Larson understands he has much more to prove before declaring a turnaround, starting this week with the Coca-Cola 600, also at CMS. Still, it was a satisfying moment in more than a season of struggles.

"In losing close races, I feel like I've done a good job of not getting stressed out," Larson said. "With those losses that I've had, you grow from each and every one of them."

Larson has certainly had difficult moments since taking the checkered flag at Richmond in September 2017. Perhaps the most memorable came at Talladega Superspeedway last month when his No. 42 lifted off the track, struck the interior wall head on and went on a slow series of barrel rolls before stopping.

Larson was not hurt in the frightening incident that might have unhinged some drivers with less resolve.

"That wasn't the first flip I've ever had," he said. "I don't get scared from it. It doesn't rough me up. It doesn't bother me. Thankfully, I was uninjured, other than a stiff neck for a couple of days, so that also helps."

Larson said it's the problems on the track, like accidents that left him 39th in Texas and 37th at Richmond this season, that stick with him. "That stuff's harder to overcome more than flipping down the back stretch," he said.

Things began looking up at Dover this month with a third-place finish. He followed with another top-10 at Kansas to head to Charlotte with a belief things were improving.

Larson took the win in the Open, where three drivers advance into the main feature. He kept his cool — and stayed out of trouble — during the first three stages of the All-Star race before moving from sixth to the front with a tremendous push from Harvick on a restart 12 laps from the end. Larson held off Harvick and Busch for the win.

Larson discovered quickly he's got work to do for a fourth straight playoff appearance. The All-Star win neither locked him into the field nor gave him precious playoff points. He thinks his entire organization will have a boost heading into the rest of the season.

Larson's crew chief, Chad Johnston, said the team's frustrations were with results, not abilities. A winning attitude never wavered, even if the wins didn't come.

"We definitely haven't started off like we wanted to," Johnston said. "But normally, we start off pretty well and don't wind up finishing well. So hopefully we're on pace to kind of hit our stride to where we're stringing together some finishes and competing for wins."

Larson points to the string of bad finishes and no finishes.

"I knew we were putting ourselves in a bad spot to make it to the playoffs," he said.

Larson has taken steps to stay mentally and physically prepared He's spent more time improving his strength and stamina. He's also kept a good perspective during tough times. When he woke up Saturday, Larson's biggest concern getting his 4-year-old son, Owen, to his T-ball game on time.

Larson is ready for the grueling 600, NASCAR's longest race, where his best finish was a seventh a year ago.

"Hopefully, we can keep this balance that we've got with our car and stay strong next week, too," he said.