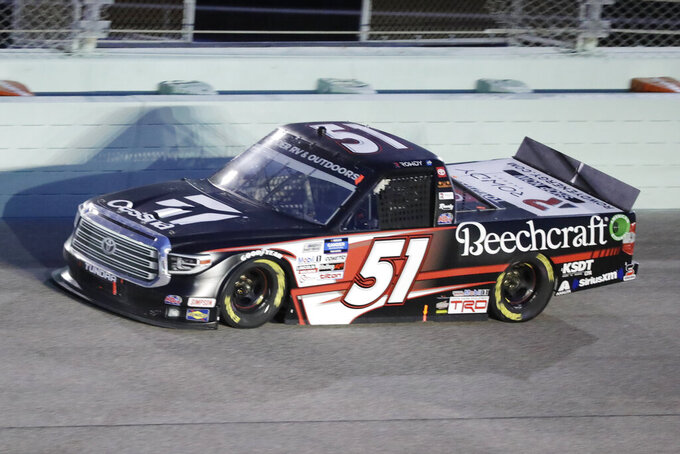 MIAMI (AP) — Kyle Busch’s slump wasn’t much of a slump.

And it’s over now, anyway.

Busch won the NASCAR Trucks Series race at Homestead-Miami Speedway on Saturday night, his 58th career win on the circuit and his eighth victory in his last 10 trucks starts. He’d been winless in his last two outings, which — by his standards behind the wheel of a truck — constitutes a drought.

Busch hadn’t gone winless in three consecutive trucks starts since 2017. He was about five seconds clear of the field when the second stage ended at Lap 60, part of a dominant night where he led 82 of the 134 laps.

“It was awesome tonight," Busch said.

There were a few challenging situations, though nothing derailed Busch for long.

Busch had to start at the back of the field, then serve a pass-through penalty on top of that, after failing pre-race inspection. But he managed to stay on the lead lap, then worked his way to the front and made it all seem easy.

“We've thrown away the last two races," Busch said. “This is how we're supposed to perform and run and look."

The race was red-flagged for 16 minutes with 26 laps to go after Sheldon Creed crashed into the yellow protective barrels at the entrance to pit road and caused a huge mess. Once things resumed, it didn’t take long for Busch to reclaim the top spot.

And then a late caution sent the field into a high-pressure restart with seven laps left, but Busch just pulled away — this time, for good.

Tyler Ankrum was second and Ross Chastain, who won the first stage, held off Chase Elliott for third.

Brett Moffitt won the trucks race at Homestead in 2018 but didn’t even get through 20 laps Saturday night, after he was part of a crash that also ended Zane Smith’s race early. Elliott was also part of the crash, getting turned sideways after Smith appeared to lose control but managing to avoid disaster even with trucks coming at him amid smoky confusion.

“Pretty much just ran out of talent, really,” Smith said.

Elliott pitted, got four new tires to replace those ruined in the skid, and was part of the race within the race — the battle for second behind Busch — at the end.

Ray Ciccarelli was in the race after a week where he made plenty of news for perhaps less-than-ideal reasons.

A post on his since-deactivated Facebook account earlier in the week, one that followed NASCAR’s decision to ban the Confederate flag at races, said Ciccarelli planned on quitting the sport after this season because he didn’t want to participate in “political BS.”

“I could care less about the Confederate Flag but there are ppl that do and it doesn’t make them a racist,” the post said.

Bayley Currey was announced earlier in the week as the driver of the No. 49 truck, but he indicated his split from the Ciccarelli’s CMI Motorsports team in a tweet he posted Thursday. He wrote “Have helmet, will travel” and his post was accompanied by the hashtag of “dowhatisright.”

CMI had planned for Ciccarelli to drive in the race in the No. 83 truck, before he switched to the No. 49. The 83 did not start, and Ciccarelli finished 29th.