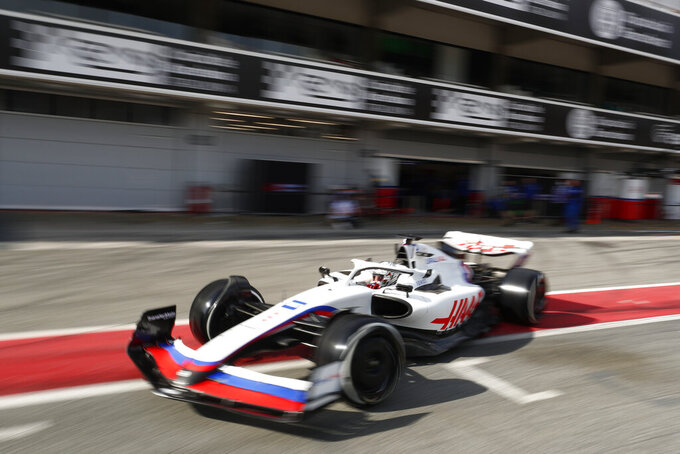 LAS VEGAS (AP) — The relationship between Haas F1 and its Russian sponsor and driver became untenable following Russia’s invasion of Ukraine, the owner of the United States-based Formula One team said Sunday.

Logos for Haas Automation, the CNC machine tool manufacturing company Haas founded, will be on his two cars at this week's F1 test in Bahrain. Haas said reserve driver Pietro Fittipaldi will fill Mazepin's seat in Bahrain, but he wasn't clear on a permanent replacement.

“We're in the process of looking at several candidates, we'll see who is available and what we have to deal with, but we'll have somebody by Wednesday,” Haas said. “Pietro will definitely be in it, that's what he's for, he's the test driver.”

Fittipaldi is the grandson of two-time F1 champion Emerson Fittipaldi and ran two races for Haas in 2020 as the replacement for injured driver Romain Grosjean. The 25-year-old was born in Miami and holds dual citizenship in Brazil and the U.S.

But just because Haas said Fittipaldi will be in the car in Bahrain, that does not mean he'll be teammates this year with Mick Schumacher. Haas last season overhauled his lineup with rookies Mazepin and Schumacher, the son of seven-time F1 champion Michael Schumacher.

Haas' business plan allowed for a difficult 2021 season — Mazepin and Schumacher were at the back of the grid nearly every time on the track — but the introduction of a new car and an improved engine this season could make the team more competitive. The Haas organization also believes the 22-year-old Schumacher can be a global superstar.

“I think we're looking. I think we'd obviously like to get someone with a bit more actual experience,” Haas told the AP. “We just have to see what's available."

Haas also insisted that his CNC company has always been the primary source of sponsorship for the F1 team and that Uralkali was only “the title sponsor” in 2021 when both F1 cars were branded in the colors of the Russian flag. The Haas team last month scrambled to remove the Uralkali branding from its cars when Russia invaded Ukraine at the same time F1 was testing in Barcelona.

Haas crew members were seen scraping the logos off the team trucks after the second of three days of testing, and the cars were plain white for the final session. It was important, Haas said, to remove the branding immediately even as the team studied its contracts to learn its options.

“Haas has always been the major, primary sponsor, I don't know why people said it became a Russian team. Haas Automation was always on the car," he said.

He has dumped Uralkali but said the team is fine. Haas also co-owns a top NASCAR team with Tony Stewart.

“We're good. We're fine. We'd like more money, of course, but we're fine,” he said. “This just gives us a bigger negative number.”