Crew chiefs feel the heat to be perfect in NASCAR finale 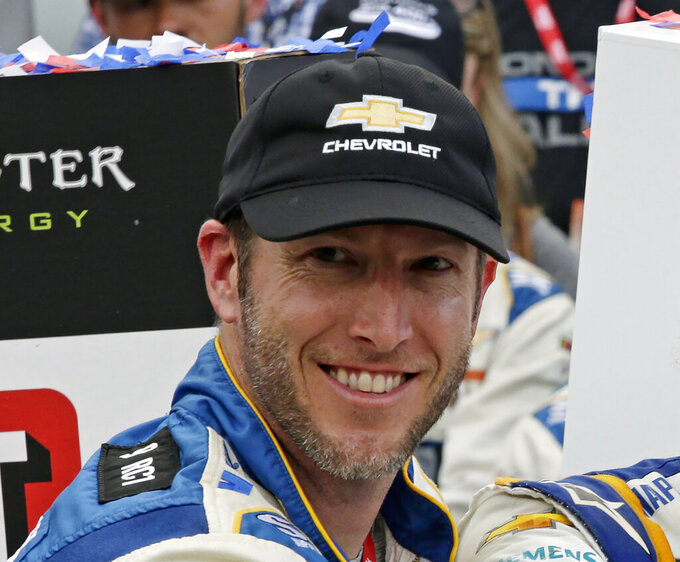 FILE - In this Sept. 29, 2019, file photo, crew chief Alan Gustafson celebrates in victory lane after Chase Elliot won a NASCAR Cup Series auto race at Charlotte Motor Speedway in Concord, N.C. The pressure will be intense for crew chiefs in NASCAR's championship race. There is no practice or qualifying under COVID-19 protocols, so the team leaders must be on top of their game. (AP Photo/Wesley Broome, File)

CHARLOTTE, N.C. (AP) — The NASCAR championship was in clear reach when Denny Hamlin made his final pit stop in last year's title-deciding finale. With everything on the line, his crew chief went with an aggressive adjustment aimed at gaining one last burst of speed.

Chris Gabehart called for a large, thick patch of tape across the front right side of the No. 11 Toyota. It was a gamble Gabehart was willing to take, believing “you’ve got to dance with the fire to beat these guys.”

The aerodynamic adjustment backfired, Hamlin had to pit again to avoid overheating his engine, and his title chances were over. As Gabehart leads Hamlin back into the championship race Sunday, the crew chief has no fear of overthinking his team out of title contention.

“You've certainly got to learn from your mistakes and your successes, right? That’s part of getting better,” he said. “I’m not concerned of making those same issues again. For better or worse, we’re going to put our best foot forward, give Denny the best platform we can as a race team to go out and perform, then we’re going to let him perform.”

The pressure will be intense Sunday at Phoenix Raceway for both the drivers and their team leaders. There is no practice or qualifying under COVID-19 protocols, so the cars must be dialed-in when they are unloaded on race day.

The four-driver field this year includes two former champions: Joey Logano, who won in 2016 under this current format, and his Team Penske teammate Brad Keselowski, won won in 2012 under different rules. Hamlin of Joe Gibbs Racing is back in the final four for the third time and Chase Elliott is making his championship debut for Hendrick Motorsports.

Only Hamlin and Gabehart, in their second season as driver and crew chief, have previously raced for a championship together.

Paul Wolfe won the 2012 title with Keselowski but now crew chiefs Logano. Keselowski is in his first season with newcomer Jeremy Bullins, and Elliott is teamed with Alan Gustafson, who led Jeff Gordon in Gordon's 2015 final four appearance.

Gustafson believes he can help Elliott manage the stakes of the winner-take-all final race as NASCAR's most popular driver competes in his first championship.

“I don’t think you can really be prepared for it until you go through it,” said the veteran Hendrick Motorsports crew chief. “Going through this weekend, we can help prepare him for it. It’s a unique experience. I think you have to go through it to really understand it and learn how to manage it.”

The dynamic at Team Penske is interesting in that Logano and Keselowski both worked through the cornavirus-impacted season with new crew chiefs, having to learn their team leaders with little track time. The Penske organization made a three-team swap at the start of the year and Wolfe, the only crew chief in the finale with a title, is teamed with the only driver to win a championship in this format.

Wolfe doesn't think prior title runs give them an edge, but points to Logano's win three weeks ago at Kansas that locked the No. 22 team into the finale. Wolfe has had extended time to work on their Ford for Phoenix, where Logano won in March before the pandemic shutdown.

“I feel like we have an advantage because we won at Kansas, (I've) have had maybe a little more time to put thoughts into how do we want to approach the race,” Wolfe said.

Bullins has yet to compete in a race with such high stakes but takes pride in the work he's done with Keselowski. The Penske organizational swap on paper put Keselowski with the least accomplished crew chief on the roster, a move at the time Keselowski said he hoped gave him the kick he needed to elevate his performance.

Keselowski will go to Phoenix with four wins and drive the Ford that won at both New Hampshire and Richmond.

“When we made the swap, we immediately added a ton of experience to our team. We’ve just tried to take advantage of Brad’s experience, use that to better what we were doing as a race team, put ourselves in a good spot,” Bullins said. “I think we’re just trying to make it no more than what it is, not make it bigger than what it is. Obviously there’s a lot on the line.”