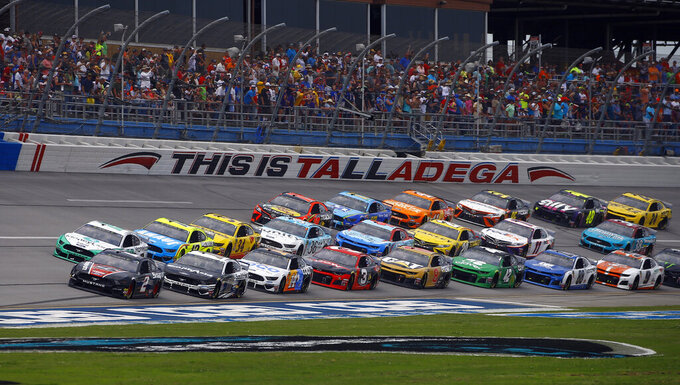 CHARLOTTE, N.C. (AP) — Anything and everything could have gone wrong at Talladega Superspeedway, where the cars were too fast, engine makers feared their motors couldn't go 500 miles without overheating and drivers insisted they had no idea whatsoever how they planned to race.

It could have been a disaster.

But NASCAR made adjustments on the fly and felt confident Talladega was going to be a good show, even as insiders worried the event would be either terribly boring or, more concerning, a dangerous wreckfest.

All things considered, NASCAR produced one of the better Talladega races in recent memory even though Kyle Larson barrel-rolled down the Alabama track on the last lap of Sunday's race.

Talladega is dangerous, the speeds seemed dicey and the present NASCAR field has significant talent discrepancies. The veterans understood that closing rates were uncomfortably quick and drivers unable to adjust would steamroll over the cars in front of him.

That means wrecks. The season-opening Daytona 500, run two months ago under an old rules package, had been a demolition derby and there was every reason to believe Talladega, with so much uncertainty and new rules, was going to be Daytona redux.

Except it wasn't, and NASCAR chief racing development officer Steve O'Donnell told The Associated Press the series felt confident it had a package that could deliver safe and exciting racing.

"Until an actual race takes place you never know what you'll see," O'Donnell said Monday, adding testing and data had given NASCAR engineers confidence safety had not been compromised. "You go into the event confident in what you do."

There were so many unknowns, though, and the first practice under the 2019 rules package was jarring because 21 cars topped 200 mph in the first session. The engine makers approached NASCAR and said attrition was going to be an issue, so NASCAR made a midday addition of a 1-inch wicker strip to the top of the spoiler before final practice.

Ryan Newman then hit 204.157 mph, logging the speed as he led a single-file group of cars through the draft to another pack. Newman has taken many a trip through the air at Talladega and told NBC Sports speeds were "way too fast. We've established that over the last 10 years. That's when cars get airborne."

It felt ominous headed toward the green flag. But O'Donnell said NASCAR staunchly believed it had landed on a combination that would make for very good racing.

In the end, Chase Elliott got his first win of the season — first for maligned Chevrolet, first for Hendrick Motorsports — in an action-packed event in which the 38 lead changes were the most since 2014. There were 10,650 passes under green and early concern over dangerously fast closing rates instead allowed drivers to pull off bold and brazen moves.

The drama leading into the race will quickly be forgotten. The lasting memory of Sunday will be that NASCAR had one of its finest moments in a very long time. The racing was white-knuckled and the strong crowd was breathless until Elliott took the checkered flag.

Then the fans roared in approval for NASCAR's new favorite son, a second-generation superstar.

Talladega for 30 years was Earnhardt country and that shifted when Elliott, from nearby Georgia and the son of Hall of Famer Bill Elliott, felt the rousing approval from the audience. Everyone knows NASCAR attendance is slumping, but the fans still show up at Talladega, which has embraced its image as the party stop on the NASCAR circuit and become a bucket-list event for the traveling sports fan.

"The post-race was unbelievable," Elliott said. "I've never had a crowd that felt like (it was) in the palm of your hands. That's one of the coolest moments of my racing career."

His victory was memorable — and so was the Larson roll, which NASCAR is already researching. His car took flight seemingly by itself after he'd been hit and spun through traffic, and once it was off its wheels, the Chevrolet rolled at least a half-dozen times.

Chip Ganassi Racing took the car after the race, but it is available to NASCAR engineers eager to study what caused the spectacular roll. O'Donnell said NASCAR hoped to have a better understanding by the end of the week, and that while early speculation is that is damage to Larson's car made it susceptible to going airborne, "we've got to look at everything."

Larson was not injured, a testament to NASCAR's safety improvements, but the incident should not be brushed aside. And if that is the lone complaint from what could have been a chaotic weekend, then NASCAR did a very good job at Talladega.