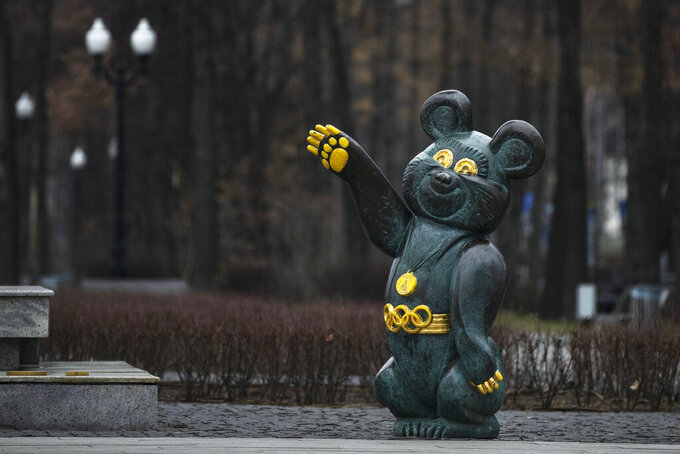 A monument to Misha the Bear, the mascot of the Moscow 1980 Olympic Games, in a park in Moscow, Russia, Monday, Dec. 9, 2019. The World Anti-Doping Agency has banned Russia from the Olympics and other major sporting events for four years, though many athletes will likely be allowed to compete as neutral athletes. (AP Photo/Pavel Golovkin)

LAUSANNE, Switzerland (AP) — Russia was slapped Monday with a four-year ban from international sports events, including next summer's Tokyo Olympics, over a longstanding doping scandal, although its athletes will still be able to compete if they can show they are clean competitors.

The ruling by the World Anti-Doping Agency's executive committee means that Russia's flag, name and anthem will not appear at the Tokyo Games, and the country also could be stripped of hosting world championships in Olympic sports.

The sanctions are the harshest punishment yet for Russian state authorities who were accused of tampering with a Moscow laboratory database. Russia's anti-doping agency can appeal the decision to the Court of Arbitration for Sport within 21 days — an action it has signaled it would take.

“Russia was afforded every opportunity to get its house in order ... but it chose instead to continue in its stance of deception and denial,” WADA president Craig Reedie said.

Russian athletes can compete in major events only if they are not implicated in positive doping tests or if their data was not manipulated, according to the WADA ruling.

For soccer's 2022 World Cup, WADA said the Russian team will play under its name in the qualifying program in Europe. If it qualifies to play in Qatar, the team name must be changed to something neutral that likely would not include the word “Russia.”

At the past two track and field world championships, Russians competed as “Authorized Neutral Athlete.” A softer line was taken ahead of the 2018 Pyeongchang Winter Games, when the International Olympic Committee suspended the Russian Olympic body yet allowed athletes and teams to compete as “Olympic Athlete from Russia.”

Legal fallout from the WADA ruling at CAS seems sure to dominate preparations for the Tokyo Olympics, which open July 24.

Russian Prime Minister Dmitry Medvedev urged sports organizations to appeal and said WADA's ruling was “a continuation of this anti-Russian hysteria which has already become chronic.”

The latest round of sanctions were imposed because tampering with the Moscow data was a new violation of anti-doping rules committed as recently as January.

Handing over a clean database to WADA was a key requirement given to Russia 15 months ago to help bring closure to a scandal that has tainted the Olympics over the last decade.

WADA investigators and the IOC agreed that evidence showed Russian authorities corrupted data from the Moscow lab that was long sealed by security forces. Hundreds of potential doping cases were deleted and evidence falsely planted to shift the blame onto whistleblowers.

“Flagrant manipulation” of the data was “an insult to the sporting movement worldwide,” the IOC said last month.

Athletes whose data was manipulated in the 2012-15 testing period now face disciplinary cases by their sport's governing body.

“Yes, we do know who those athletes are. They will be kept out of the (Tokyo) Games,” said British lawyer Jonathan Taylor, chairman of the WADA panel whose proposed sanctions were unanimously approved Monday.

However, the doping watchdog's outgoing vice president was left frustrated by an unwillingness to fully expel Russia from the Tokyo Olympics and 2022 Beijing Winter Games.

“I’m not happy with the decision we made today. But this is as far as we could go," said Linda Helleland, a Norwegian lawmaker who has long pushed for a tougher line against Russia. “This is the biggest sports scandal the world has ever seen. I would expect now a full admission from the Russians and for them to apologize on all the pain all the athletes and sports fans have experienced.”

Although the IOC has called for the strongest possible sanctions, it wants those sanctions directed at Russian state authorities rather than athletes or Olympic officials.

That position was opposed by most of WADA’s athlete commission. It wanted the kind of blanket ban Russia avoided for the 2016 Rio de Janeiro Olympics and the 2018 Pyeongchang Winter Games when a state-run doping program was exposed by media and WADA investigations after Russia hosted the 2014 Olympics in Sochi.

The decision to appeal has been stripped from RUSADA chief executive Yuri Ganus, an independent figure criticizing Russian authorities’ conduct on the doping data issue. Authority was passed to the agency’s supervisory board after an intervention led by the Russian Olympic Committee.

The ROC on Saturday labeled the expected sanctions as “illogical and inappropriate.”

Russia has stuck to its claim that deceptive edits in the data were in fact made by WADA’s star witness, Grigory Rodchenkov. The former Moscow lab director’s flight into the witness protection program in the United States was the subject of an Oscar-winning documentary.

“As usual, Russia has disregarded all of its promises and obligations to clean sport,” Rodchenkov said Monday in a statement from his lawyers.

Sports fans worldwide will still be watching top-tier events from Russia in the next four years despite the hosting ban.

In soccer, St. Petersburg will still host four games at the 2020 European Championship and the 2021 Champions League final, because European soccer body UEFA is not bound by the ruling. Nor is the Formula 1 racing series, which goes to Sochi's Olympic Park for a race each year.

“The contract is valid through 2025,” Russian Grand Prix spokeswoman Tatyana Rivnaya told the AP in a telephone interview.

World championships in lower-profile Olympic sports — including luge in two months and wrestling in 2022 — could stay in Russia due to legal difficulties moving them.

“There will be practical issues," Taylor acknowledged, "and we can’t ignore those.”

However, Taylor said a block on Russia bidding for or being awarded sports events in the next four years would have a longer effect beyond the ban.