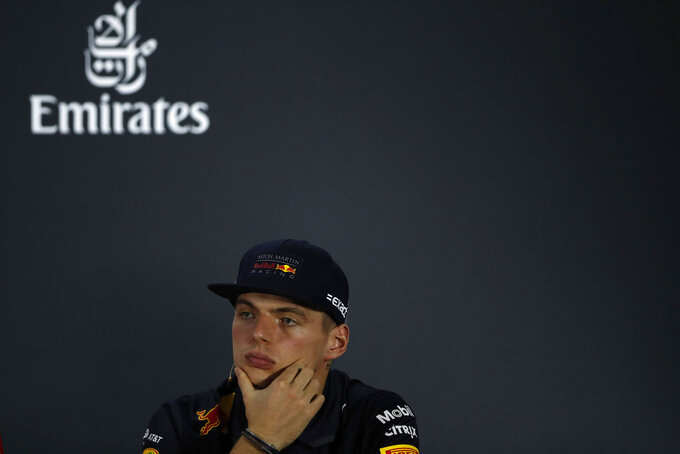 ABU DHABI, United Arab Emirates (AP) — Not only is Max Verstappen unrepentant over his altercation with Esteban Ocon at the Brazilian Grand Prix, he suggests the French driver got away lightly with a few shoves to the chest.

Although he had already been lapped and had little to fight for, Ocon refused to let race leader Verstappen past him two weeks ago. The pair tangled, sending the Dutch driver spinning back to second place and pushing Lewis Hamilton up to first at Interlagos.

It cost Verstappen his third victory of the season, and sixth of his Red Bull career. He stopped a post-race interview when he saw Ocon, squaring up to his rival and shoving him three times before angrily pointing a finger at him as he walked away.

Asked at the Abu Dhabi GP on Thursday if he had regrets, Verstappen replied: "No, not really. I was after an apology and I got a different response."

"I lost a victory, so I think from my side I was really calm. It could have been much worse," added the 21-year-old Dutchman, who is known as much for his fiery temper as his daredevil driving. "I thought it was quite a calm response. What do you expect me to do? Shake his hand and say, 'Thanks very much'.

Although Ocon breached race etiquette as a back-marker by not moving aside for the leader, Verstappen seemed equally upset by the Force India driver's comments.

"You guys don't hear what's being said ... You just see me pushing," he said. "But if you understood the whole conversation, I think it would be different."

Ocon's words were "something I didn't expect to hear," Verstappen added, before using an expletive.

The Red Bull driver must now perform two days of public service within six months, a punishment he calls harsh.

"We're not robots," Verstappen said. "We are all here to win. You are in that position and it gets taken away from you."

At a news conference on Thursday, the two men sat with Ferrari pair Sebastian Vettel and Kimi Raikkonen between them.

Ocon was stone-faced throughout but had his say.

"It's not a great thing to be involved in a crash with the leader," he said. "I'm sorry for Max. It was his race to win.

"The team came on the radio saying, 'You can un-lap yourself if you want, if you are faster.' I just went for it," the 22-year-old Frenchman said. "Even if Max said the opposite, he would like to come back on what he did after the race."

The pair have competed since their karting days. Verstappen was evasive when they were asked how they felt about each other, Ocon more forthcoming.

"I will respond, if he cannot, I will," Ocon said. "We've been racing a long time. The important thing is it stays good racing and good fun for the fans, but doesn't go over the top."

Four-time world champion Vettel has had altercations in the past with Verstappen and former teammate Mark Webber.

"We are here to fight for something that means the world to us. For people watching, it's a show. For people reporting about the show, it's a job. For us it's a job, but it's our lives," Vettel said. "Emotions are part of sports."