Put me in, Coach! Gibbs gets top ride on grandfather's team 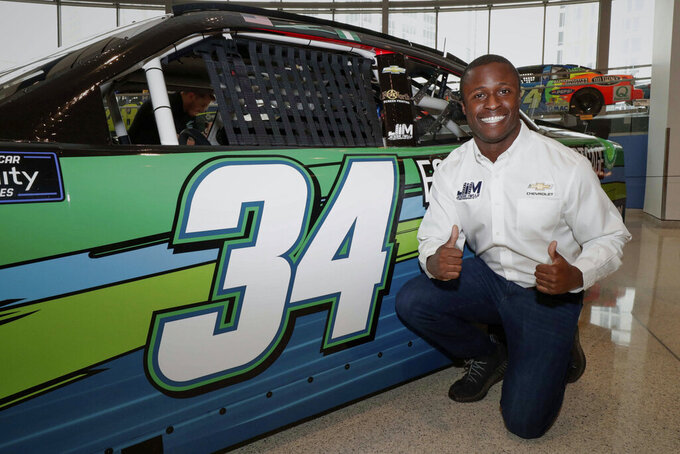 NASCAR driver Jesse Iwuji poses with the No. 34 Chevrolet Camaro SS he will drive in the upcoming 2022 NASCAR Xfinity Series season at the NASCAR Hall of Fame in Charlotte, N.C., Monday, Feb. 7, 2022. Iwuji will run his first full season in NASCAR with backing from Pro Football Hall of Famer Emmitt Smith and General Motors.(Garry Eller/HHP for Chevy Racing via AP)

Ty Gibbs is stepping into arguably the top ride in NASCAR’s second-tier Xfinity Series. The grandson of Pro Football and NASCAR Hall of Famer Joe Gibbs – who’s affectionally called Coach – will race full time for his grandfather’s team in the No. 54 Toyota this season.

That car won 10 times in 2021, with Gibbs behind the wheel for four of them. Kyle Busch (five) and Christopher Bell (one) also drove it to victory lane. Gibbs earned rookie of the year honors and was rewarded with a full-time ride with the family business. He also won the ARCA Series title.

The 19-year-old driver’s promotion leaves him one step away from the top-tier Cup Series, and that jump could happen after another successful season. The Xfinity opener is Saturday at Daytona International Speedway.

Gibbs’ Cup team features former series champions Kyle Busch and Martin Truex Jr., as well as three-time Daytona 500 winner Denny Hamlin. Busch, 36, recently lost his primary sponsor, M&Ms, and is entering the final year of his contract with Gibbs. Truex, 41, also is beginning the final year of his deal. And the 41-year-old Hamlin started his own team, 23XI Racing, with NBA great Michael Jordan last year and could eventually land there as a driver/owner.

Gibbs is one of many story lines worth watching this season.

Jesse Iwuji, a lieutenant commander in the Navy Reserve, will become the second fulltime Black driver this season with plans to run in the Xfinity Series. Iwuji co-owns his team alongside Pro Football Hall of Fame running back Emmitt Smith, who entered NASCAR a year after Jordan and entertainer Pitbull joined the ownership ranks.

Natalie Decker is the only woman entered in the Xfinity opener. Decker is scheduled to drive a partial schedule for Reaume Brothers Racing. The Wisconsin native made five Xfinity starts in 2021, with her best finish being a 24th-place showing at Talladega Superspeedway.

Decker is one of seven women announced in Busch Light’s Accelerate Her Program, a three-year, $10 million commitment that takes aim at the inequity of resources available to female drivers who are 21 or older. The goal is to provide more funding, track time, media exposure and training to female drivers.

“We’ve been lucky to witness some of the greatest women drivers in history, but it can’t be argued that the NASCAR Cups Series field is dominated by male drivers,” said Krystyn Stowe, a brand director at Anheuser-Busch. “Through our sponsorship rights and our platform, we’re seizing the opportunity to make historic progress toward gender inclusivity and while the immediate program goals may start here, we hope the sentiment will carry far beyond that, encouraging the broadest level of inclusivity across all sports.”