NASCAR returns to Portland with an Xfinity Series race 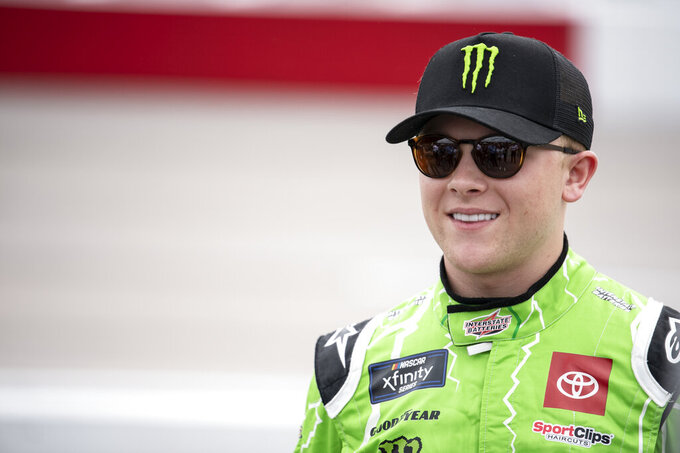 Ty Gibbs looks on prior to a NASCAR Xfinity auto race at Darlington Raceway, Saturday, May 7, 2022, in Darlington, S.C. (AP Photo/Matt Kelley)

PORTLAND, Ore. (AP) — Rain is welcoming NASCAR back to the Pacific Northwest — of course.

NASCAR's Xfinity Series was set to debut Saturday at Portland International Raceway for a rare stand-alone event for the second-tier national series. It's the first NASCAR event in the region in 22 years, and falls on the same weekend as the premiere Cup Series debuts at St. Louis.

For the Xfinity Series, its a chance to shine in a region starving for stock cars.

“I think it's cool for Xfinity to be away and be on our own, and be the premier series this weekend,” said Sheldon Creed, who was fastest in Friday morning practice. “I think it's good for our sport and I like that we're traveling to other states, and cultures, to try to bring interest to our sport.”

The last NASCAR-affiliated race in the region was the Truck Series, which visited PIR and Evergreen Speedway in Washington in 2000. NASCAR has long eyed racing in this part of the country but until this year was not able to get its national series' on Portland's schedule.

Now at the permanent road course located 20 minutes north of downtown Portland, drivers were enjoying the change of scenery. Without the Cup and Truck Series as companions, Friday's atmosphere was low-key and reminded drivers of their earliest days in racing.

“It’s kind of just more of a relaxed vibe,” said Myatt Snider. “It kind of gives me like a late model race-type vibe. I grew up racing late models in the southeast around, you know, North Carolina, South Carolina, and Virginia, Tennessee, all that stuff. And so I like that vibe. You know, it’s more laid back.”

The Pacific Northwest is known for its rain and NASCAR wasn't spared. Drizzly conditions marked Friday morning's practice on the 12-turn, 1.97-mile road course located along the Columbia River. The forecast called for more rain and temperatures in the cool 60s all weekend, but drivers were preparing for anything.

“I think I've got a good feel for it," driver Ty Gibbs said about the damp conditions. “I think a good rain driver is going to be very vigilant and he's going to be very aware of everything going on. So hopefully I can do that.”

Road course ringer A.J. Allmendinger is the favorite in the field and he's no stranger to Portland from his open-wheel days. Allmendinger won the Grand Prix of Portland at PIR in 2006 — the first American to win a Champ Car event since Ryan Hunter-Reay two years earlier.

The Grand Prix of Portland ran from 1984 to 2007 and was usually held in conjunction with the city's annual Rose Festival in June. The race returned under the IndyCar Series banner in 2018 and is held over Labor Day weekend.

Allmendinger, the Xfinity Series points leader, finished 19th last weekend at Charlotte Motor Speedway after a tire problem in the second half of the race. Josh Berry grabbed the victory for JR Motorsports.

Allmendinger plans a hectic double this weekend and will depart Saturday night after the race in Portland for St. Louis, where he will drive the Cup car on Sunday.

He'll be challenged in Portland by Gibbs, who has two road course victories among his seven overall wins. The 19-year old was runner-up last weekend in Charlotte.

“I really like the Northwest, so it's cool to come out and race on a fun track," Gibbs said. “I hope NASCAR will eventually go out to some of these (other) tracks. It's fun to run in the rain. It's just different, and I think different is good.”