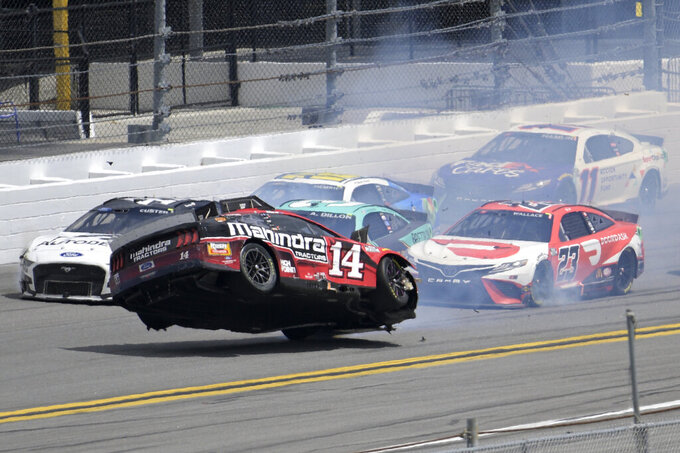 Chase Briscoe (14) lifts and spins in the air along the front stretch after coming out of turn 4 during a NASCAR Cup Series auto race at Daytona International Speedway, Sunday, Aug. 28, 2022, in Daytona Beach, Fla. (AP Photo/Phelan M. Ebenhack)

DARLINGTON, S.C. (AP) — Austin Cindric has had more than six months to think about NASCAR's playoffs. The rookie racer thinks he's got a winning plan: maintain his steady, head-down approach when the 10-race postseason begins Sunday at Darlington Raceway.

Cindric is among a group of four first-timers in the field of 16, along with Chase Briscoe, Ross Chastain and Daniel Suarez. All are excited — and filled with questions about how things will unfold when the green flag waves for the Southern 500.

“I want to do my job. The only expectation I have is to have a team that all the resources and capability to do that,” said Cindric, who won the season-opening Daytona 500. “We've certainly delivered on a lot of occasions.”

Cindric will start 14th on the playoff grid. Chastain, with two wins and eight other top-five finishes, starts the playoffs in third behind regular-season champion Chase Elliott and No. 2 seed Joey Logano.

Defending Cup Series champion Kyle Larson is the fourth seed. Briscoe is seeded 12th and Suarez right behind in 13th.

Logano, who won the May race at Darlington, took the pole Saturday and will lead seven playoff racers on the grid. Christopher Bell was second, followed by William Byron, Tyler Reddick, Kyle Busch, Cindric and Larson.

Elliott will be the playoff racer furthest back in the field, starting 23rd.

Darlington starts the three-race opening round. Chastain said his week has been “surprisingly normal” after all he'd heard about playoff anxiety.

“It's wild. I thought there would be differences, I thought I would feel different or wake up and not be able to sleep,” Chastain said. “I'm really happy that it's been a normal week.”

Suarez, of Trackhouse Racing, also has felt this was a regular week, no matter that a Cup Series trophy awaits at the end of the next 10 weeks.

“I think if we can stay calm, relax and continue to do exactly the same thing we've been doing the last few months, we're going to be in good shape,” said Suarez, NASCAR's first Mexican-born race winner.

The Southern 500 kicks off the three-race first round, which continues at Kansas and Bristol. The Darlington winner, as long as he's in the playoffs, advances to round two among the final 12 competitors.

The second round consists of Texas, Talladega and the Charlotte Roval, after which the playoff field is cut to eight.

The top four after the third round of Las Vegas, Homestead-Miami and Martinsville advance to the playoff finale on Nov. 6 at Phoenix, where the title will be awarded.

WHAT'S NEXT FOR KYLE BUSCH?

Kyle Busch, the NASCAR series champ in 2015 and 2019, said he sees an end in sight to discussions about his future in racing.

Busch's longtime sponsor, Mars, Inc., is pulling out of NASCAR after this season. Busch said this week that he's got multiple paths in front of him, including a return to Joe Gibbs Racing.

Still, “time is a ticking,” he said. "There’s a lot of other options and a lot of other dominoes that need to fall. Talking amongst others, I’m the first one that needs to go.”

Busch said Thursday he expected to have decision about next year in seven to 10 days.

WHEN WILL KURT BUSCH RETURN?

Denny Hamlin, co-owner of 23XI Racing with Michael Jordan, said Kurt Busch is still recovering from a concussion and doesn't know when Busch might come back to the car.

Hamlin said the recovery had “plateaued” at about 80% and Busch needed more time before returning to the track.

Busch was hurt during a qualifying crash at Pocono in late July. He missed the final six races of the regular season and gave up his playoff spot when he was not cleared to return for the Southern 500.

Bubba Wallace was switched to Busch's No. 45, which is in contention for the owner's title. Wallace will run that machine the rest of the season.

Kyle Larson and Denny Hamlin are the oddsmakers' picks to win the Southern 500 at 6-1, according to FanDuel Sportsbook. Tyler Reddick and Chase Elliott were next at 7-1 with Ross Chastain at 7.5-1. ... There are several playoff regulars not in the field of 16 who've had success at Darlington and could throw a wrench into the plans of those contending for a title. Martin Truex Jr. and Brad Keselowski, both past NASCAR series champions, have a combined three Darlington wins over the past six years. ... Kyle Larson, who won the series title in 2021, thinks the chase this year is wide open as the Next Gen car has evened expectations of all playoff hopefuls. ... The winner of the opening playoff race has gone on to win that season's title four times, Kurt Busch in 2004, Tony Stewart in 2011, Brad Keselowski in 2012 and Martin Truex Jr. in 2017. ... Darlington announced its first Southern 500 sellout since 2019. The listed capacity of the facility is about 47,000. Officials said all infield spots and suite space are full.