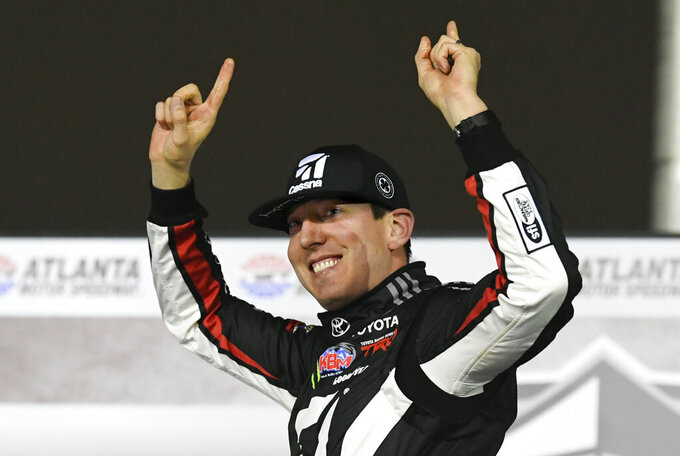 FONTANA, Calif. (AP) — Kyle Busch has become the most wanted man in two NASCAR racing series, and he's ready to rise to the challenge.

Everybody in the Cup Series was already chasing Busch, both the defending series champion and the defending winner of the annual early season race at Auto Club Speedway this Sunday.

Busch also became the target of an extraordinary bounty in the Truck Series this week, with Kevin Harvick and team owner Marcus Lemonis putting up $100,000 for any Cup Series driver who can end Busch's dominance on that circuit. What began as a little bit of Twitter sniping has evolved into a full-fledged competition for cash around Busch, who wasn't even involved.

“Bring it on,” Busch said with a smile Friday.

At least a few Cup drivers intend to.

Chase Elliott and Kyle Larson entered the competition Thursday night when they joined GMS Racing to challenge Busch in three of his four remaining Truck Series races this season. Elliott will drive the No. 24 Chevrolet Silverado at Atlanta Motor Speedway in two weeks and again at Kansas Speedway in May, while Larson — whose attempt at a Twitter joke sparked the whole thing — will drive at Homestead in Miami in three weeks.

“It’s really not about the money to me,” Larson said. “I think it’s a cool, fun kind of challenge, and I look forward to trying to beat him. And if the money is still out there when I do get that chance, it’ll be a lot of fun. But Kyle Busch is the best. It doesn’t matter what type of car he’s in. It’s not going to be easy. It never is, no matter what car or truck you’re in.”

Denny Hamlin also wants to race against Busch in Virginia in April, but the Toyota driver has to find a team — and Kyle Busch Motorsports probably isn't giving him a ride.

Busch still seems a bit bemused by the interest in taking him down. But as a Truck Series team owner himself, he isn't mad about the competitive excitement being added to a sometimes low-profile circuit.

“I think it's going to be interesting, exciting, whatever you want to term it,” Busch said. “I think it's a unique opportunity for more attention on the (Truck) Series, which is good. Maybe if more drivers had more teams and had rides, then there would be something else there besides myself."

Busch's avid participation in the Xfinity and Truck Series has been a topic of contention for years in NASCAR circles, with some believing his elite driving talents in superior equipment take all the fun out of his races.

Busch has won a whopping 26 Xfinity races — nearly half of all the races he has run — in the past half-decade. He has also won the last seven consecutive Truck Series races he has entered since 2018, driving his own team's truck and claiming the winnings that help to fund KBM for the rest of the season. Cup Series drivers are limited to five Truck Series races every year.

"I guess Cup drivers in Truck Series do sell tickets, so, you know, take that for what it's worth,” Busch said, pointedly referring to critics who don't believe his Truck dominance helps out the series at the box office.

Larson partly sparked this excitement last weekend when he tweeted three cherry emoji in response to a tweet celebrating Busch's Trucks victory in Las Vegas. Harvick took the tweet to mean that Larson was suggesting Busch is cherry-picking easy wins in Trucks.

Larson said Friday that that's not what was on his mind.

“It was really a joke,” Larson said. “I’m not offended with Kyle Busch wins Truck races. I actually like it a lot, because I feel like it helps expose the guys that are good and the ones who aren’t. I think when he does win and he has to battle for the wins, I think it shows which kids are really good. So I just dropped some cherries on there because when I do win dirt (track) races, I do get a lot of that as well. It was more of a dig at the NASCAR fans.”

Harvick spearheaded the effort to knock off Busch in the Truck Series, but the veteran driver did it because of his support for Busch's desire to race at every level. By offering the bounty, Harvick also sparked some of the excitement that some fans feel is lacking when Busch races.

“I messaged Harvick after I read that article, just to explain what I was thinking when I wrote that tweet,” Larson said. “He understood now. Yeah, but I was like, ‘I’m glad it did upset you enough to put the bounty up, because it’s a good opportunity for us Cup guys.’ I wish that it would roll over to a Truck Series regular if they were to beat Kyle because it should be for the whole field, I think.”

Busch is already handicapping his Truck Series competitors for the next few months: He believes Larson has the best shot to beat him at Homestead.

“It’s brought a whole new chatter to it,” Busch said. "Whether that’s excitement or just chatter, I’m not sure which. I think we’ll see when we get to Atlanta what the grandstands look like and how the race goes.”