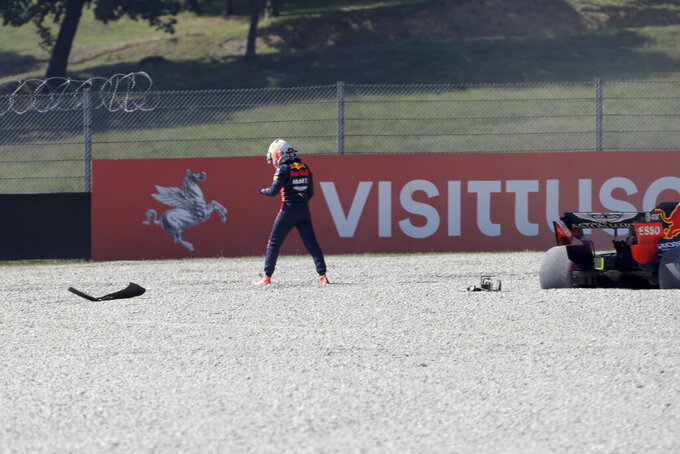 Red Bull driver Max Verstappen of the Netherlands stands next to his car following a crash during the Formula One Grand Prix of Tuscany, at the Mugello circuit in Scarperia, Italy, Sunday, Sept. 13, 2020. (AP Photo/Luca Bruno, Pool) 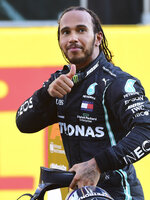 Formula One champion Lewis Hamilton kept his cool amid the mayhem caused by an unpredictable circuit, winning a crash-marred Tuscan Grand Prix on Sunday for the 90th win of his incredible career to move one behind Michael Schumacher’s record.

But Hamilton's focus was elsewhere as he stood on the podium wearing a T-shirt featuring the words “Arrest the cops who killed Breonna Taylor." The message was in capital letters on the front of his black shirt.

Taylor, a 26-year-old Black emergency medical technician, was fatally shot by police as officers attempted to serve a no-knock search warrant at her apartment on March 13. The shooting has sparked months of protests in Louisville, Kentucky with calls for the officers to be charged in her death.

“Justice for Breonna Taylor,” Hamilton said. “It took me a long time to get that shirt, and I’ve been wanting to wear that and bring awareness to the fact that there’s people that have been killed on the street and there’s someone that got killed in her own house.”

The first F1 race on a Mugello track with super-fast corners usually used by MotoGP riders was incident-packed. Two crashes on the first seven laps saw six drivers go out, and a red flag suspended the race for the first time after the second one.

A second red flag late on following Lance Stroll's heavy crash meant another grid restart — on Lap 46 of 59 — and gave Valtteri Bottas another chance to beat race leader Hamilton if he made a strong start from second.

“With all those restarts, total focus was needed,” Hamilton said. “It was really, really hard.”

Hamilton held firm and Bottas is now 55 points behind Hamilton, who is odds on to equal Schumacher's record of seven F1 titles.

“It was all a bit of daze. It was like three races in one day. Just incredibly tough today,” a relieved Hamilton said. “This track is phenomenal and keeping Valtteri behind was not easy."

Bottas pushed hard and got to within 1.1 seconds of Hamilton on the penultimate lap but the British driver clocked a fastest lap on the last one to take a bonus point.

“That is how it goes. I will just keep trying to get better," Bottas said. "It has to turn out well for me at some point.”

Red Bull driver Alexander Albon drove well to finish third and clinch a first career podium that will boost his chances of keeping his seat alongside team star Max Verstappen next year.

“It was brutal, especially the high speed. It is more adrenaline going in my body than anything else,” Albon said.

Hamilton can equal Schumacher’s record at the Russian GP in two weeks.

The race was far from easy for Hamilton, however, and he looked out of breath sitting in his car moments after crossing the line.

He had started from pole position for a record-extending 95th time but was overtaken by Bottas’ brilliant move off the line.

“It was a dream start for me,” said Bottas, who could not profit from it because of the imminent crashes.

Verstappen started third for Red Bull but he and Pierre Gasly crashed moments in, bringing the safety car out on Lap 1.

Verstappen got clipped by Kimi Raikkonen’s Alfa Romeo after falling back because of engine problems. Carlos Sainz Jr. somehow avoided getting seriously hit when his McLaren span in the middle of the track and cars swerved around him.

After the safety car ended, a zig-zagging Bottas backed everyone up. Some of the cars tightly bunched at the back were early on the throttle after presuming the race was back on, accelerating into the middle of the pack.

Chaos ensued as Antonio Giovinazzi’s Alfa Romeo speared into Kevin Magnussen’s Haas and Nicholas Latifi’s Williams while Sainz then slammed into the back of Giovinazzi.

“It’s really dangerous like that. Those at the front have to think of those behind,” Giovinazzi said. “We were flat out.”

No drivers were hurt but several were angered by the tactics deployed at the front.

“They want to kill us or what?” asked French driver Romain Grosjean, who narrowly avoided crashing. “This is the worst thing I have seen.”

When the race re-started it was on the grid, meaning Bottas was on pole ahead of Hamilton.

But Hamilton got a tow on Bottas and passed him easily, and Bottas was nearly eight seconds behind Hamilton when he came in for new tires on Lap 32.

If he was trying to undercut Hamilton, by forcing him to come in one lap later, it backfired and with 20 laps remaining Hamilton was still six seconds ahead.

Then, Stroll’s Racing Point flew over the gravel and the car’s front smashed into the barriers. The red flag nullified Hamilton’s lead and gave Bottas another shot at victory.

But he failed to take it.

Ferrari reverted back to an age-old burgundy livery for its 1,000th F1 race, reflecting the color first used by the famed Italian manufacturer. But there was little to celebrate as Charles Leclerc finished eighth and Sebastian Vettel 10th.

Verstappen, meanwhile, was angry with his team after a second straight retirement following the Italian GP last weekend, where Gasly won his first F1 race.

“Similar issue to what I had in Monza. No power,” Verstappen said. “It’s the second time we lose points like that, it’s stupid.”