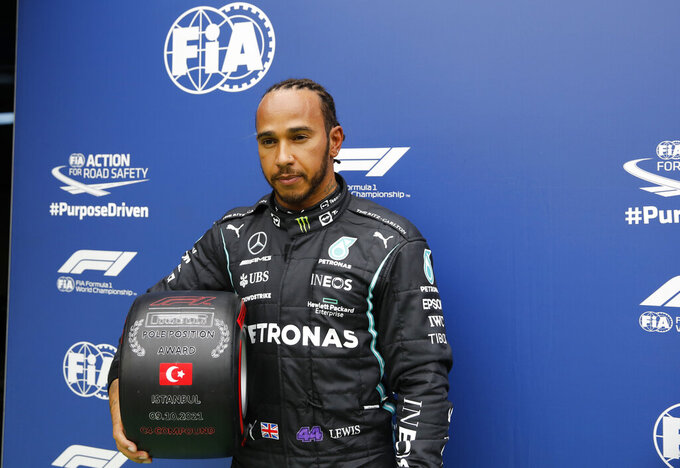 Mercedes driver Lewis Hamilton of Britain, with his award for winning pole position after the end of qualifying for Sunday's Formula One Turkish Grand Prix at the Intercity Istanbul Park circuit in Istanbul, Turkey, Saturday, Oct. 9, 2021. Hamilton who took pole position will start 10th due to a penalty with Mercedes driver Valtteri Bottas of Finland who came second promoted to pole, for the race. (Umit Bektas/Pool Photo via AP)

Lewis Hamilton mitigated the damage from his 10-place grid penalty at the Turkish Grand Prix by posting the fastest time in Saturday qualifying. It should have given the world champion his record-extending 102nd Formula One pole, but it didn't count in the record books.

Instead, Hamilton will start 11th on Sunday as penalty for changing the internal combustion engine on his Mercedes, and teammate Valtteri Bottas assumed the pole. Max Verstappen, locked in one of the tightest championship fights Hamilton has faced, will start second alongside Bottas.

Hamilton knew he would lose 10 spots on the starting grid, which made qualifying critical. The penalty puts Verstappen in strong position to close the two-point gap on Hamilton in the standings as the championship fight goes down to the wire. The Turkish Grand Prix is the first of seven races remaining on the schedule.

After the qualifying session, Hamilton, Bottas and Verstappen all thought Formula One should reconsider its regulations and the pole should still be counted. The rule is in place to address reliability concerns and Mercedes has gone over its allocation of three combustion engines for Hamilton this season.

“That was my best pole ever,” Hamilton joked. “I got pole, I don’t think the penalty should affect that necessarily.”

“Lewis had the fastest single lap. He was technically on pole but afterwards he gets dropped and I don’t think it’s really fair," Bottas added.

Even Verstappen sided with the seven-time champion he has sparred with on-track all season.

“The guy who does the fastest lap should deserve pole position,” Verstappen said.

Hamilton finished .13 seconds ahead of Bottas and .33 ahead of Verstappen. Charles Leclerc of Ferrari moved to third with Hamilton's penalty, while Pierre Gasly of AlphaTauri moved to fourth.

Verstappen, meanwhile, will try to pass Bottas on the start and then pass Hamilton in the championship race. Headed into the 5.3-kilometer (3.3-mile) Istanbul Park circuit, the Dutchman leads Hamilton with seven wins this season, but Hamilton, with only four wins, has a two-point lead in the standings.

“I hope for a clean getaway but starting on the inside will be tricky," Verstappen said. “There is very low grip in both dry and wet conditions compared to the outside. We’ll try everything we can to keep the Mercedes behind, but it’s not going to be easy, they’ve had great pace all weekend.”

Hamilton is seeking a record-extending 101st victory but will have a long drive to the front through quality traffic. Two-time F1 champion Fernando Alonso, Lando Norris of McLaren and Verstappen’s teammate Sergio Perez will all start ahead of Hamilton.

“I’ll give it everything. Overtaking isn’t the easiest at the moment and we’re all on the same tire,” Hamilton said. “We’ve got the long straight down the back, so we’ll see what we can do. Hopefully we can give the fans here a good race.”

Bottas is seeking his first win of the season and could get it this time with Hamilton perhaps too far back to challenge.

"I’m on pole so should be good," the Finnish driver said. “Max is starting next to me and the Ferrari has looked strong this weekend, so it’ll be a tough race but we’ll give it our all. We have a good race car, I just need to keep the focus on my own race, avoid mistakes and stay ahead."

Mercedes principal Toto Wolff found positives at the end of qualifying and had faith Hamilton can fight through traffic.

“Lewis can only try and do his best, and I wouldn’t want any other driver in the car when it is about overtaking and going through the field,” Wolff said. "The big positive is that the car is very quick and Valtteri starts on pole. The negative is that it would have otherwise been a weekend with a front-row lockout for the team.

“Progress will be tough for Lewis with all cars in front of him ... but Lewis has made phenomenal recovery drives time and time again, and there’s no one else you’d want in the car.”

Mick Schumacher cruised into the second qualifying group and ended up 14th for Haas.

Carlos Sainz was 15th for Ferrari but didn't make much of an effort in qualifying because he was already relegated to the back of the field for taking on a full new power unit.

“It was a pity we were not trying for a fastest time,” Sainz said. "It is difficult to take, but looking at the big picture it is better to take the penalty now and have a better engine for the remainder of the season. The pace has been encouraging all weekend so we are ready to fight our way up the order as much as possible. Bring it on.”

The Sainz penalty moved Daniel Ricciardo to 15th for McLaren.

Nicholas Latifi was 17th for Williams. Antonio Giovinazzi and Kimi Räikkönen were 18th and 19th for Alfa Romeo, with Nikita Mazepin 20th for Haas.