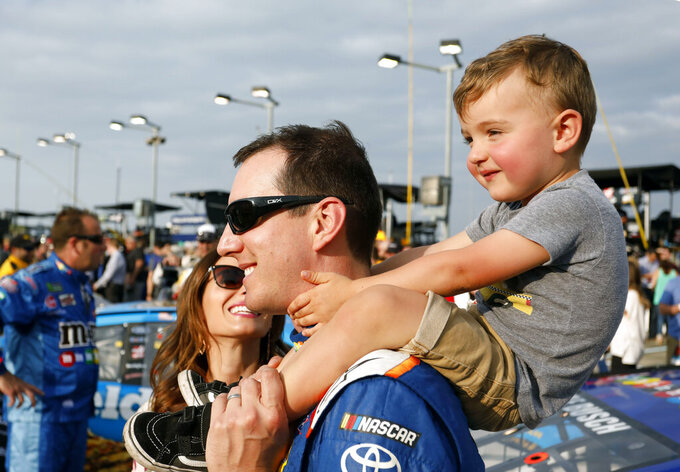 FILE - Kyle Busch carries his 2-year-old son, Brexton, as his wife, Samantha, left, watches before the NASCAR Cup Series auto race at Kansas Speedway in Kansas City, Kan., Saturday, May 12, 2018. Kyle Busch will move to Richard Childress Racing next season, ending a 15-year career with Joe Gibbs Racing because the team could not come to terms with NASCAR’s only active multiple Cup champion. Busch will drive the No. 8 Chevrolet for Childress in an announcement made Tuesday, Sept. 13, 2022, at the NASCAR Hall of Fame. (AP Photo/Colin E. Braley, File)

Sure, there’s still seven races remaining before Busch turns in the keys to the No. 18 Toyota. But two blown engines in the first three playoff races knocked him from contention, and from now until the November finale, Busch is just riding out the JGR string.

He already has found a new home: Richard Childress Racing snapped up the only active driver with multiple Cup championships.

As a signing bonus, Childress presented Busch with a Rolex watch. And told Busch he can run the Indianapolis 500 with a Chevrolet-backed team.

The whole thing seemed surreal on so many levels.

As a history lesson, Childress in 2011 tried to fight Busch after a Truck Series race and even removed his timepiece before the confrontation. He told a handler to “hold my watch” right before the fight that earned the Hall of Fame team owner a $150,000 NASCAR fine.

And then there's the reality of what RCR has become over the last 15 years. Childress fields a two-car team that last won a Cup title in 1994 with the late Dale Earnhardt. Busch, a two-time champion with 60 career wins, is 37 years old and likely has a decade of racing in him.

There's also the messy July announcement by Tyler Reddick that he was leaving RCR at the end of the 2023 season to drive a Toyota for 23XI Racing. RCR barely had a chance to start discussions on a long-term extension and Reddick's defection — even though he gave the team a year to fill his seat — seemed to be a crippling blow.

“We're focused on winning the championship in 2022 and 2023,” Childress said in a terse statement the day Reddick announced his move, “although the timing could not be any worse.”

RCR has fallen on hard times and long ago lost its place among the NASCAR elites. Reddick leaving could have been devastating with all the sponsor alignments and notion that Reddick was a key piece of Childress' rebound.

He needed a splash replacement.

Kyle Busch, come on down.

It is Childress who got the last laugh, despite Toyota's stunt to have Reddick “bomb” a scheduled media Zoom for the surprise reveal that he was going to drive for Denny Hamlin and Michael Jordan. Toyota thought it had pulled a fast one over on Childress, a former NRA board member who in 2017 shot at three intruders who broke into his home.

His response was to snag the prized jewel of the Toyota fleet. Busch is not only Toyota's winningest driver at all three NASCAR national levels, but his Kyle Busch Motorsports program is Toyota's flagship Truck Series program.

Busch now returns to Chevrolet — where he started his career as an 18-year-old with Hendrick Motorsports — and his trucks also swap over to a Chevrolet team. It marks the biggest free agent signing in NASCAR since 2007 when Rick Hendrick fired Kyle Busch to hire Dale Earnhardt Jr.

“When we talked about winning races and winning championships, I looked in his eye and I’d seen that look in Dale Earnhardt Sr.’s eye," Childress said of his new driver. “He’s hungry. We’re gonna win.

“When all the (Busch) rumors started and you’d walk through the race shop, the excitement in people’s voices when they’d ask, ‘Is Kyle Busch really coming here to drive for us?’" Childress continued.

Childress even got his revenge on Reddick, a two-race winner and playoff qualifier with the No. 8 team. Childress said Busch will drive Reddick's car next season, with Reddick's crew chief, and he'll stick Reddick in a third Chevrolet that doesn't even exist yet to finish his contract.

Of course, that's only if Childress isn't looking for a buyout from Toyota or 23XI to get Reddick a year earlier than planned. 23XI has two cars, but Kurt Busch has been sidelined with a concussion since July and his return is uncertain. Hamlin said 23XI is planning on Kurt Busch returning next season and a contingency plan that doesn't include Reddick is already in place.

“I looked at it from the business point of view. They’re looking ahead to the future and what’s going to be best in the long term,” Reddick said. “I’m sure I could understand how people could think it is personal, but I’m not looking at it that way. For the long term of RCR, it makes sense to put him in the 8 car.”

When it all comes down to it, the credit for signing Busch falls on Austin Dillon, Childress' grandson and driver of the No. 3 Chevrolet. It was Dillon who told his grandfather to put the 2011 fight with Busch in the past and to focus on what Busch can bring to RCR in the future.

“It was about what’s the future of RCR, and where to go from here? In my mind, there was one guy in free agency who anyone would love to have,” said Dillon, who believes Busch can "elevate your competition side right off the bat. And he moves the needle when it comes to marketing. He really does. He has a huge fanbase.

"When it comes to Kyle, he wants to go fast and win races. The people in our shop are really excited to have a guy with his kind of experience. We want to make the Welcome, North Carolina, race team compete at the top each week and be looked at as a competitor. We’re on an upward trajectory, so we need to keep that going.”