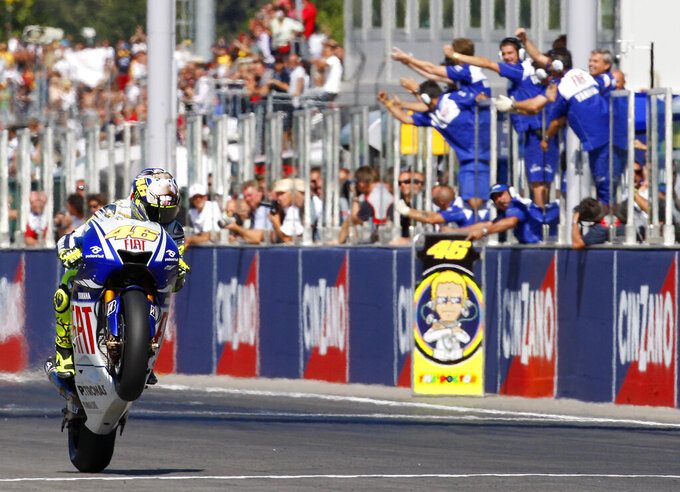 FILE - Yamaha rider Valentino Rossi, of Italy, crosses the finish line to win the San Marino MotoGP at the Misano circuit , in Misano, Italy, on Sept. 6, 2009. Record-breaking motorcycle racer. Charismatic showman. Italy's most popular athlete for years. Valentino Rossi was all that and more. He competed in his final race Sunday at the Valencia Grand Prix. He's the owner of nine world titles that include seven in the premier class. He's considered the greatest modern driver in his sport. (AP Photo/Antonio Calanni, File)

Valentino Rossi, who competed in his final race on Sunday at the Valencia Grand Prix, was all that and more.

The owner of nine world titles — including seven in the premier class — is considered the greatest modern driver in his sport.

Rossi was so popular in Italy that Ferrari offered him a chance to test in Formula One and at his first opportunity in 2006 he was competitive with Michael Schumacher and faster than several other drivers in the four-wheeled sport.

At his final race, video messages for Rossi were shown on the television broadcast, including those from actors Tom Cruise and Keanu Reeves as well as athletes Roger Federer, Rafael Nadal, Lewis Hamilton, Gianluigi Buffon and Andrea Pirlo.

Former Brazil striker Ronaldo waved the checkered flag at the end of the race, marking the last time the Italian veteran crossed the line.

Rossi had announced he would retire earlier this season.

Sunday was his 372nd race in the main series, where he won 89 times and had 199 podium finishes.