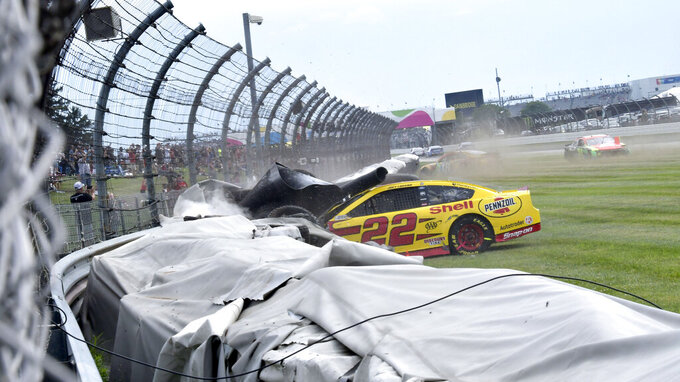 Just about everyone else left the world-famous speedway frustrated, angry or bewildered by a bizarre Brickyard 200 finish that involved 16 wrecked cars, two red flags, a spin out of the race leader and a penalty all in the final five laps to help Allmendinger reach victory lane.

The 39-year-old Allmendinger beat Ryan Blaney across the yard of bricks by 0.929 seconds to pick up his second career Cup win in his fourth start of the season. It also was the first win for Kaulig Racing in the team’s seventh start.

“Oh my God, I just won at Indy. Shank I just wanted to be like you,” Allmendinger shouted to the crowd, referencing Michael Shank’s win at the Indianapolis 500. “It was just survival of the fittest.”

Allmendinger’s other victory also came on a road course, Watkins Glen in 2014.

Indianapolis’ 14-turn, 2.439-mile road course certainly proved to be a challenge for everyone on this wild crossover weekend. After watching one IndyCar and two NASCAR Xfinity Series drivers go airborne in the sixth turn Saturday, track officials removed the “turtle” there.

On Sunday, drivers were having trouble with the chicane in the back-to-back fifth and sixth turns. The damaged obstacle, NASCAR officials said, had deteriorated by the end of the race. Whether that was because three consecutive days of practice, qualifying and racing was unclear.

Track workers still attempted to fix it during the race and once pulled a 3-foot metal piece from underneath it.

When pole-winning driver William Byron ran over the curbing with five laps left, it was chaos. His No. 24 car veered off course and eight more drivers quickly followed him, immediately bringing out a yellow and eventually the first red flag.

“It was so weird,” said Byron, who first noticed it when Kyle Larson’s car went over the obstacle ahead of him. “I nailed something and it tore it up.”

This time, the track workers pried it loose and towed it away to the sound of cheering fans. Even Indianapolis Motor Speedway President Doug Boles pitched in by grabbing a shovel and broom to help clean up in his suit and tie.

When the engines restarted, nobody knew what to expect or how to navigate the altered course. And the next time through the turn, seven more cars were involved in the pileup bringing out another red flag.

NASCAR officials did not report any serious injuries.

“There was some debate about whether to continue and whether to take the other one out,” NASCAR vice president of competition Scott Miller said. “When we tested there last year, that section was way too fast so we weren’t going to sign up for that, so we keep the other one.”

The drama was just beginning.

With Denny Hamlin in the lead on the final restart, Chase Briscoe’s second-place car went skittering through the grass between the first two turns and back onto the track. The two raced side-by-side briefly before Hamlin pulled slightly ahead heading into the 10th turn.

That’s when Briscoe spun out Hamlin, apparently unaware he had been assessed a penalty. Hamlin finished 23rd but dropped to second place in the points because after Larson finished third, Briscoe wound up 26th.

“Just a lack of awareness,” Hamlin said. “I don’t think he did it maliciously He’s not that kind of person. This just turned everything upside down.”

Actually, things were upside down all day at a race that seemed more apt on a short track.

At one point, Brad Keselowski hit a concrete wall and pitted with the back part of his car dragging. Several cars used duct tape to keep parts together and while some drivers inadvertently wound up in the grass, others were punted off the track. And after the big melee, the damage was evident up and down the stopped car line.

Somehow, in the midst of all of it, Allmendinger made his way to the front and led only two laps — the last two.

“I was so mad yesterday because I wanted to win so bad,” he said, dedicating the victory to familiar racing media figures Bob Jenkins and Robin Miller. “I never could have imagined this is how this would play out.”

Tyler Reddick won the first two stages, gaining crucial points toward a playoff spot. He beat Richard Childress Racing teammate Austin Dillon to the yard of bricks both times with Dillon finishing third in the first stage and moving up one spot in the second.

Many drivers from all three series lined up to watch other drivers compete over the weekend. Ind yCar driver Rinus VeeKay watched from the infield Sunday. Ryan Hunter-Reay stuck around, too.

But none embraced the crossover opportunity more than Daniel Suarez and IndyCar championship contender Pato O’Ward, who did their formative driving in Mexicco.

“I haven’t seen him in so long, it was really really nice to see him,” O’Ward said after finishing fifth Saturday. “I hope we can get to more racetracks together because we started at the same racetrack. He’s a great, great guy, great family. I’ve always enjoyed having him around.”

After back-to-back road races, the Cup circuit returns to an oval next Sunday at Michigan International Speedway.