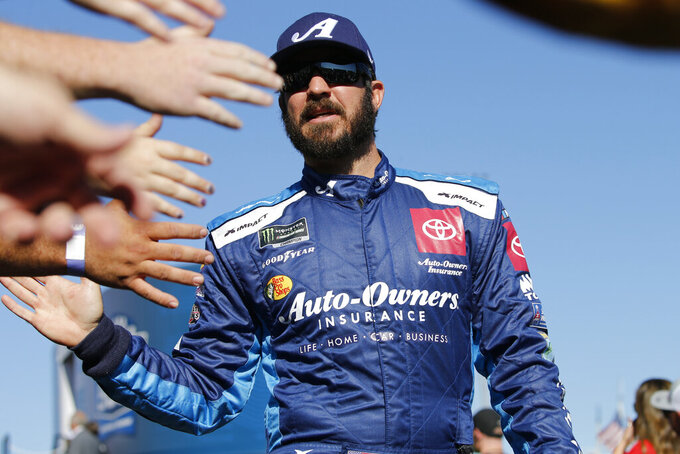 DAYTONA BEACH, Fla. (AP) — Martin Truex Jr. has signed a multi-year agreement to stay at Joe Gibbs Racing, where the 2017 NASCAR champion has won eight races in his two years with the team.

Truex joined Denny Hamlin as JGR drivers who signed contract extensions this month. Truex, Hamlin, Kyle Busch and Christopher Bell are all signed at Gibbs at least through 2022.

“This is where I wanted to be and to continue building on the success we have had together the past two years,” Truex said Wednesday.

Truex — whose late-career metamorphosis from journeyman to champion was unprecedented in NASCAR history -- signed with Gibbs after Furniture Row Racing folded after the 2018 season. Truex won the 2017 Cup title with FRR and was series runner-up in 2018 and 2019. He had only one win driving the No. 19 Toyota and finished seventh in the points standings last season.

“Extending Martin’s agreement has been a big priority for us this off season,” Gibbs said. “Obviously he’s talented and shown he can win at any racetrack but his insights also helps to make all our teams better.”

Hamlin, a three-time Daytona 500 champion, kept FedEx as his primary sponsor but the company did not make a full-season commitment as in years past.

Truex hopes Sunday he can knock off one major achievement missing on his resume. He is 0 for 16 in the Daytona 500 and was runner-up to Hamlin in the closest finish in race history in 2016.

“We’ve been trying for a long time. It’s a tough race to win,” Truex said. “We’ve been really close. I think for us, trying how to be better at speedway racing is something in general that we’ve worked on over the last handful of years.”

Truex had three career Cup Series wins in his first 10 full seasons until his career exploded in 2016 at FRR. He’s won 24 races over the last five years and blossomed into a perennial championship contender.

“There was a lot of opportunities for us last year to have a great season and we came up short on a lot of those little key areas and decisions or little mistakes along the way,” Truex said. “Hopefully, we will find some speed in our race cars this year going into the season and we can put it all together.”