Women-led race team gearing up to run in Indianapolis 500 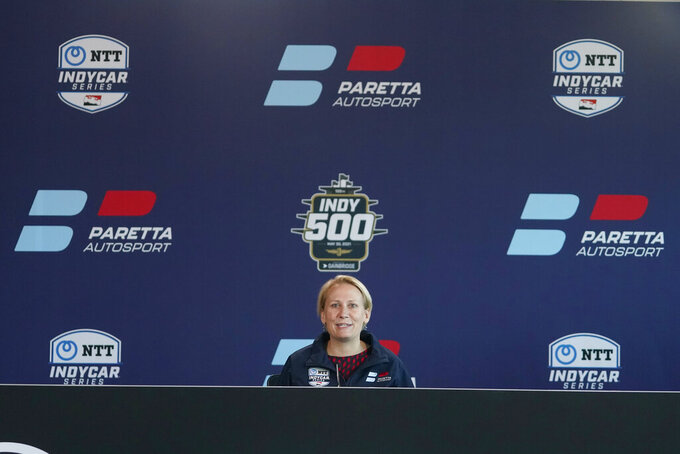 Beth Paretta speaks during a news conference at the Indianapolis Motor Speedway, Tuesday, Jan. 19, 2021, in Indianapolis. Paretta and Swiss driver Simona de Silvestro are teaming up to put a female-run race team in this year's Indianapolis 500. (AP Photo/Darron Cummings) 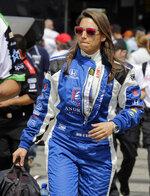 INDIANAPOLIS (AP) — Beth Paretta has a vision for her new IndyCar team.

She wants to send the first female driver to victory lane at the Indianapolis 500 with the support of a predominantly female cast. And then Paretta hopes to turn it into a full-time pipeline for women in racing.

On Tuesday, she announced the formation of Paretta Autosport and the intention to run this May at Indianapolis. Additional races could be added later this year, she said, with the hope of competing in every IndyCar race next season.

“I didn’t grow up in a racing family, I grew up as a racing fan and I could not have dreamed this for myself," Paretta said at Indianapolis Motor Speedway. “It’s that idea if you find something that you love and you work hard at, maybe the result isn’t a race team but there’s somewhere you can fit. There's something there for you.""

Paretta certainly wants to make an impact on girls, who might feel left out in what has largely been a male-dominated sport.

But she also wants to send another message: Don't give up on big dreams.

Paretta took this route once before when she announced she would form an all-female team with driver Katherine Legge to qualify for the the 100th running of the 500 in May 2016. But when Paretta’s team couldn’t find a suitable car just weeks before the race, the effort stalled.

“The car we had wasn’t race worthy, really," she said. “Could we have run it? Maybe. But there’s extra scrutiny on a program like this."

Now she's back with a five-time 500 starter, Simona de Silvestro, and some assistance from Team Penske, the most successful team in Indy history. The team founded by series owner Roger Penske will provide technical support for Paretta Autosport and the two will initially work together at Penske's headquarters in North Carolina.

The 32-year-old Swiss driver and 2010 Indy 500 rookie of the year will attempt to qualify for the traditional 33-car starting grid in the No. 16 Chevrolet.

De Silvestro finished a career-high 14th in 2010 but last competed at Indy in 2015 when she finished 19th with Michael Andretti’s team. She also has has competed in Australian Supercars, Formula E and IMSA SportsCars. She also was a development driver in Formula One and has been a factory driver for Porsche since 2019.

“I think it’s going to be the best opportunity for me yet with everyone involved believing in the same goals so we can be successful when we come in May," De Silvestro said. “And I hope it inspires more women to follow their dreams."

The announcement comes less than three months before IndyCar's season opener in Birmingham, Alabama, and less than five months after the rescheduled 500 ran without a female driver for the first time since 1999. This year’s 500 is set for May 30.

Paretta intends to hire women in all facets of the operation — competition, administration, logistics, marketing and public relations. And the blueprint fits as part of IndyCar's outreach to create more diversity in the sport.

If De Silvestro starts the race, Paretta would join a long list of female owners to compete at Indy — a list that includes M.A. Yagle, who owned the winning car in 1929, the late Mari Hulman George and owner-drivers Sarah Fisher, Janet Guthrie and Lyn St. James, among others.

“This is a powerful moment that meets our goals for Racing for Equality and Change," IndyCar chief diversity officer Jimmie McMillian said. “We want to create a pipeline for engineers, for owners, for drivers and how to run a team with the help of Mr. Penske and Tim Cindric. That's very important because I think once we get that pipeline going, I don’t think it will stop."

For Paretta, it's another chapter in a pioneering career.

She served as an executive with Street and Racing Technology and was hired at Fiat Chrysler Automobiles as the first female director to lead a performance brand and motorsports for an original equipment manufacturer. In that role, Paretta played a part in three championship-winning seasons from 2012-14, including Penske's first NASCAR Cup Series title in 2012.

Paretta also serves on the the board of Motorsports Hall of Fame of America, but she has a bigger goal.

“Our team, along with our technical alliance with Team Penske, will work hard to give Simona the best car we can provide so she can achieve her best results," Paretta said. “The Indy 500 is the greatest race in the world, and one day soon we hope to have a woman’s face on the Borg-Warner Trophy.”