Viva Las Vegas: F1 adds Strip as it expands to 3 US stops 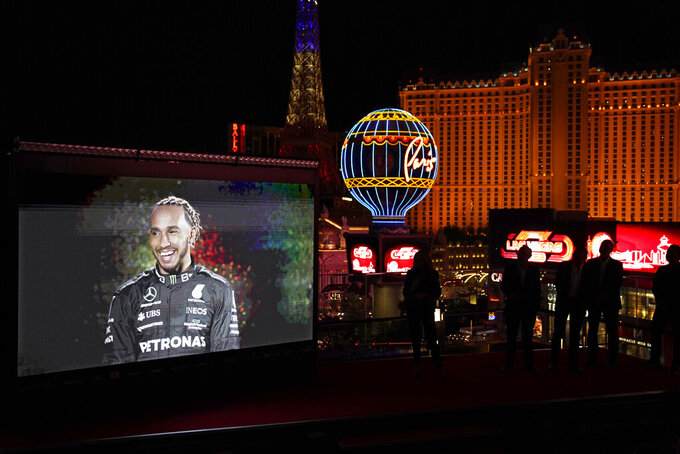 People watch as a recording of Mercedes driver Lewis Hamilton, of Britain, is projected onto a screen during a news conference announcing a 2023 Formula One Grand Prix auto race to be held in Las Vegas, Wednesday, March 30, 2022, in Las Vegas. (AP Photo/John Locher)

LAS VEGAS (AP) — It's been 40 years since Formula One last ventured into Sin City for back-to-back Las Vegas races staged in the parking lot of the Caesars Palace hotel.

The European-headquartered series raced in Las Vegas in 1981 and 1982, then packed up with little incentive to return. Then came new ownership, slick marketing, a Netflix docuseries and a historic championship battle that all helped F1 explode in popularity throughout the United States.

The U.S. will be the only country on the 2023 calendar to host three F1 races in one season following Wednesday's announcement of a Saturday night race down the famed Las Vegas Strip. F1 has raced at Circuit of the America’s in Austin, Texas, since 2012, and in May it will make its debut in Miami.

Barring any surprises, existing races in Mexico City and Montreal will bring F1 to North America five times next season.

Is it too much for one market?

Bobby Epstein, president of COTA, believes there's enough interest to sustain three U.S. races. He could barely draw 100,000 spectators over a three-day weekend five years ago; COTA had more than 300,000 last year and is already sold out for its October race.

F1's first race in Miami this May sold out in one day.

“Before we opened, there was very little interest or awareness in America about Formula One because they had no presence here," Epstein told The Associated Press. "The first few years, it’s hard to know if you have a bright new shiny object or you have something that people really love and come back for and aren’t just curious about.

“What you can’t buy is history and you can’t buy tradition. You have to make it and earn it. The crowds here have told us we’re absolutely doing something right.”

NASCAR is the top U.S. series and already races 13 miles away from The Strip at the oval at Las Vegas Motor Speedway. NASCAR last week made its second appearance at COTA.

IndyCar is the American version of F1 and the most diverse series in the world with its mix of road and street courses, as well as ovals. But the open-wheel series has never challenged F1, even as European drivers are now migrating to IndyCar.

F1 didn't much focus on the U.S. until Liberty Media Corp. bought the rights to the series in 2017. The American company has since targeted U.S. expansion and received a massive boost from the Netflix docuseries “Drive To Survive.”

Season four dropped ahead of the F1 season opener this month and Netflix said the behind-the-velvet rope peek inside the series ranked No. 1 in 33 countries its opening weekend. ESPN, meanwhile, said viewership for Sunday’s race in Saudi Arabia broke the week-old record for the network and was ESPN’s largest F1 audience since 1995.

“The momentum of Formula One has been demonstrated over the last several seasons and we've seen that potential turn into a reality as we watch our fanbase really grow around the world, but especially here in the U.S.,” Greg Maffei, President and CEO of Liberty Media, told The Associated Press.

F1 will promote the event alongside Liberty, which is taking on the additional role because of its belief in the market. F1 signed an initial three-year contract for the race, but the exact race date was not revealed beyond that it will be a Saturday night in November on a temporary 3.8-mile street course that will utilize the iconic Las Vegas Boulevard.

“This is somewhat different for us in that we're taking a larger role because of our belief in the opportunity and our belief in Las Vegas,” Maffei said.

Added Stefano Domenicali, the CEO of F1: “The best racing on the planet will be in the entertainment capital of the world. Formula One has huge momentum and we are growing around the world and the United States is a massive focus for us, there is no doubt about it.”

No other country hosts more than two races a season. Nevada Gov. Steve Sisolak said the city expected 170,000 visitors on race weekend to account for 400,000 nights of hotel rooms and an estimated economic impact of half a billion dollars.

But as F1 chases the U.S. dollar, it does so with very little American representation.

Michael Andretti, son of 1978 F1 champion Mario Andretti, is desperate to land a two-car team and a $420 million takeover of the existing Sauber team collapsed late last year. Andretti has since applied for expansion to the 10-team grid.

He'd like to bring to F1 driver Colton Herta, the Californian who turned 22 on Wednesday and is an IndyCar title contender. Herta has signed a testing contract with McLaren and will be evaluated by that team later this year.

Maffei was quick to point out that F1 already does have an American team; Haas F1 is owned by American businessman Gene Haas, who operates part of the organization alongside its NASCAR operation in North Carolina.

But Haas was the worst team in F1 last year and Andretti has publicly called on Haas to sell the F1 team to him. Haas has refused to sell and through the first two races appears to be a much improved team.

Gene Haas was forced to drop both his Russian driver and the sponsorship Nikita Mazepin brought from his father's fertilizer company following Russia's invasion of Ukraine two weeks before the season opened. The team has somehow emerged stronger and scored points in the first two races of the season.

F1 and Liberty agree the series needs more American representation — teams, drivers, sponsors, all of it — but Domenicali said it cannot be an artificial effort. F1 won't admit a team owner just to further its growth in the U.S.

“It's important, but it has to be real,” Domenicali told AP. “People are making a difference, they are the protaganist. But it has to be real, (the driver) has to be quick, because otherwise it would not work. It is a journey that is not easy to accomplish. It will take time, but for sure, is in our focus.

“From the commercial point of view, from the organizer, or promoter point of view who wants to develop the business in the U.S., an American woman or man driver would be very good.”